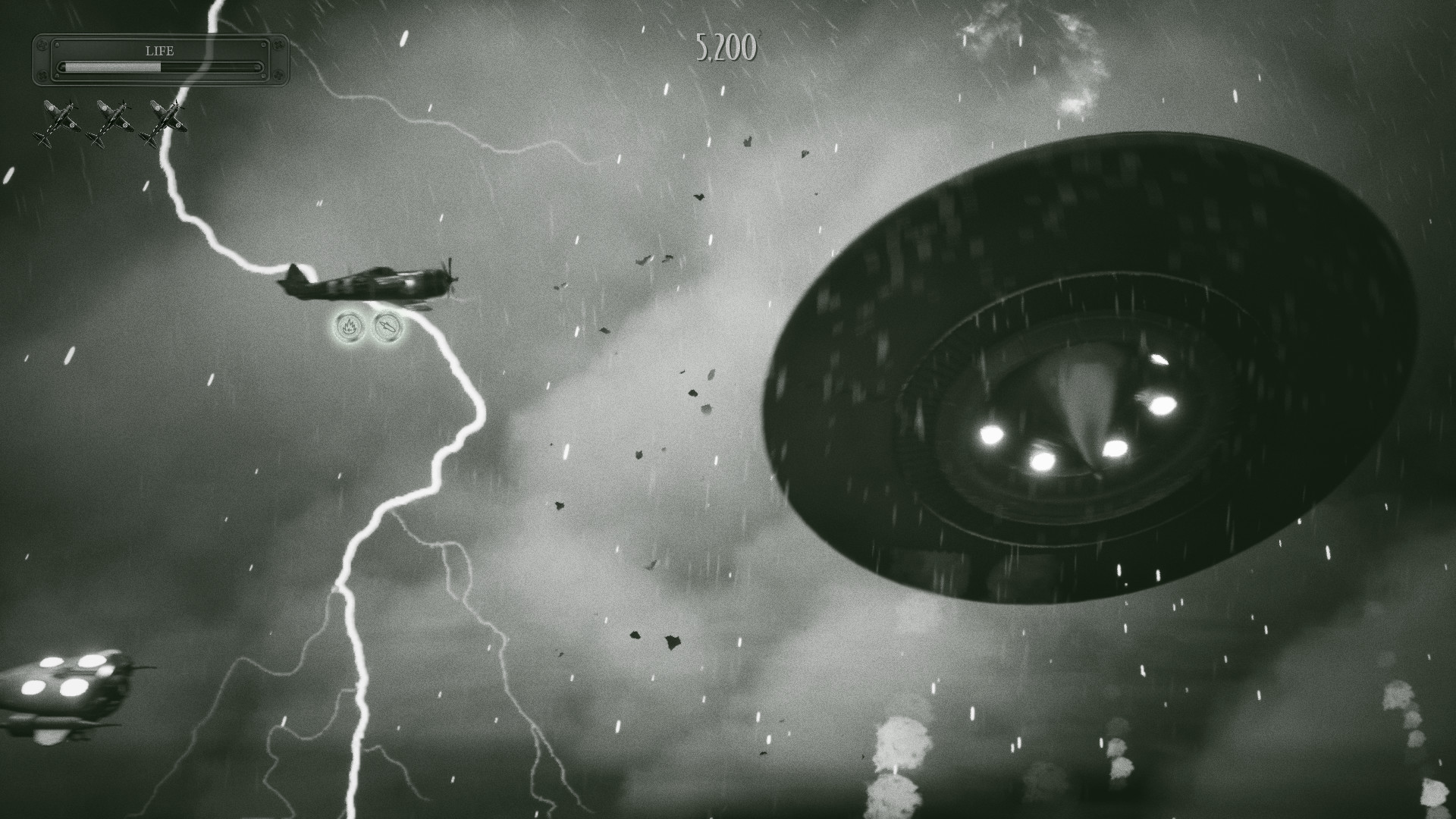 Travel back in time to a land before colored TV. Squadron 51 places players in an epic battle against spaceships in a 2D shoot ’em up style adventure. This is a combination of fast-paced action with a sci-fi movie aesthetic from the 1950s. Live the action, defeat the invaders, and enjoy live-action cutscenes mixed with unique animation and digital style.

The world is being invaded by aliens. Director Zarog, a powerful alien leader has decided to enslave mankind and force them to work for Vega Corporation. Become a piece of the resistance and face a fleet of flying saucers that are more advanced by hundreds of years. What you lack in tech, your team makes up for with courage and spunk as you take on the alien fleet.

In Squadron 51 players take on the evil director Zarog as they blast through endless waves of flying saucers. The fate of all of the world is in your hands, and it is only the 1950s. Fly aircraft, fire bullets, and dodge lasers in this unique mixture of styles and cultures.

The game has four different aircraft for players to use. Each one comes loaded with a special weapon designed to make each vehicle unique. Pick your plane, choose a weapon, and blast those aliens back to where they came from.

The game is presented in a unique black and white aesthetic. By mixing live-action sequences, dubbed voices, and FMV sequences players can enjoy the battle between Squadron 51 and Director Zarog.

Enter a unique blend of 2D and 3D environments as you play through 11 levels. From snowy mountains to cityscapes players will travel the world in their quest to destroy Zarog’s forces.

This game supports a dynamic difficulty system that allows players to enjoy the game no matter their skill. Choose a starting setting and watch as the game adapts to your skill to provide a challenging but not impossible experience for fans of all ages.

Squadron 51 does allow for multiplayer support. Bring in a second player at any time and earn points together as you battle on the same maps and defeat the alien invaders.

There is more information available from Whisper Games main website. Embrace the 1950s and defeat an alien menace that is well beyond anything Earth as faced before.

Squadron 51 is planning a launch on Steam for 2021. For an official release date, fans must wishlist the title and wait for a later announcment.

Aug 25, 2021 Harry Alston 2930
After the huge success of New World's Closed Beta that ran at the beginning of August, the game was delayed until September 28th. While the Closed...

Aug 20, 2021 Harry Alston 2110
Humankind is a gigantic game: 4X at its most compelling, complicated, and addictive best. The combat system is fantastic, the art style and the...

Aug 12, 2021 Harry Alston 3320
It's a good day to be a Battlefield fan. 2042 is currently in its earliest playtest - designed to stress-test servers and other functionality rather...