Minecraft Mobs Explored: The Zombie Horse, One Of The Fastest Ways Of Public Transportation

When using the Zombie Horse spawn egg, there is a 20% chance that the horse will spawn as a foal. This is a baby horse, and players are unable to ride these horses as the only way to spawn a tameable horse is with a command line.

The Zombie Horse features a total of fifteen health points or 7.5 hearts of health, and the height of the adult Zombie Horse is 1.6 blocks with a width of 1.3965 blocks meaning if players want to use this horse, they’ll need at least two to three blocks free to be able to ride this horse and effectively.

Unlike normal horses that features two different inventory slots, one for a saddle and another for horse armor, The Zombie Horse only has a single inventory slot that is used for the player to add a saddle to this horse easily. 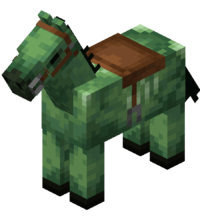 Another feature that is unlike other horses is that the Zombie Horses slowly regenerate health. Also, since they are labeled as an undead mob, they take damage from a potion of healing and are healed using a potion of harming.

The only current way get a tamed version of the Zombie Horse is tp use the command line of /summon Minecraft:zombie_horse ~ ~ ~ {Tame:1b} As the Zombie Horses that are spawned using a spawn egg are entirely untameable. 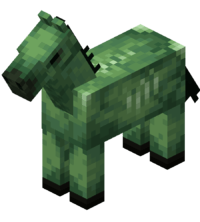 For their behavior, Zombie horses follow the standard horse behavior tree, which is to stop to rear, swish their tails, or lower their heads as though eating the grass. One point to note is that even if the Zombie Horse does the eating animation, no grass is consumed in the process.

If Minecraft players are looking for the fastest way around their Minecraft world, then a Zombie Horse may just be the perfect option for you, with their faster speed and regenerating ability. These horses are both durable and quick when riding!