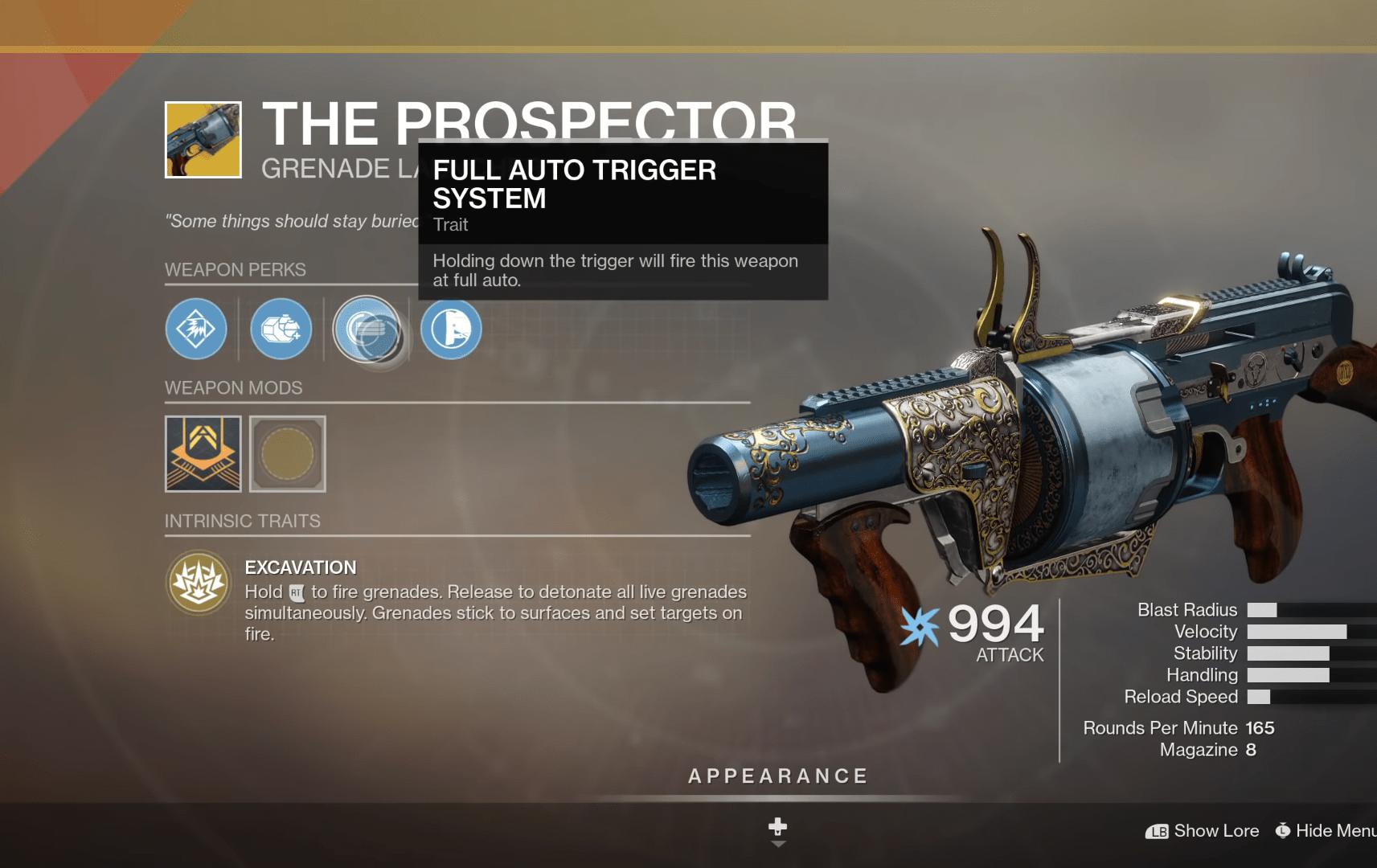 This week on Destiny 2, Xur is back offering yet another brand new selection of goods to enjoy. If you don’t know the deal on Xur, he is the only vendor in the game that offers exotic weapons and armor. Xur’s location and stock rotates weekly, and he will stay in his current location from May 29th, until the weekly reset next Tuesday.

Xur has a promising selection this time, with the Prospector grenade launcher, The Bombardiers, Doom Fang Pauldron, Crown of Tempests, and the Fated Exotic Engram. The Fated Exotic Engram is the most expensive item, costing 97 legendary shards, but it’s well worth it. The engram is guaranteed to hold exotics that the player has not yet received if there are any left to collect.

The Prospector is an exotic grenade launcher that packs quite a punch when it comes to burst DPS potential. The exotic perk Excavation reads,

What this boils down to, is that this launcher can be a powerful weapon for killing bosses, but must be utilized correctly in order to unleash its full potential.

Next up is the warlock class this week, who are able to grab the Crown of Tempests. This is an old exotic, but a classic for the Stormcaller subclass. The exotic makes Arc energy kills increase both the recharge rate for arc abilities, and extend the duration of the Stormtrance super. If you don’t have this helmet yet for some reason, be sure to pick it up this week.

Titans come in next with the Doomfang Pauldrons, which is another solid choice for those who prefer the Sentinel Shield. This exotic can create a gameplay loop that is pure fun, with Void melee kills granting Super energy.

Additionally, while the Sentinel Shield super is active, melee kills will recharge Shield Throw. The Shield Throw itself also extends super duration on kills, which is useful is both PvE and PvP arenas.

Hunters have a spicy new option in the form of the Bombardiers which were dropped last season. These exotic greaves make dodging dangerous as well as graceful, as dodging drops a bomb that detonates after a short delay.

This ability has some notable drawbacks in all types of activities, but it is a flashy and fun option that is great aesthetically as well.

That about wraps up the inventory from Xur this week. Xur is located in the Tower Hanger and will leave his post come this Tuesday. Next Friday he will restock and relocate, so be sure to tune in for that information as it comes.