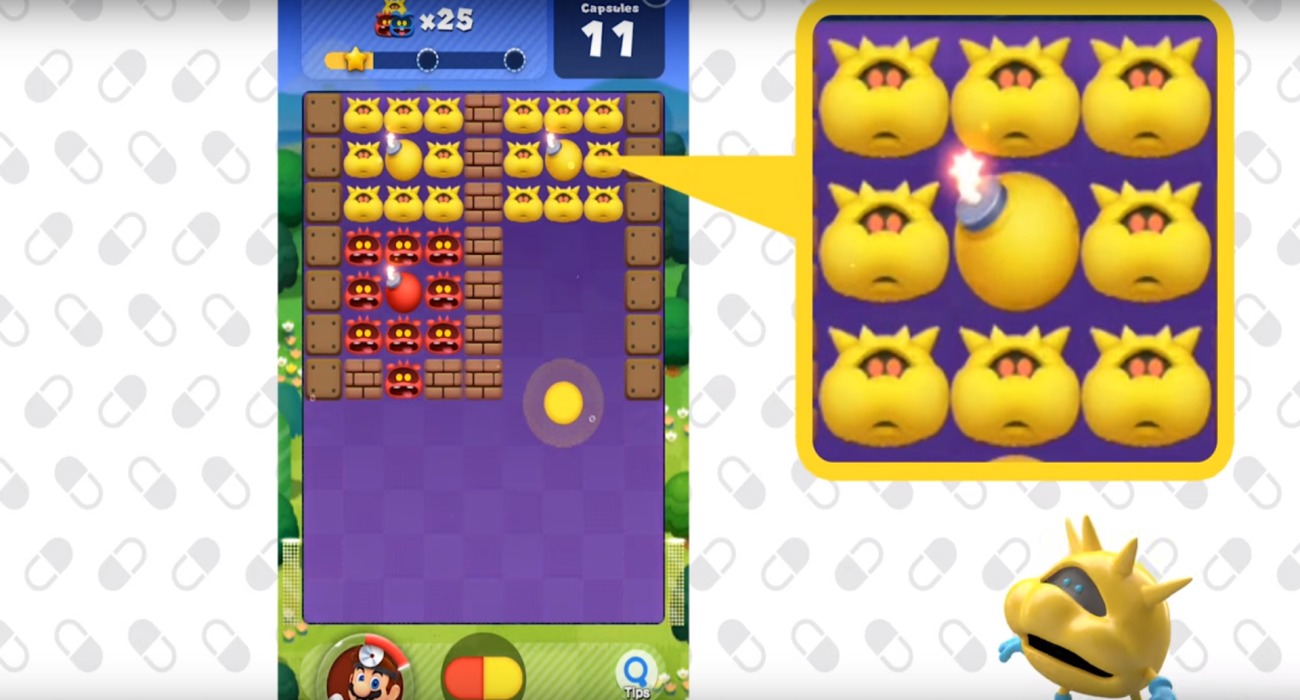 Mobile games are still as popular as ever. A lot of them are free-to-play and let gamers take their experiences on the go. There have been a lot of great announcements in the mobile gaming marketplace as of late, and you can add Dr. Mario World to that list.

The game is — of course — being brought to the mobile marketplace by Nintendo. It has a July 10th release for both iOS and Android devices. It’s a type of puzzle game with a pretty simple premise: Eliminate viruses by matching up medicine capsules by color. So far, it seems to play a lot like Candy Crush — one of the most popular mobile games ever.

There is one unique distinction in Dr. Mario World, though. The capsules, instead of falling down like most puzzle games, float upward. To complete each stage, players will have the chance to use all sorts of power-ups and skills. You’re rewarded the more you play.

Another unique feature of this game is there will be different characters to play with. Some of these will include Dr. Bowser, Dr. Yoshi, and Dr. Peach. Each one possesses a unique set of skills and abilities, thus giving you the ability to fall in love with a particular style of play.

As mentioned up above, this mobile game is completely free to play. However, it will be monetized. Just how does Nintendo plan to achieve this, though? Well, like a lot of puzzle games that can be downloaded from the marketplace right now, there will be a timed feature. After you run out of stamina, you’ll have to wait until your hearts refill. If you pay money, you can get back to the game instantly. It’s not that bad of a monetary system compared to a lot of other mobile games.

For the most part, Dr. Mario World seems like a fun game that will be great to take on the go. It brings all of the great characters that fans of the Super Mario Bros. series have come to know and love. There seems to be a good bit of variety in terms of playable characters, as well as the stages you’ll have access to.

If you want to give it a chance, you don’t have to pay a dime. Who knows? It might be one of those mobile games you find yourself playing time and time again when you’re out of the house.

Aug 4, 2020 Harry Alston 5010
Xbox announced today that owners of Game Pass Ultimate will be able to stream 100s of Xbox games to their mobile devices from September 15th. News...

Feb 16, 2020 Aaron Hans 4630
The developers behind The Witcher, CD Projekt Red, have confirmed that Gwent: The Witcher Card Game will be coming to Android next month, as they...

Sep 28, 2019 Jeremy Green 4400
Minecraft is without a doubt one of the most popular video games of this generation. It's beloved by many for its simple graphics but limitless...