Ranked mode is a long-awaited addition to Apex Legends. Creating a ranked mode for a Battle Royale game is not an easy task. Few games in the past have managed to create a mode that works. So far, Battle Charge, Season 2 of Apex, looks to have a creative solution to old problems.

In a post from the devs behind ranked mode comes some of the juiciest details yet. The ranked mode will work from Bronze to Apex Predator, and each division has four sub-divisions (Bronze IV, Bronze III, Bronze II, Bronze I and so on).

Dive in to the team's philosophy, goals, and the nuts and bolts of how Ranked Leagues will work when it arrives with the start of Season 2 on 7/2.

Players are put into matches with other teams of matching skill. There is matchmaking preference for pre-made teams of three, 2+1, and 1+1+1, which is how Apex Legends matchmaking works for the ordinary game mode as well.

The point system works on ‘Ranked Points’. Kills offer 1 RP up to 5 per game, and a top ten finish, a top three finish, and a win are how you really start gathering points. It’s difficult to see whether this will encourage camping in the mode, though the devs made it clear in the comment section they will be watching data closely to make sure ranked is as fun as possible.

The ranked mode also offers rewards for the top players. From Gold onwards, you are awarded a weapon cosmetic at the end of the season, for Diamond, Platinum and Apex Predator you also get a brand new type of cosmetic: dive trails. This is a clever way to show off your rank in normal matchmaking modes. 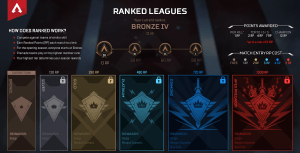 It looks like the Apex Legends Elite Queue provided a good platform for the devs to test mechanics before the full release of ranked in Season 2. Loss forgiveness is an important feature, especially in a game which is known for its poor connection problems. Code:leaf, anyone?

Thankfully, Respawn listened and have pledged to keep an eye on the loss forgiveness system. In an attempt to combat the cheating problem, which is set to ruin ranked mode completely, they’ve set a level 10 cap for those who can queue in ranked.

Overall, the ranked mode for Season 2 looks well thought out and should begin to draw back some competitive players who’ve drifted from the game over the last months.

Bug In Your USD-Type C Connector, A Culprit To Why Your Windows 10 PC Is Powering Down Slowly, Microsoft Confirms The Glitch