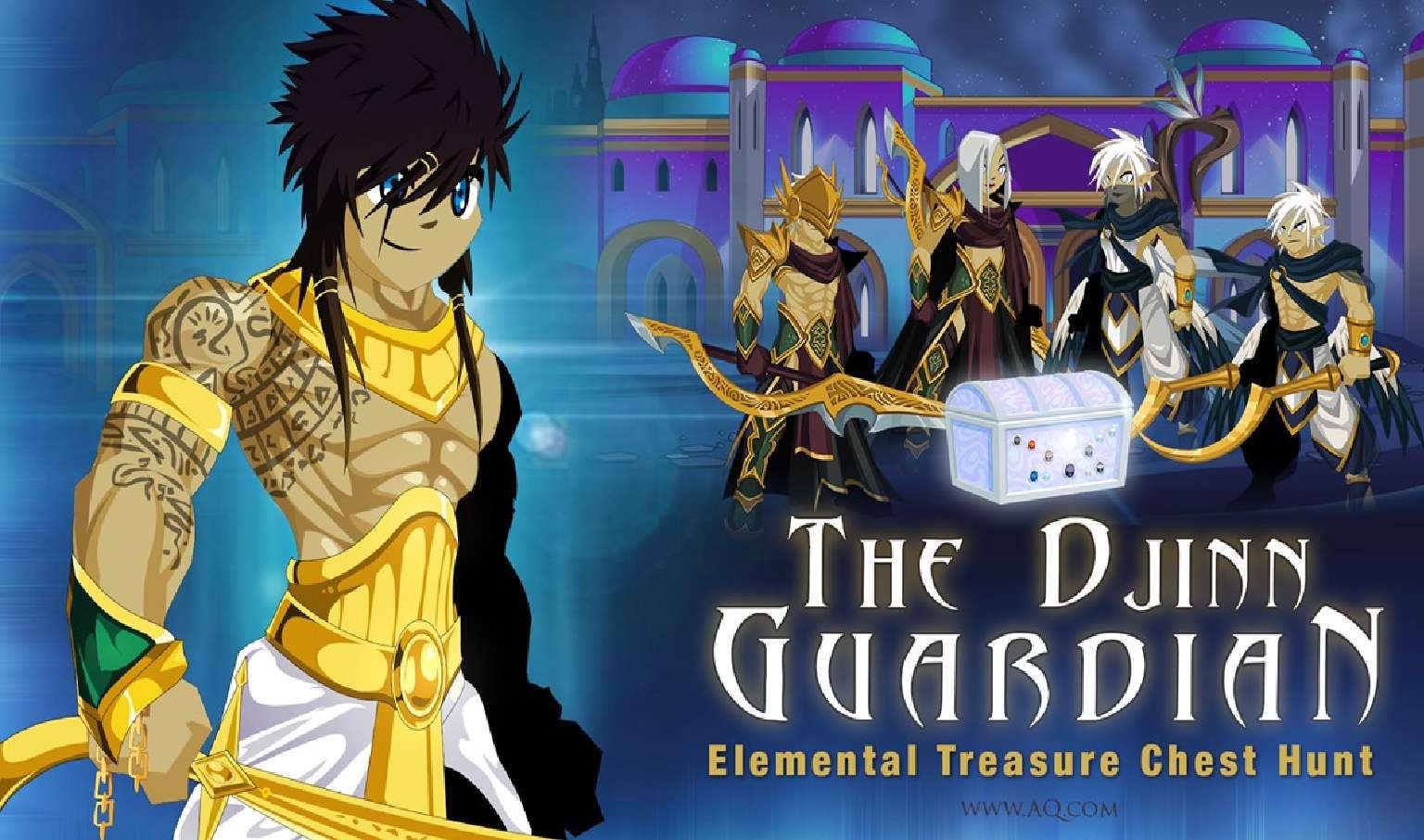 Another staff member’s birthday has passed, and with it comes yet another event. This time, it’s the Treasures of the Djinn Guardian.

Crulon is the member of the Artix Entertainment staff that celebrated his birthday earlier this month and the AdventureQuest Worlds has completed the finishing touches for this event. And as with many members of the Artix team, Crulon was a fan. Crulon won awards from the team for fan art and was eventually found by AdventureQuest Worlds project lead, Alina, bringing him in as a contract artist in 2017.

As for Crulon’s events, since he is a Djinn Guardian, he came across a LOT of mystical chests. Last year, Crulon found one locked with three magical seals. Players will need to decipher his riddles, locate the monsters, and fight to get the seals you need.

To get access to this quest, players will need to talk to him in /djinn to begin his quests. Complete his Seal of Approval quest to collect the pieces of the Serpent Knight gear. Players will find his Sandsea Enchanter set in his birthday shop or the Featured Gear shop in your game menu.

Also coming along with this quest is the Artist Alley Showcase: 2020 Edition. This event is in recognition for all the talented artists that work for the Artix teams and showcases the amazing artwork of these talented artists.  The wanted to recognize their talent by giving each of them space in-game to craft gear that they felt most showed who they are as artists.

Th see these items, players will want to /join artistalley to meet them and see all of the items they’ve crafted especially for you! The developers found Crulon, Arlette, Lae, Darkon, Kotaru, Dage the Evil, J6, Ghost, and many of their other artists when they began playing the Arti games, and they want to recognize their efforts.

Every weekend, a new set of artists are focused on, and this past weekend featured Crulon, Item Artist Extraordinaire, Arlette, J6’s landscape/map background apprentice, Kotaro, Bido, Ferozakh, PP2, and Hikari.

However, the artist alley also has shops for other artists on the team. The ships include works from Aegis, Aranx, and Arklen, Blade, Dage, and Diozz, Ghost, Hizu, J6, and Jemini, Memet, Mido, and Nulgath, Roroth, Solrac, and Veneeria, Vokun and Zoshi, Lae, Tyronius, Kotaro, Bido, Ferozakh, PP2, and Hikari.

AdventureQuest Worlds continues to make fun content that their staff can be proud of. So check out artist alley, complete the Crulon questline, and BattleOn!

Bad News For All Of You Post-Apocalyptic Zombie Survival Fans: Dying Light 2's Release Has Been Delayed