Developer of visual novels Voltage Inc. has announced its newest mobile to Nintendo Switch port. One of their most popular titles, Love Letter from Thief X, is now part of the developer’s Switch library.

In the past year, Voltage Inc. has focused efforts on porting some of its most popular mobile titles on the Switch. Unlike the mobile games, players can purchase the main title and access multiple character storylines instead of one character at a time. Players can also purchase additional character bundles to access full versions of stories for others.

Voltage Inc. develops visual romance novels targeted towards women. The novels are originally released in Japanese and months or years later into English and other languages.

In these types of visual novels, players choose the character they wish to romance, and then playthrough 10-20 chapters where they meet, befriend, and date. Some of the more popular stories also feature multiple seasons and side stories.

Love Letter From Thief X is about an infamous band of thieves called “The Black Foxes.” The player takes the part of a museum curator who is being targeted by the thieves. These thieves want to steal the curator’s masterpiece, which was created by her grandfather. The protagonist decides to join them so that the masterpiece isn’t sold to the wrong person. As she gets to know them, she falls for one of the thieves, which changes their lives forever.

The Nintendo Switch version is packaged with the main stories for Takuto Hirukawa, Kenshi Inagaki, Hiro Sarashina, Riki Yanase, and Atsumu Kashiwabara. Takuto, Riki, Hiro, and Atsumu’s stories until “The Wedding” are included, plus “Licensed to Wed” for Kenshi.

The game was initially released in Japan in January 2011 and later in English in December 2020. Players tap multiple dialogue choices to progress the story and lead to one of the multiple endings.

Love Letter From Thief X is only available as a digital download from the Switch eShop, similar to Voltage Inc.’s other releases. Previously, Voltage Inc. has released Enchanted in the Moonlight, Star-Crossed Myth, Kissed by the Baddest Bidder, and Our Two Bedroom Story onto the Nintendo Switch.

Voltage Inc. no longer offers its mobile apps as standalone titles. They are now all packaged within the Love 356 app. Players on Nintendo Switch can purchase games separately.

Love Letter From Thief X is available now on mobile and the Nintendo Switch. 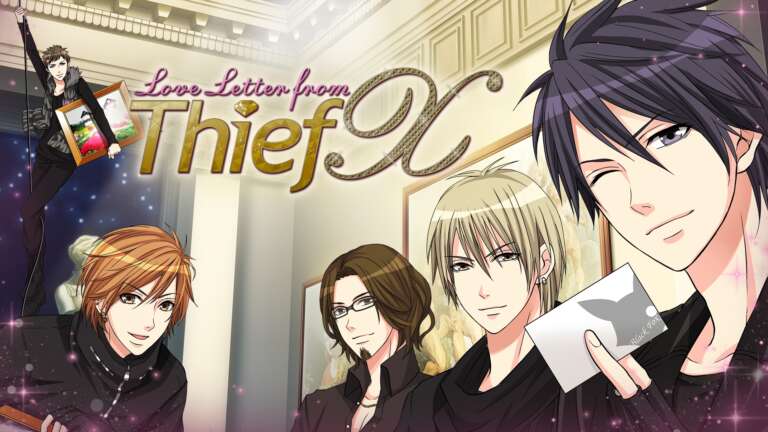 Jul 26, 2020 Lisa Nguyen 6930
Developer of visual novels Voltage Inc. has announced its newest mobile to Nintendo Switch port. One of their most popular titles, Love Letter from...