Leading up to the 2020 League of Legends World Championship, the season will feature two “superweeks” in week one and week eight of the split. During these “superweeks,” games will be played from Friday to Sunday.

The split will also include two one-week breaks after week four, when the first round-robin has been completed, and week eight, ahead of the playoffs. Riot said this is meant to allow for flexibility in the schedule.

Here’s the schedule for the first week of the 2020 LEC Summer Split. 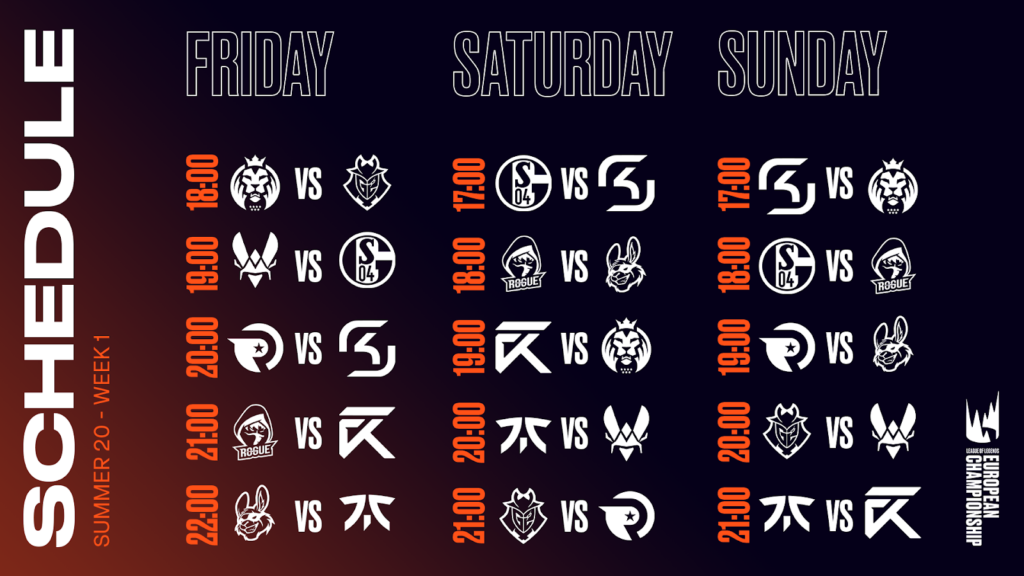 The finals for the LEC will be held on Sept. 5 and 6. The European Masters and EU Masters Finals have been moved to Sept. 19 and 20 to ensure that there’s no overlap with the LEC.

The European league has yet to determine when and how it will safely bring the LEC back to a live studio audience in Berlin, but this will likely be updated in the near future. The LEC is sticking true to its plans to host the finals in Malmö, Sweden, though the league is working on backup scenarios in case there are any unforeseeable circumstances.

G2 Esports are the reigning champions of Europe, having won three consecutive LEC titles. If Fnatic, Origin, MAD Lions, or even Rogue want to leave their mark in the summer, they’ll have to take on G2.

But lucky for them, Europe is getting a fourth seed at Worlds 2020 due to this year’s Mid-Season Invitational being canceled by Riot Games.

While fans were waiting for international competition, the emerging situation and current evolution of COVID-19 makes that unpracticable since players cannot fly out or into other regions due to local restrictions. As a result, the best thing to do is to sit tight and wait for it to pass over.

While some fans requested an online MSI tournament, the request is non-feasible due to ping issues which will occur for a teams outside the server host region. There were some discussions about hosting mini Rift Rivals tournaments, but that is still pending, therefore everyone is currently taking breaks and going with the flow of what’s going to happen.

LEC’s Spring Split was a huge success both in terms of viewership and high-quality gameplay, Summer Split should not be any different. Stay tuned for more details in the upcoming days about the future of LEC and other regions.

Jul 5, 2022 Tom Lee 360
A new League of Legends champ is on the way, and she's begun her corruption campaign in an unexpected place - on the game's history page. Astute...