Publisher GameMill Entertainment has announced Cobra Kai: The Karate Kid Saga Continues for consoles in late October. The game is based on the drama Cobra Kai that debuted on YouTube Red but was later launched on Netflix. The game leans towards a more cartoonish, cel-shaded animation style rather than using realistic 3D models.

The game focuses on the events within the first two seasons of the drama. William Zabka provides the voice for Johnny Lawrence, while Daniel LaRusso is voiced by Ralph Macchio. Unlike the original The Karate Kid series, the Cobra Kai series focuses more on Johnny Lawrence as he rebuilds the Cobra Kai dojo.

Cobra Kai: The Karate Kid Saga Continues is a two-player game reminiscent of side-scrolling beat-em-up games from the 90s like Streets of Rage and Battletoads. Players will get to choose from a variety of characters from the show, but with a few additional power-ups. There are 28 story missions, unique combos, upgrades, and skill trees.

Cobra Kai tackles both opposing dojos. Daniel LaRusso, the protagonist of the main film series, has rebuilt the Miyagi-Do Karate in honor of his late sensei. Meanwhile, Johnny has rebuilt the Cobra Kai dojo with his neighbor, a teen named Miguel Diaz as his rising star. By the end of the second season, both dojos were instructing several students, causing plenty of drama on both sides.

A new trailer showcases some of the characters and locations the game takes place in, such as the opposing dojo’s, LaRusso Auto Group, tournament gym, and the high school all of the teens attend.

As for the playable character roster, Johnny and Daniel are featured primarily in the trailer. Reese, who reappears in Season 2, also makes an appearance. Several of the teens will be playable as well, including Miguel, Hawk, Samantha, Tory, Robby, and Demetri. While Aisha and Bert are shown in some of the animated scenes, it’s unknown if they’ll be playable characters.

The trailer also showcases one of the animated moves. After Hawk attacks one character, an image of a hawk appears behind him. This is similar to the sound effects played when Hawk fights in the drama.

There are multiple unlockable endings for the game. If a player wants to unlock the ultimate ending, they’ll have to play through both the Miyagi-Do Karate and Cobra Kai storyline.

As for Season 3 of the live-action drama, the latest Netflix trailer states it will debut in 2021. 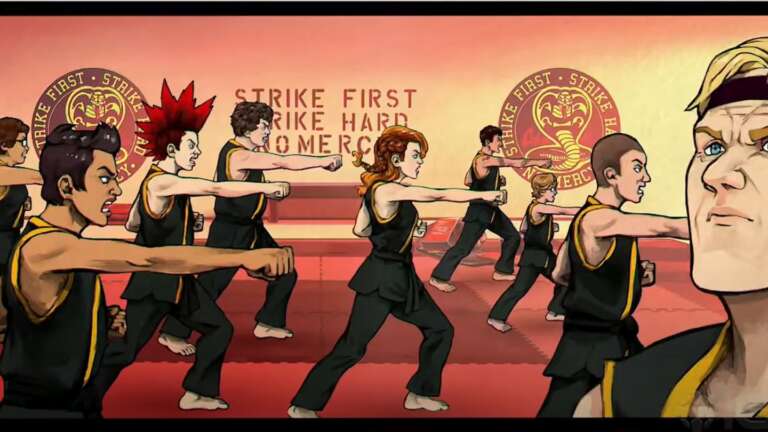 Aug 26, 2020 Lisa Nguyen 11200
Publisher GameMill Entertainment has announced Cobra Kai: The Karate Kid Saga Continues for consoles in late October. The game is based on the drama...