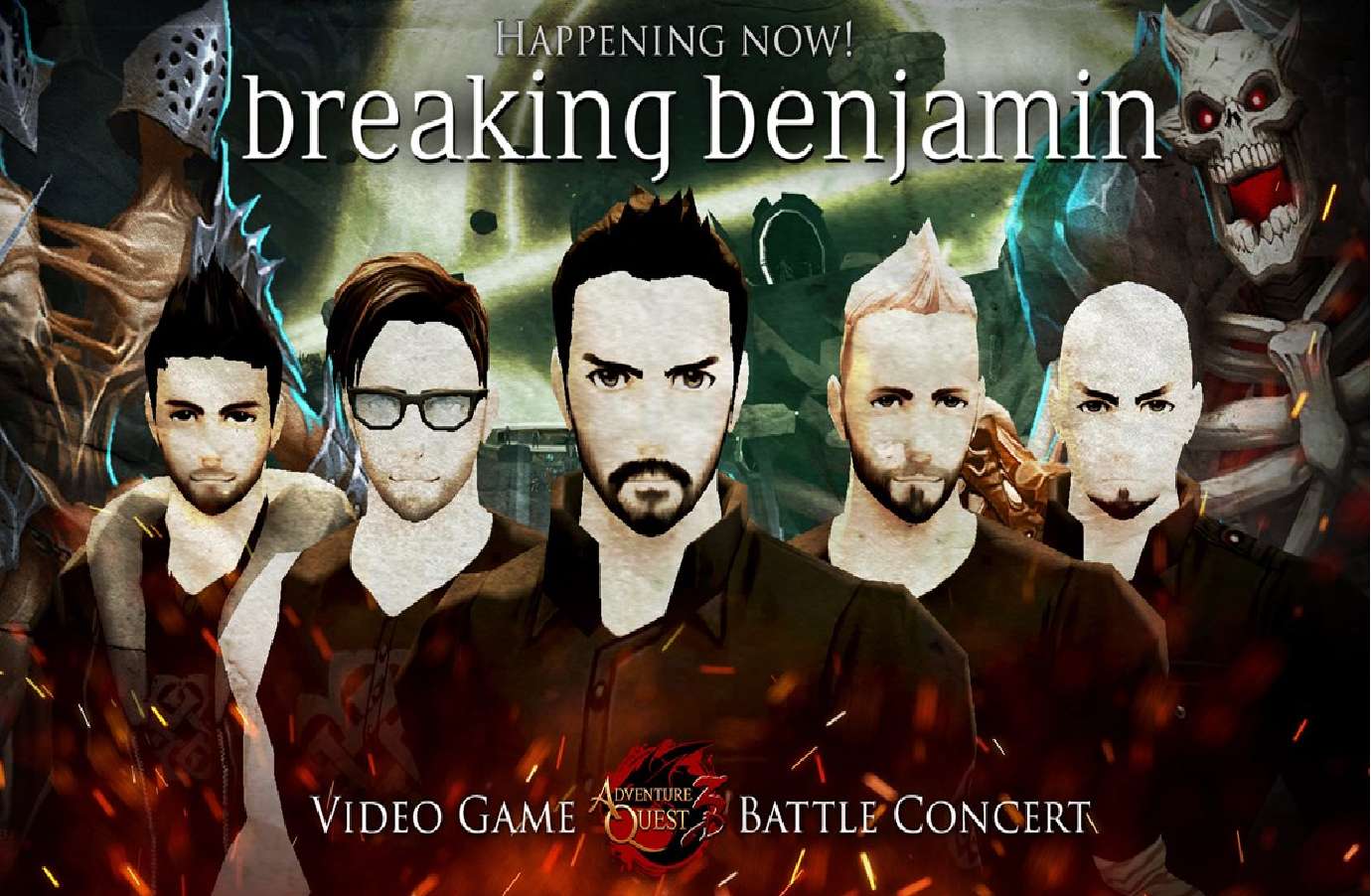 It’s finally time for Breaking Benjamin to perform for the Artix fanbase! Come and see their battle concert until March 8, 2020!

Breaking Benjamin is performing in AdventureQuest 3D & AdventureQuest Worlds right now. Fans of both the games and the band can join in for an otherworldly video game concert on monster-infested islands floating in the cosmic void.

This battle concert will have new features. In the AdventureQuest 3D version, it will feature parkour, portals, and titan fights. And like the previous battle concerts, this event was created for gamers of all skill levels to enjoy. But if just a fan of the music comes in for the concert, there is no pressure to join in on the battles.

Breaking Benjamin is a multi-platinum rock band with nine #1 hit songs. Some of the Artix staff favorites include The Diary of Jane, I Will Not Bow, Angel’s Fall, and Torn in Two. This concert will be in support of their new album Aurora. It’s a collection of their biggest and most popular songs, but with a new song called “Far Away” featuring Scooter Ward of the band Cold.

As always with new events, players will earn over 50 new armors, items, and rare badges, but thanks to the band, there will be no VIP packages during this concert. All the new item rewards for this event comes from defeating the monsters or crafting.

If players want a virtual selfie with the band, they can head to Yulgar’s Inn, where they are hanging out. Players can talk to Ben & learn a little about the band. Players will find the quests to earn the “Far Away” badge & title and the epic, perma-rare, Breaking Benjamin T-shirt.

Previous battle concerts had a single boss monster, but this one has TWO massive Titan Bosses. The players’ actions during the show will determine if one of them becomes the final boss. It will take a little strategy and a lot of teamwork. Each Titan drops different rewards.

In addition to the concert, the concert promoter, Bryce Platinum, has brand new quests for everyone to complete during this show. And if a player was a VIP from a previous show, they can find all of their previous quests on him too!

The Arti Team hopes you enjoy this Breaking Benjamin Battle Concert. And since this event is happening across two of their games, there are slightly different things being focused on. AdventureQuest 3D focuses on the concert itself, while AdventureQuest Worlds is focusing on a unique story surrounding the band.

The team hopes players will have a great time, and that they should be sure to get the perma-rare items from both games before the event ends on March 8th, 2020. So hop on the games, enjoy the shows, and BattleOn!

Blizzard Ships Another Encrypted World Of Warcraft: Shadowlands Alpha Build As They Prepare For Upcoming Expansion