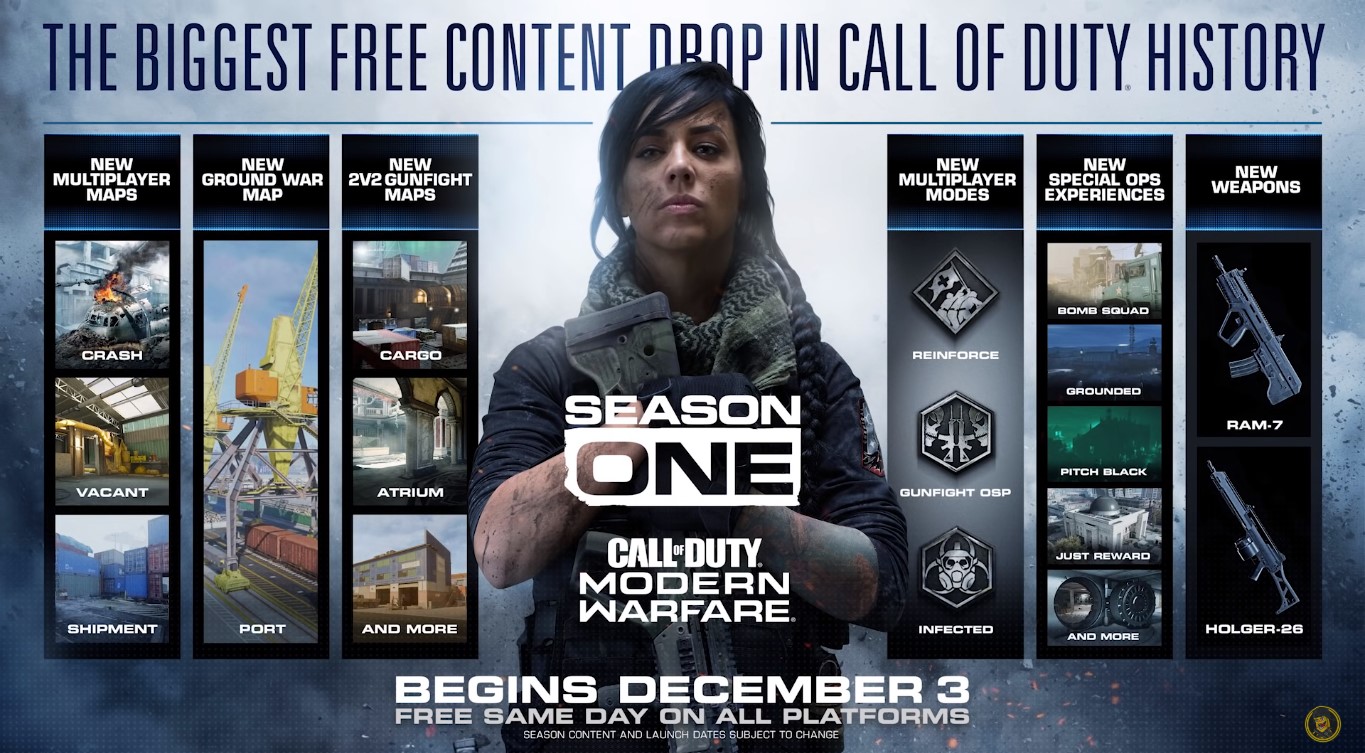 Only a little more than a week is left before season 1 of Call of Duty: Modern Warfare begins. Activision has announced that the Battle Pass will start on Dec. 3, promising new maps and weapons.

As with most Battle Pass, gamers can expect free content for the Call of Duty: Modern Warfare. For instance, two new guns–the Holder-26 and the Ram-7–would be up for grabs. You can also play on a Ground War map and three gunfight maps (2×2). In Ground War, you will fight it out amid shipping crates, buildings, cranes, and wide and narrow streets.

One neat surprise from the developer is three classic multiplayer maps that have been remastered for the game. The three classic maps are Vacant, Crash, and Shipment.

Activision just called it the “biggest” content drop that they are giving away in the game’s history. That is a tall order considering that the first game dropped in October 2003. So, there has been a lot of free content that the developer has released since then.

There are also three modes introduced in the Call of Duty: Modern Warfare Season 1 Battle Pass.

O.S.P. – The On Site Procurement is a gunfight mode where you start the battle with no weapons at all. You would have to find weapons on site to use as you try to kill your opponents.

Reinforce – The developer describes it as a hybrid of S&D and Doom. There are three flags on site. Your mission is to control these, even if you kill everyone to do it.

Infected – A multiplayer mode where the aim is to survive. You can be the hunter or the prey–the last man standing wins.

The developer also promises to release more game modes, maps, and weapons as season 1 rolls along.

Meanwhile, you can earn player experiences in the Battle Pass:

Pitch Black – You need to infiltrate the former estate of Barkov and get all the intelligence information inside before leaving the property on the tactical rover. You do this without being spotted.

Bomb Squad – You have to find and defuse the bombs planted all around Al-Raab.

Just Reward – Instead of guns, your weapon is your computer. Your mission is to hack into the financial system of the terrorist organization. You need to get inside their data center without being caught.

Grounded – If you like combat, you would feel at home on this mission. You need to free the former airbase owned by Barkov. You may need to kill a few enemies.

Call of Duty: Modern Warfare is available on Xbox One, PlayStation 4, and Microsoft Windows.