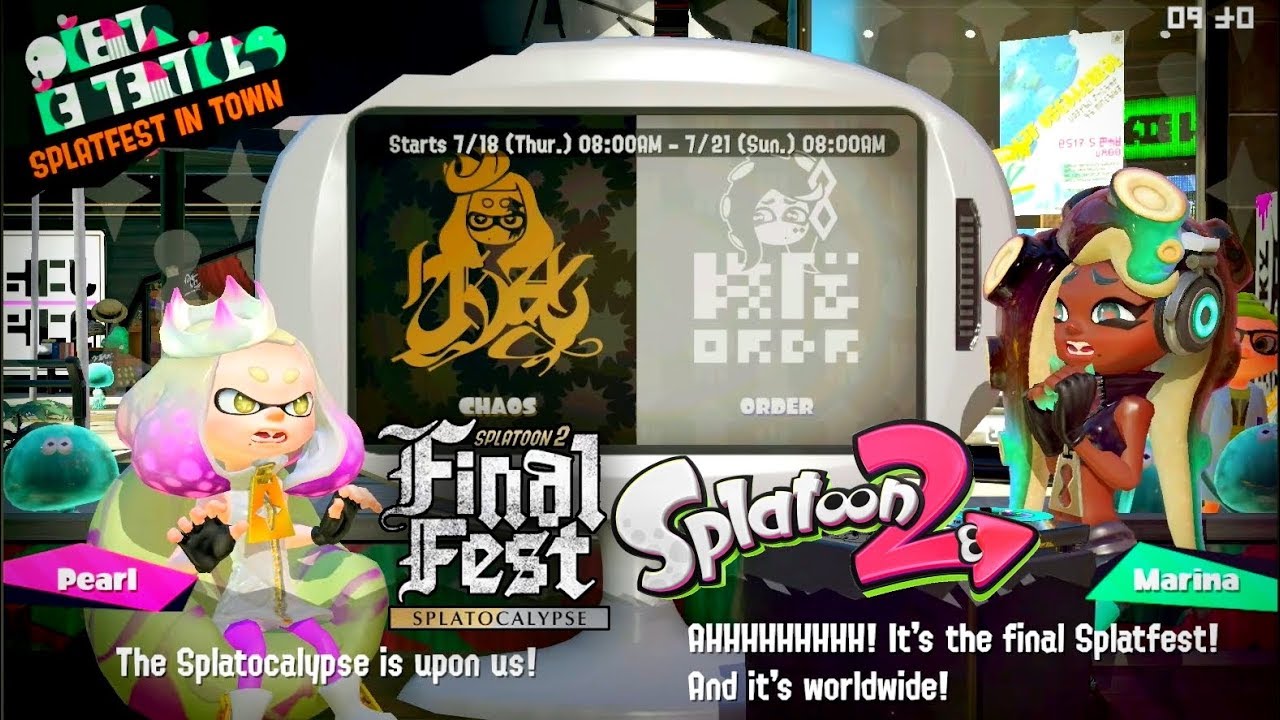 It’s finally upon us, the last Splatfest. It’s been a long road, and a long list of competitions: Cake Vs. Ice Cream, Action Vs. Comedy, Time Travel Vs. Teleportation, and much more.

And despite the salt (the copious, copious amounts of salt), if there’s one thing the Splatoon fandom can unite under, it’s the joy of Splatfest. A bit of background: Splatoon 2 is the sequel to Nintendo Wii U hit, Splatoon, where players take on the role of a kid-squid called an Inkling, and using an array of bizarre weapons like buckets, brushes, and water guns, literally paint the town in the color of their team. The team with the most turf colored in this surprisingly brutal, but visually explosive game wins the Turf War. It sounds simple, but with tons of weapons with unique loadouts and applications, gear with special abilities, and new specials than can be reasonably kept track of, there are innumerable layers of gameplay.

Splatoon 2 upped the ante with an all-new story mode, new weapons and weapon types, new gear, and all-new stages and modes, including the dark and lore-Heavy Octo Expansion, which allowed players to becoming the Inkling’s rivals, the Octoling, upon completion. The inventive, team-focused gameplay, excellent visuals, expressive and catchy tracks, and plethora of opportunity for different styles of play quickly won the hearts of many, becoming one of Nintendo’s most popular games, with Inkling even getting an inclusion in Super Smash Bros. Ultimate. But the thing every player, casual or hardcore, looks forward to, is the Splatfest, a nighttime competition where players choose a side to fight for, to gain skills, bragging rights, and the coveted Super Snails to upgrade their gear. While tensions can occasionally get extremely high between teams, overall, they’re one of the biggest draws of the game.

And now we’re at the last one, and it’s bigger, better, and more incredible than all the others combined: Chaos Vs. Order.

Unlike the other Splatfests, which varied by region, this one is worldwide, and lasting 72 hours. Even more incredible is the inclusion of free headgear for players, regardless of which team they picked. It really seems like Nintendo’s pulling out all the stops for this one, but it gets better.

Even though official Splatfests will be over and done with after the Splatocalypse, players will be met with a great surprise for the next update; the ability to make your own Splatfests! Players can choose from the 51 ink colors of the previous Splatfests, along with day/night for the stages, as well as the included Shifty Stations. Players will essentially be able to create their own Splatfests, ensuring that Splatoon will stick to their mission statement of staying fresh.

It seems like only yesterday when Splatoon 2’s first Splatfest dropped, and here we are in the last one. Splatoon 1’s final Splatfest had a direct impact on the story for Splatoon 2; if a Splatoon 3 is in the works, this one could have even greater stakes, but only time will tell. Until next time, stay and play savvy, gamers.