The Overwatch League has announced the upcoming Summer Showdown; their take on cutting what was once long tournaments that would span for months into bite-size monthly tournaments where hero pools are a lot more managed, storylines are clearer for viewers, and there is thankfully a bit of a lull between matches to help avoid the burnouts that other esports are experiencing in droves.

The Summer Showdown is following in the steps of the successful May Melee tournament starting this Saturday, June 13.

All teams within the Overwatch League are participating in the Summer Showdown with points determining the seeding for teams within the regional tournaments that range from July 3 to July 5 for the North America bracket, and July 4 to July 5 for the Asia bracket. The two separate divisions are used to mitigate latency between teams as LAN matches are unfortunately still not plausible due to COVID-19.

The new removal of hero pools within Overwatch will affect the latter half of the tournament, however, teams will all start the Showdown within a constrained hero pool that will be removed after the first two weeks of the showdown have transpired (and before the tournament kicks off). The hero bans have already been announced as well: both Echo and Sombra are removed for DPS, D.Va for tank, and Brigitte for support.

The Summer Showdown begins on June 13 that is effectively qualifiers for the seeding for the tournament.

In the Asia bracket, however, all teams automatically qualify for the tournament, as there are only seven teams within that region.

As the Overwatch League is wont to do, the matches will shake up your sleep cycles for a bit longer than you’d like, at least as far as the weekend goes. Blizzard pushed out an official graphic that shows the schedule that every team is beholden to for the duration of the Summer Showdown, but be cognizant: shift happens. 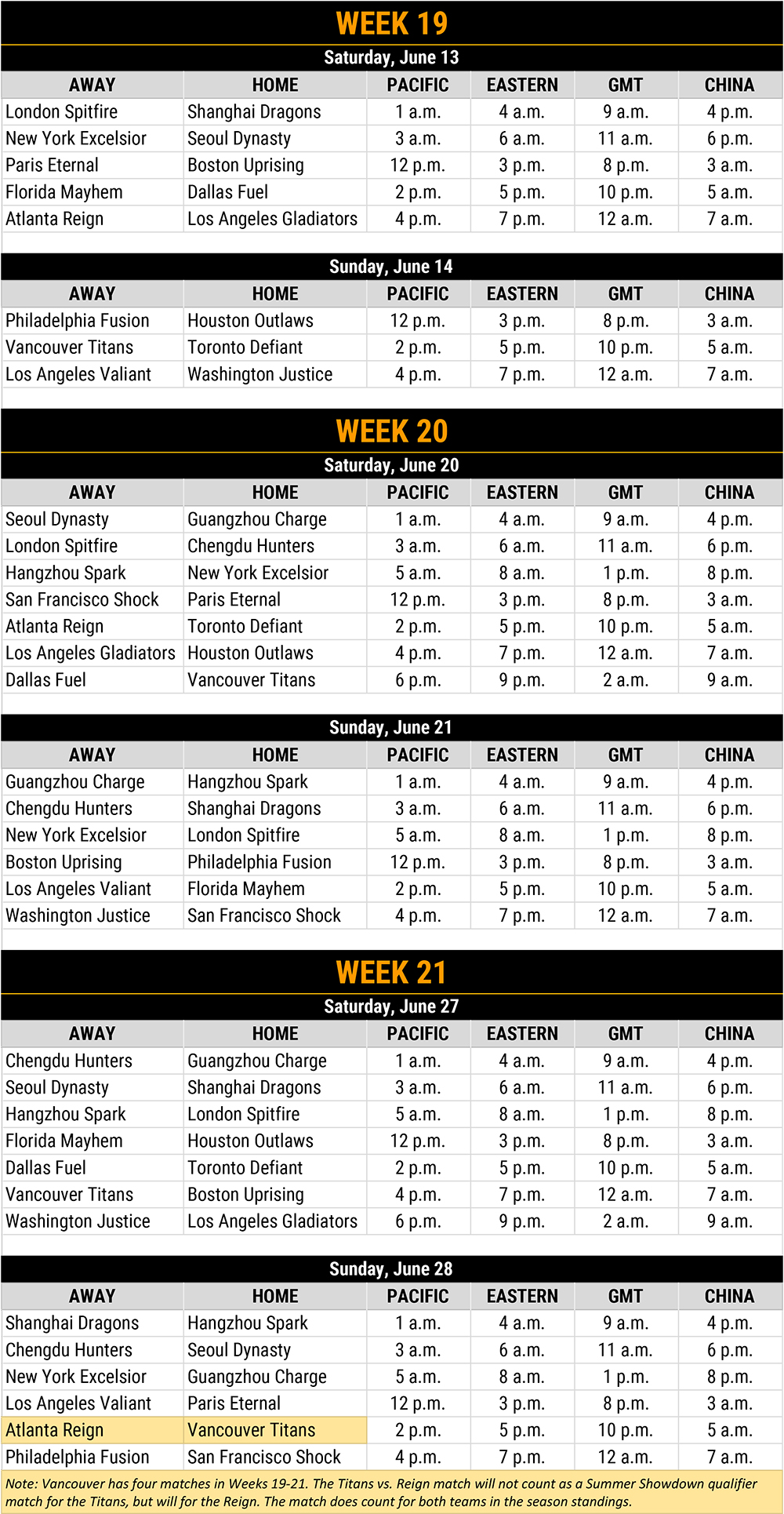 All matches can be viewed exclusively on the YouTube Gaming Live platform. The prize pool totals at $275,000, with champions of each bracket receiving the majority of $50,000 and the remainder piecemeal to runner-ups.

Blizzard has also announced their next upcoming tournament following Summer Showdown will be held in August with a similar format, again splitting North America and Asia into two separate brackets.

A question that looms in the horizon is whether or not these bi-monthly formats will continue, even after the threat and presence of COVID-19 die down. Overwatch League has noted a large uptick in popularity for the May Melee, and are likely hoping that this format wasn’t a one-off in terms of viewership.