Foxy Fox and his girlfriend Jennie were enjoying their romantic day together, when suddenly, a giant, menacing eagle swooped down and snatched her.

Foxy chases the eagle, but it got away with his sweet Jennie. It’s up to gamers to save Jennie and restore their love story! This is a brightly animated adventure-platformer that initially came out on mobile, but it’s now releasing on all platforms.

Check out the gameplay trailer:

Players will navigate through levels, weary of enemies, and seeking out gems and cherries. Foxy has three heart points, and if they run it, Jennie is doomed.

Jump over spikes, crush demented frogs, and watch out for deadly demonic stone stompers. Foxy wants to look good while he’s rescuing his lady, so the cherries he collects in a level can be used to purchase new accessories.

Speaking of levels, there are 36 throughout FoxyLand, and they get more challenging the closer Foxy gets to his beloved Jennie. The island is full of diverse topography, like green forested areas, caverns, and gothic areas.

This game is a lot like other platformers in terms of gameplay and level construction. The easier parts of a level consist of flat ground and minimal enemies, only requiring a bit of jumping. Then it gets a lot more extreme. Levels can quickly turn into a high-risk high-reward scenario, featuring tiny platforms with spikes on either side of it and projectiles shooting out of skulls.

No platformer is complete without a soundtrack, and FoxyLand has a bumping chiptune beat that Foxy will pulverize enemies too.

The storyline is quite tropey. The game starts with an eagle grabbing Jennie and flying away, with Foxy lagging behind. This is one of the most used starting points in a 2D platformer game, just substitute the foxes and eagle for something else.

However, FoxyLand is more about the gameplay, not the plot. Also, it’s only a single-player game, probably to prevent a fox love triangle.

There isn’t anything truly unique about this game, but it’s different enough for platformer gamers to give it a chance, especially with its low price point. It’s a super cheap digital download, four to five dollars, depending on what platform a gamer buys it on.

It’s scheduled to come out either today or tomorrow, depending on the platform: Xbox One, Nintendo Switch, PS4, and PS VITA. For Nintendo Switch players, this game can be played using Tabletop mode, Handheld mode, and TV mode. It’s also available on Android and PC via Steam right now!

If gamers are looking for a challenging, but light-hearted platformer, FoxyLand checks those boxes. Try it out and be the hero that Jennie needs! 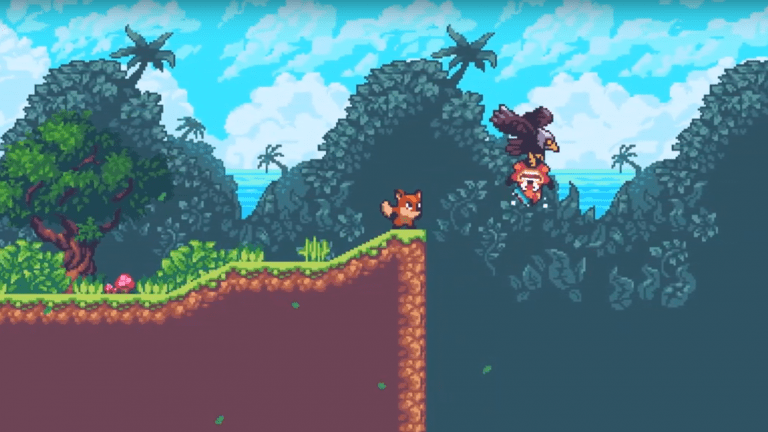 Nov 27, 2019 Stephen McCaugherty 4490
Foxy Fox and his girlfriend Jennie were enjoying their romantic day together, when suddenly, a giant, menacing eagle swooped down and snatched...