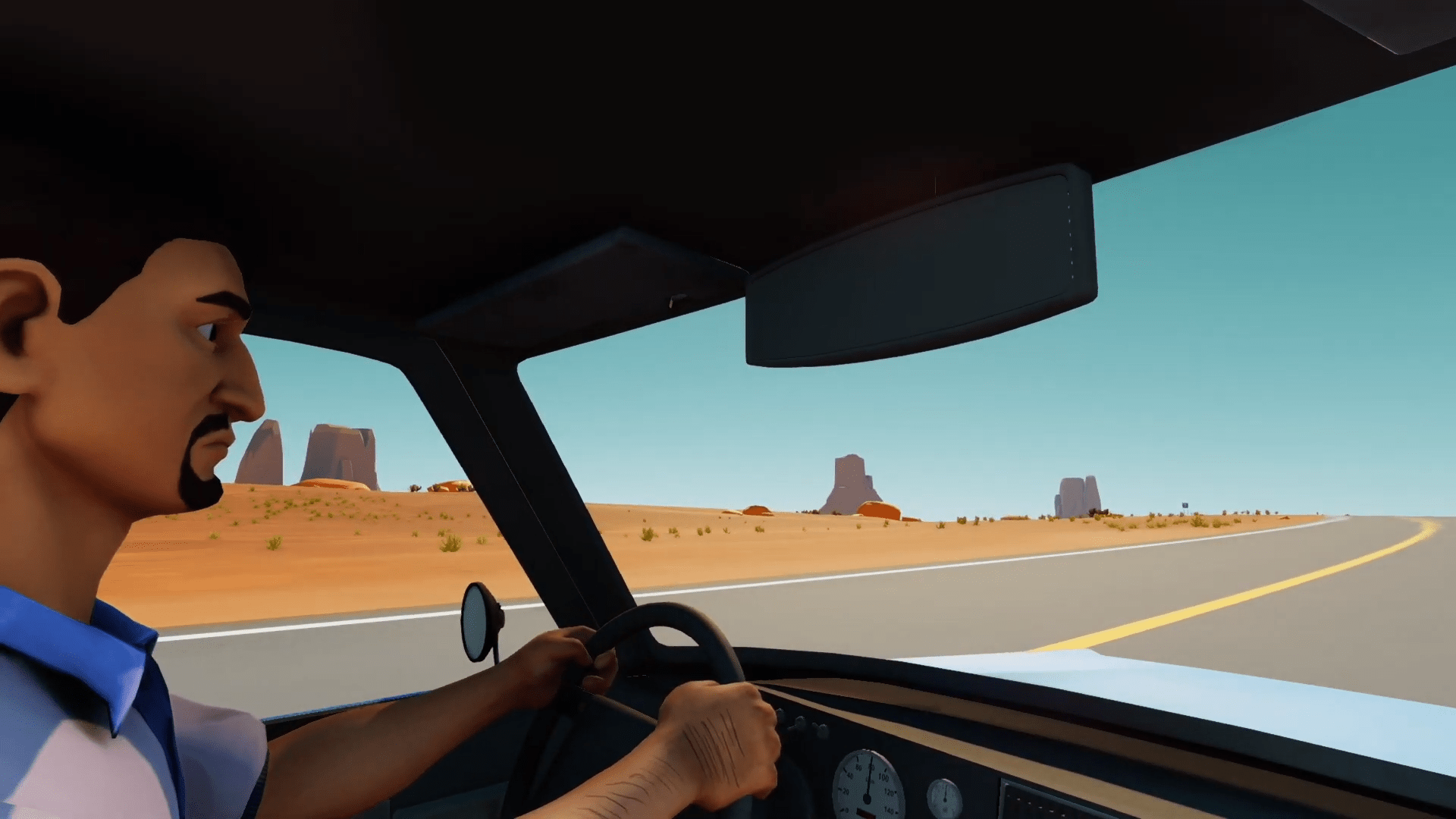 Sometimes a title gives away all of the good bits, what else can be said.  ‘Hitchhiker – A Mystery Game’ has been revealed at EGX Berlin ’19, and it looks to be quite the dramatic game, with tension dialogue taking a front seat to action, and platforming.  With a beautiful art-style, Hitchhiker’s main goal is figuring out exactly who you are, and what your past details.

The developer Mad About Pandas wants players to solve this via dialogue with the various drivers that are willing to give a stranded middle-of-nowhere hitchhiker a ride across a vast desert.  Beautiful scenery passes as dialogue options are presented to the player as they travel in tandem across what appears to be the central United States, replete with amber fields of grain, windmills, and the occasional farmhouse or six.

As the player imitates high-schoolers by solving the mystery of who they are, they also seek out someone that the developers are being rather hush-hush about.  Add on top of some rich backstories from the various drivers that each have their own unique story to tell, and Hitchhikers may very well be a sleeper hit if the dialogue is nearly as good as the trailer proposes for those seeking more of a guided story with less action.

The cell-shaded simplistic style works well for the focus on dialogue, although one could be forgiven for wanting to explore more than what’s behind yet another engine.  Players are also scheduled to solve environmental puzzles as they continue to explore the world of lost highways and sprawling fields.

Despite the idea that players will continue to find themselves trapped in vehicles, the landscape pleasantly breaks the monotony with sunrises and sunsets, animals traveling, and various points of interest.

The plucky banjo-led soundtrack does well against the grain of philosophical questions of discerning reality from fiction as voices in your head argue with themselves and warn you of impending doom.

The true forefront of the game is the dialogue, where players truly experience the world next to whichever driver chose to give them a lift, of which the game offers five.  The austere attitude of some drivers works well with the player’s general confusion, and the writing seems top notch in what they’ve previewed thus far.  Various touches, such as commenting on what you’re doing inside of the vehicle, add to a foreboding sense of immersion as you try to figure out precisely what is happening.

From the little bits of their hand that the developers have chosen to show the world, Hitchhiker seems to be close to Firewatch, in tension and dialogue focused gameplay.  Player’s can question their own sanity sometime in 2019.