Behold Studios’ Chroma Squad first debuted over five years ago but continues to surprise gamers. The game was launched on mobile, then later on PC, PlayStation 4, Xbox One, and the Nintendo Switch.

Super Rare Games has now announced it will launch a limited physical edition for Nintendo Switch. Only 4,000 versions of the game will be printed worldwide. Not only will players get a physical release of the game, but some additional content.

The publishing will be handled by Plug in Digital. The physical release includes all previously released digital content on a cart, full-color manual, interior artwork, exclusive sticker, and three randomly selected trading cards from a five-card set.

Chroma Squad is a tactical RPG about five stunt actors who decide to quit their jobs and start their own show. The game itself takes inspiration from Power Rangers, Super Sentai, and the tokusatsu media genre.

Players are tasked with creating the show. This includes casting actors, upgrading their studio with new equipment, crafting weapons, and creating giant mecha with whatever supplies are around them. Once the show begins filming, players control each actor in turn-based battles. Since the show focuses on teamwork, players will get to pull off dramatic maneuvers with all five members.

The similarities to the Power Rangers franchise is very obvious. After some disputes with Saban, the developer added “Inspired by Saban’s Power Rangers” to the packaging and in-game menu. The developers have previously commented that Chroma Squad is a love-letter to the tokusatsu shows they grew up with.

Chroma Squad was brought to life thanks to a successful Kickstarter campaign. The game had almost 4,000 backers and raised almost $100,000. It was marked as a Kickstarter “campaign we love.”

Pre-orders for the physical edition of Chroma Squad launches today at 6 PM BST/ 10 AM PT / 1 PM ET through Super Rare Games for a very limited time.

Life-Sized Statue Of Atelier Ryza's Heroine Ready For Pre-Order But Costs Over $20,000

CS:GO - Astralis Announce Their Cologne Roster And It Doesn't Include Gla1ve 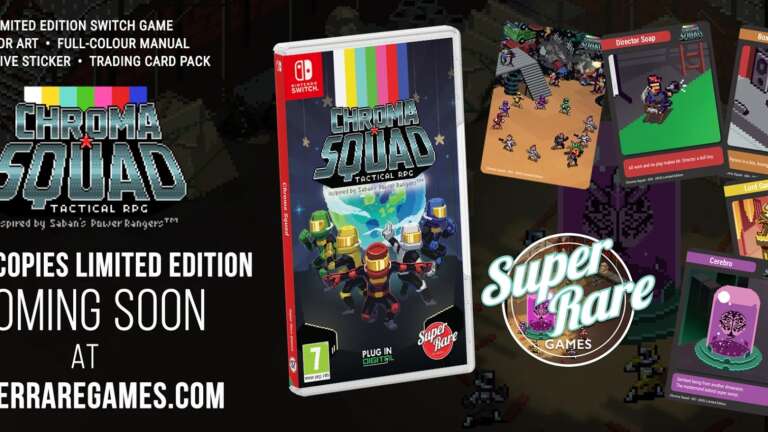 Aug 13, 2020 Lisa Nguyen 7690
Behold Studios' Chroma Squad first debuted over five years ago but continues to surprise gamers. The game was launched on mobile, then later on PC,...