Many Minecraft Players enjoy going to Minecon, not only to see other players but also to see the current roadmap for Minecraft. A Mojang Studios employee, LadyAgnes, stated that Mojang Studios would be having its own broadcasted event later this year.

LadyAgnes is a Mojang Studios Lead Developer and has tweeted about the upcoming broadcast promising that while currently, very little information is available. More information will be available next month.

This club was created by a collaboration between the Elsewhere club and Open Pitt that is an engineering group that specializes in virtual events and Heav3n, which is a roving L.Q.B.T.Q party.

Another recreation that has been gaining some famous is the Chernobyl Zone that is slowly being recreated by Janisko and friends. Janikso said this about his creation, “The map will be made for playing survival, so there will be no things like hollow buildings. on the contrary, I am preparing a very sophisticated project, which will primarily imitate the real Chernobyl Zone, and there will be somehow built maps from the game series S.T.A.L.K.E.R.”

The reason why Minecon isn’t going to be in its normal format is due to the COVID-19 pandemic, which has caused many live events to either be postponed or changed into a virtual event. 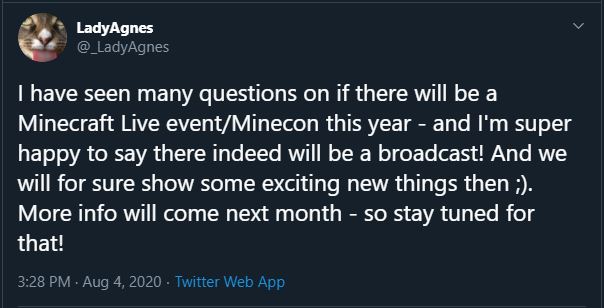 During this event, players will most likely hear about upcoming updates and the overall roadmap for Minecraft. The tweet that LadyAgnes sent out gave little information but did let us know that “some exciting new things,” which implies some fantastic new development / new information.

At this event, Minecraft users may be able to hear more information regarding upcoming Minecraft Dungeons DLC, community events.

How this event is broadcasted has not been announced, whether it will be something that Minecraft players can roam in as their Minecraft avatar or just a video live stream that anyone is able to view and tune in.

As of right now, we are still waiting for more information that can come in the form of either another tweet or an official announcement.