Good Smile Company has revealed its design for Nendoroid 2B from NieR: Automata. The Nendoroid is a petite version of the character and will come with several accessories, including options with and without the blindfold.

The 2B Nendoroid is a part of an official collaboration between Square Enix and Good Smile Company. The official website to preorder the toy is now available with additional images and information about the product.

Automated YoRHa infantry member, the all-purpose battle android “YoRHa No.2 Type B (2B),” will come with two faceplates. One is for her standard expression along with a series of combat face. Her blindfold is removable since it snaps into place. Buyers will need to remove her bangs first, place the blindfold into place or remove it, and then reaffix the bangs to use the accessory.

The 2B Nendoroid will ship with her weapons Virtuous Contract and Virtuous Treaty. Both will have attachable effect parts to replicate attack moves. In addition, the support unit Pod 042 will come with a stand to “hover” beside 2B. A Black Box accessory will also come with 2B, which is an additional hand accessory.

The figure will come with multiple parts so fans can recreate a variety of scenes. They include the main figure, along with multiple shoulders, arm, hand, and leg parts. Good Smile has included these for fans to recreate some of 2B’s dynamic moves without her clothing getting in the way.

SQUARE ENIX presents Nendoroid NieR:Automata 2B (YoRHa No.2 Type B)! She comes with two face plates and several optional parts! Be sure to add her to your collection!

Nendoroid 2B can’t stand by herself because of the weight of her head. Every Nendoroid is shipped with a clear plastic base with a stand that is inserted into the character’s back. This will help the character pull off several dynamic poses without the figure falling over.

Anyone interested in preordering the figure can do so now either through the official Good Smile Company Online shop or any other authorized retailer. This will ensure that fans will receive the popular character, which may sell out quickly after its release. Good Smile does re-release some of its most popular characters, but it’s not guaranteed.

There is currently no information on if Good Smile plans on releasing any other characters from NieR: Automata into Nendoroid form.

The NieR: Automata 2B Nendoroid is now available for preorder until October 29.

Minecraft Mobs Explored: Mooshroom, A Cow That Features Mushrooms On It's Back But Still Has Milk To Give

Oct 25, 2020 Lisa Nguyen 1050
Square Enix has revealed a stunning new statue featuring NieR: Automata's 2B, 9S, and A2 to celebrate the franchise's 10th anniversary. The statue is... 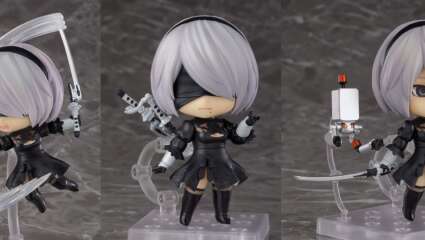 Oct 16, 2020 Lisa Nguyen 3240
Good Smile Company has revealed its design for Nendoroid 2B from NieR: Automata. The Nendoroid is a petite version of the character and will come...

Oct 15, 2020 Lisa Nguyen 940
Square Enix has confirmed the mobile game NieR Recarnation will launch in North America and Europe. The announcement was made during the NieR 10th...