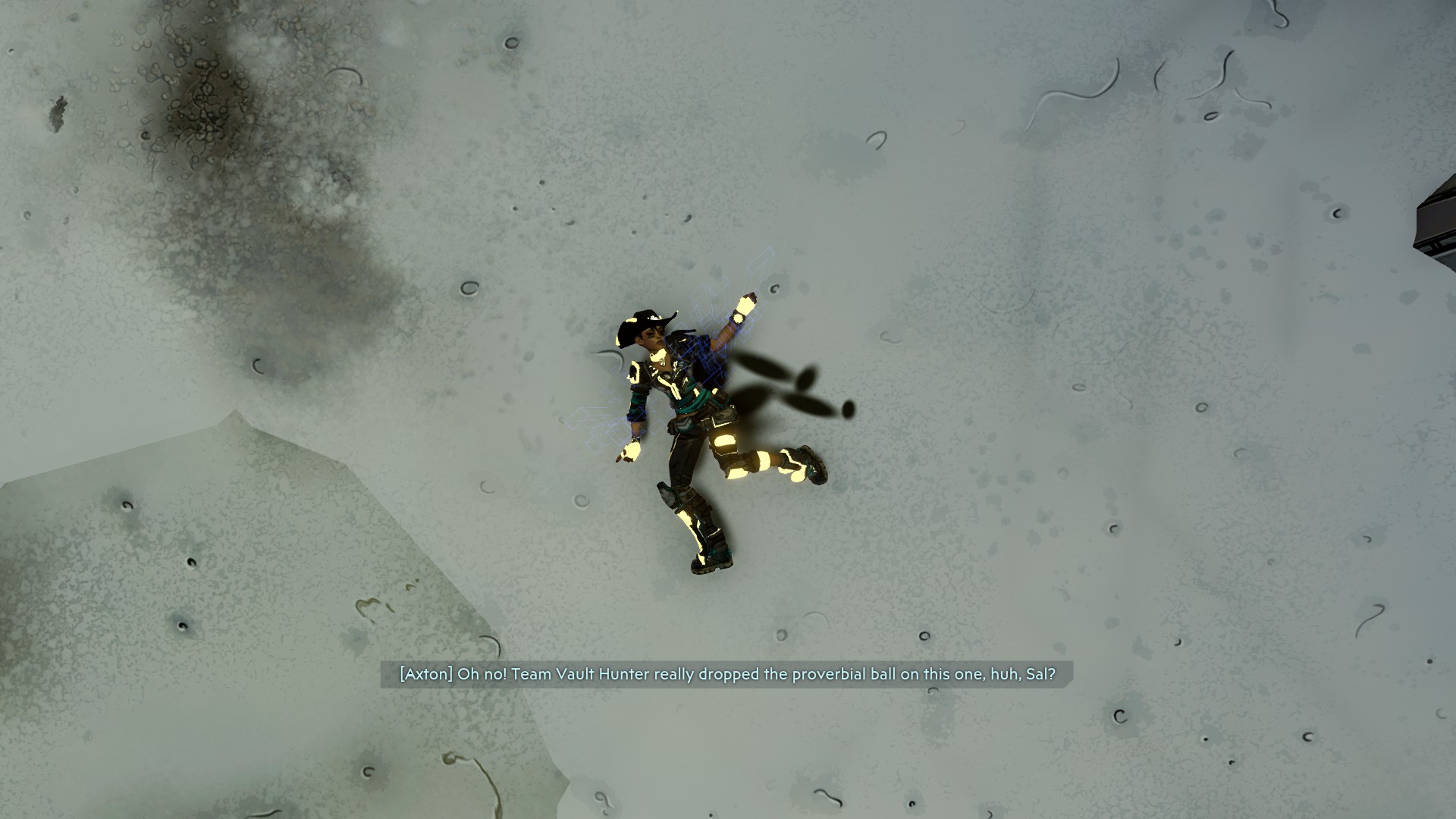 Borderlands 3 arguably has some of the best gunplay of the franchise thus far; weapons are crisp and unique, drops are heavily varied, and there is a decent variety of enemies to cut down into pieces.

This isn’t to mean that it’s flawless; the four heroes that make up the playable roster (that have yet to be added to) aren’t as exciting as other titles (even Borderlands: The Pre-Sequel, had more interesting and dynamic abilities).

The primary annoyance, however, is that Gearbox appears to be unwilling to get out of their own way; you’ll be forced to stand idly across every play-through as characters wax poetic with exhausting diatribes and monologues that hedge on exhausting in the first playthrough, and will have users wildly annoyed by the second. 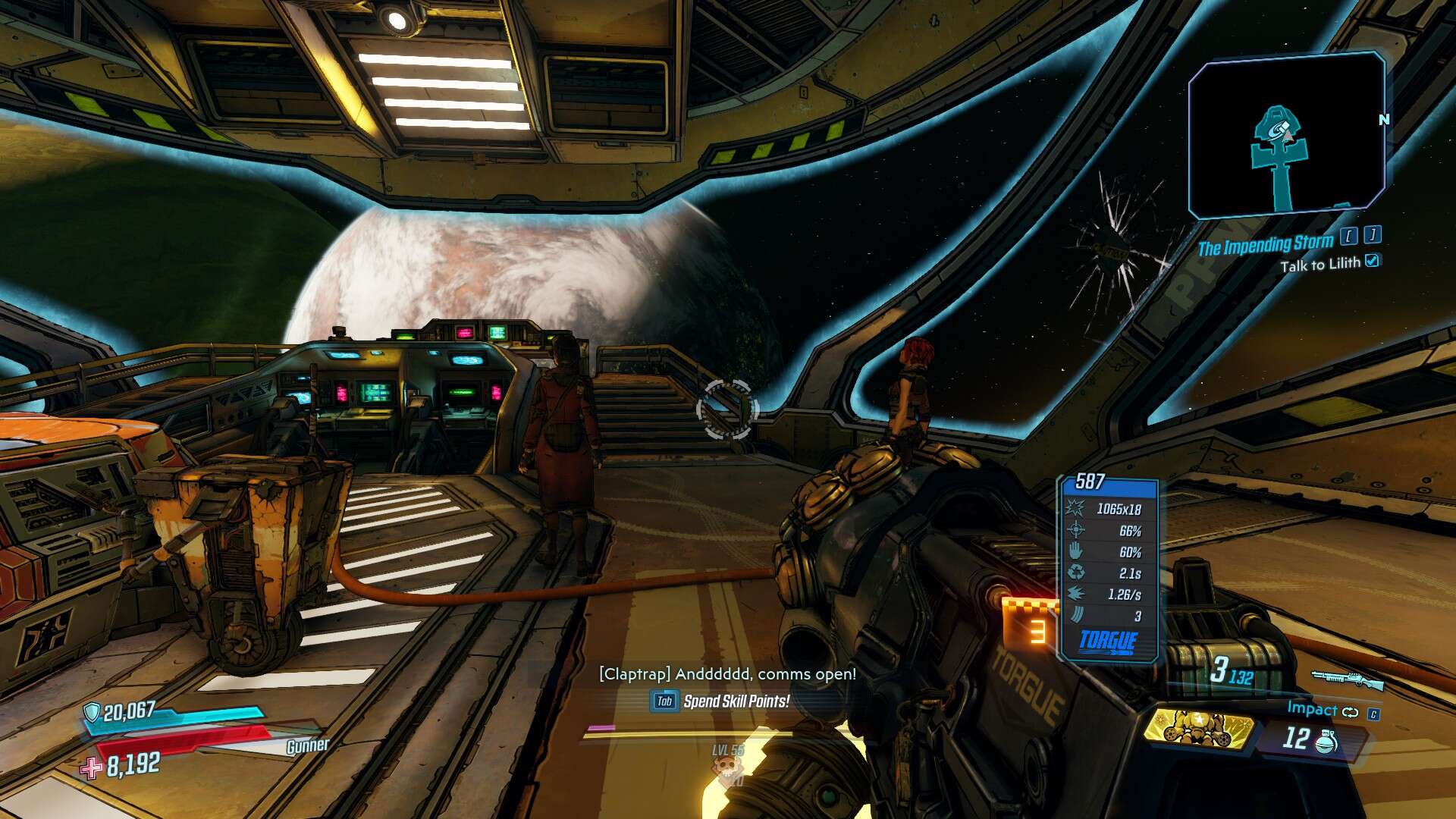 Considering that Borderlands tends to lean on replayability with multiple difficulty levels increasing the stakes (and loot) with every run, the fact that you’ll need to sit on your hands while you wait for dialogue #314 before the objectives update and you can get back to murdering your way across the galaxy is infuriating.

Even if the plot mirrored Tolstoy’s own works in terms of depth and arcs, you’d be hard-pressed to find someone that wanted to re-read the same novel for an entire month.

Obviously, Borderlands 3 doesn’t match the legendary writers of the past; the antagonists have interesting dystopic identities that are, at times, overplayed while managing to fit well into the bizarre Borderlands universe, and the playable Vault Hunters are shallow enough to make Ubisoft boast their open-world titles as being profoundly deep.

The newest season pass for Borderlands 3, being the second season of DLC and content, has made a few waves across Borderlands fans in a negative way, much as we saw from ARK: Survival Evolved. Users expect the purchase of a first season pass to consequently offer every piece of content that comes after launch; when the second season of content is offered that users don’t receive (without an additional purchase) users become extremely frustrated.

Thus, the Borderlands 3 Season Pass 2 has experienced a bit of derision from the very audience they are looking to entertain; the negative reviews alone shouldn’t stop you, however, from embracing the additional content that Gearbox is offering.

Especially as Gearbox looks like they’re finally understanding that fans are playing the franchise for the gunplay and loot-shooting, instead of exhaustive dialogue that has players standing still and browsing Reddit on their phones while the NPCs get everything out of their system for the chance to ‘further the plot’ that takes a ready backseat to sniper rifles that launch minefields and pistols that never run out of ammunition.

The second season pass offers a bit of content across a wide variety of mediums, although at the moment only the ‘Designer’s Cut’ is available as the first half of the pass which offers a new tree to each of the playable characters along with a rogue-like challenge called Arms Race.

The new trees won’t change playstyles too drastically; if you found the characters wanting before, you’ll find the sentiment echoed here.

Moze’s Iron Bear can be specced into an autonomous drone that fights through enemies with you, Zane gets a shoulder-mounted rail-gun, Amara has a controllable orb of elemental damage, and FL4K gets a gravity snare that masses everyone in an area of effect into a singular point for a bloody harvest.

Arms Race, however, adds a bit of pizazz that won’t force you to wait around every fifteen minutes for dialogue; drop into an arena with nothing in your inventory (not even a shield) and scavenge for weapons as you murder your way around an arena staying within the boundaries of a ‘Murdercane’ as the Borderlands content readily offers a bit of parody from PlayerUnknown’s Battlegrounds (presented as ParticipateIdentified). 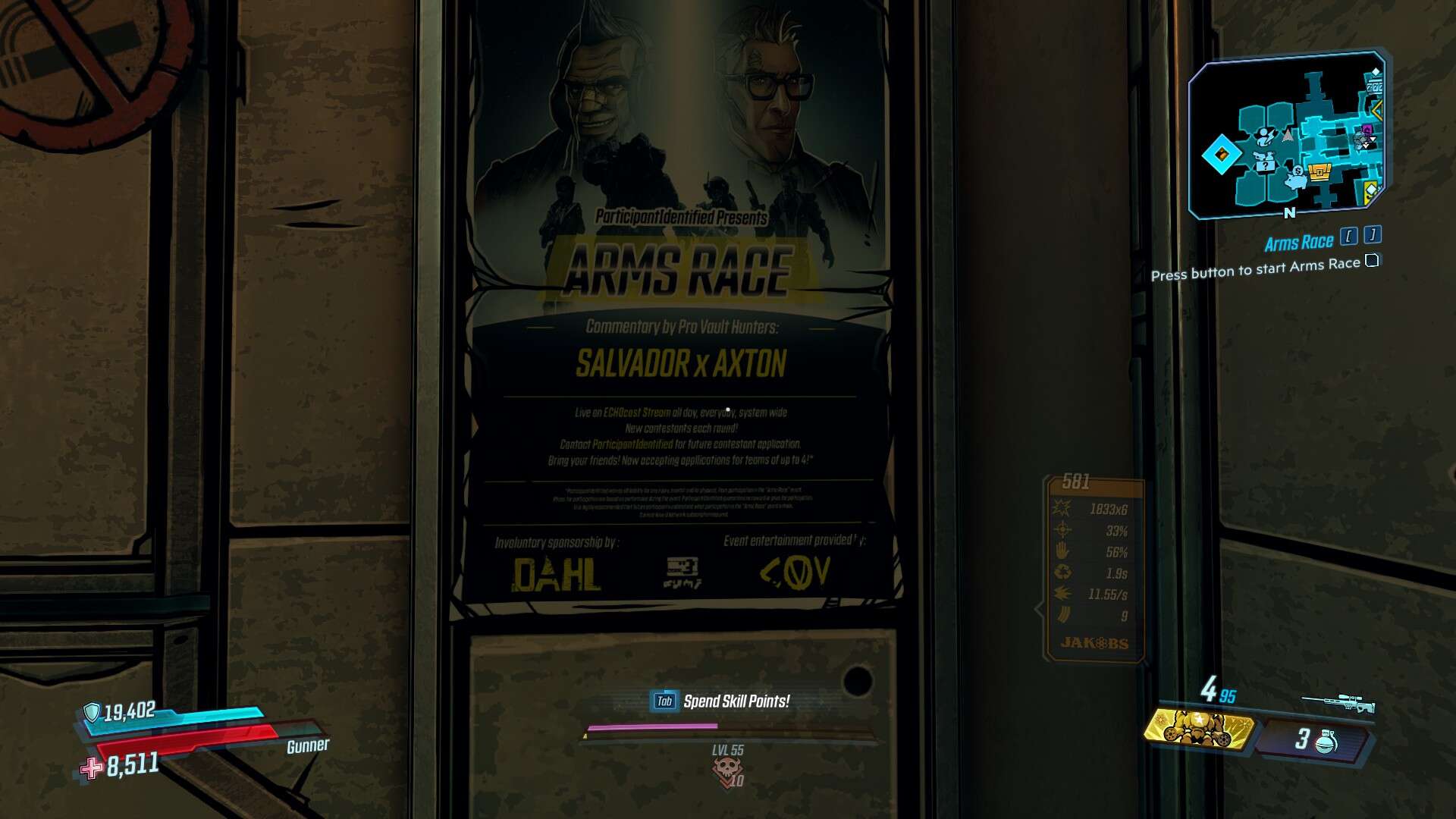 It can be difficult; finding a weapon to start with means that you’re ducking and dodging hails of bullets while frantically trying to find a weapon, but it opens up fantastically once you do as you’re forced to use weapons that you would otherwise gloss over, simply as a means to do damage in a clutch scenario. 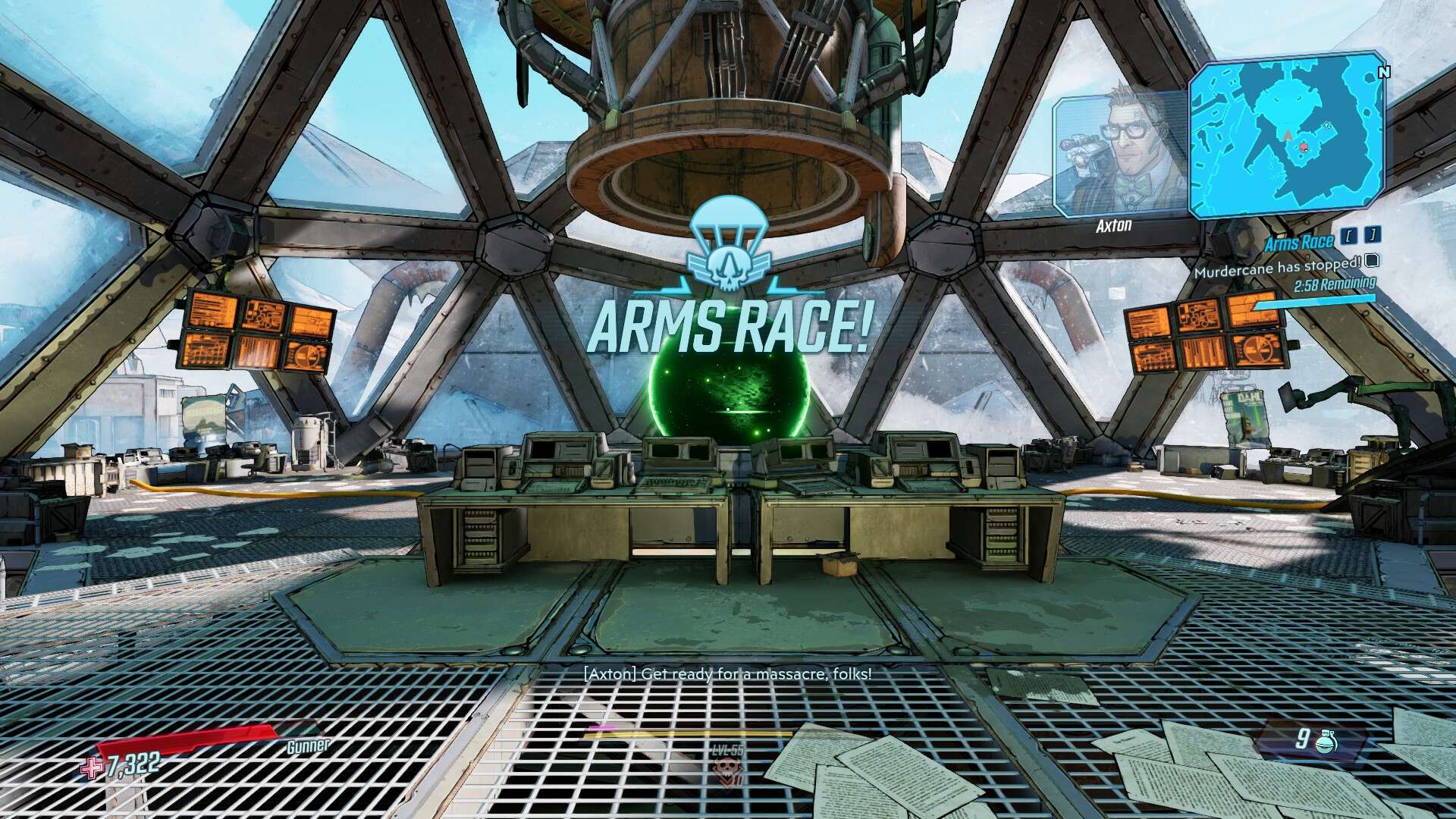 The battle-royale begins when players jump into the portal, offering fast action. Is that Axton wearing a bow-tie? Will we soon have a 30-minute unskippable dialogue explaining why he is now wearing bow-ties? – Borderlands 3 via Gearbox Software

Soon you’re sprinting around while clearing areas with a smorgasbord of weapons, and Borderlands 3 finally shows what it can be; a world of mayhem and weapons where players are given all of the tools necessary, without running in circles and opening up the cumbersome map every three minutes to figure out where they’re supposed to go to the soundtrack of some NPC spewing an endless narrative.

Stumbling across legendaries is the name of the game if they changed the name of the game from Borderlands 3 to Stumbling Across Legendaries; as you progress through the Arms Race, you’ll eventually start finding legendaries that will need to be uploaded to the ship in order to use them. Finding an upload kiosk in the midst of frantic battles while managing the storm to save the legendaries found becomes a fantastic mechanic that will result in more than a few deaths, but managing to complete the run can result in legendaries that drop into your vault at the same level of your character. 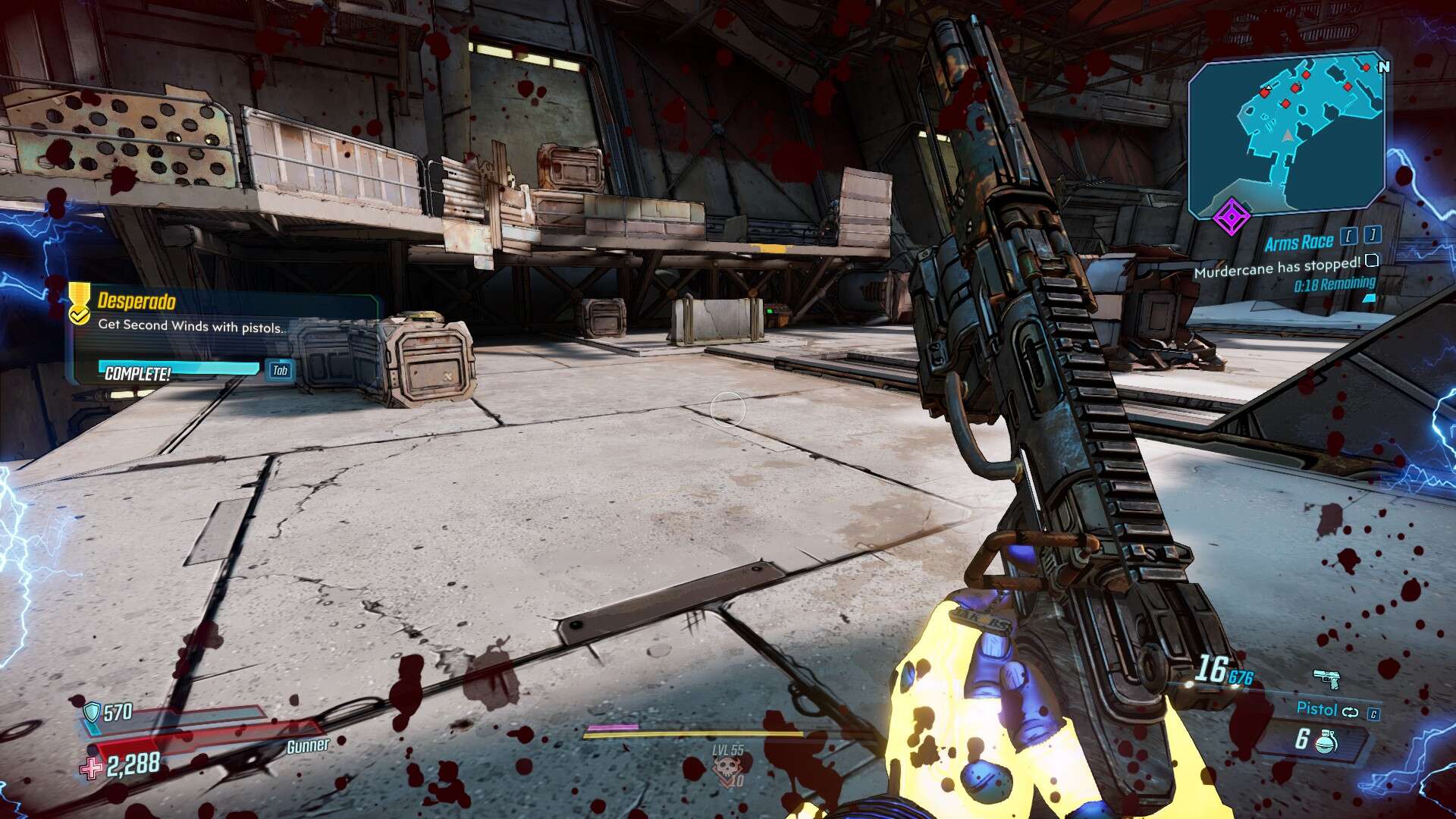 Almost constant action turns into the best nightmare fuel as you find yourself desperate for even white weapons to help shut down enemies while searching for legendaries in a race against time. It’s Borderlands 3 at its best. -Borderlands 3 via Gearbox Software

Some have noted that Arms Race is too difficult to complete as a single player, but I didn’t find this accurate: in five runs, I successfully completed three by myself, and the first two were simply trying to understand the mechanics of the content. Don’t step in expecting a victory to be handed to you, but it’s far from ‘unfair’ in my experience.

Included with this is Mayhem 11; a mechanic that some have been requesting, and others find neuters the entire point of Mayhem. The newly included Mayhem 11 allows you to notch Mayhem up by a level and remove all of the modifiers: no more pools of fire when you stop moving, no increasing crit damage, or any other active effects, but the weapons still result in Mayhem level 10 drops; the highest level modifier possible.

Playing in Mayhem 11 versus Mayhem 10 felt…boring, frankly, as it shuffled absolutely nothing in exchange for higher stats, with a 50% drop rate nerf being applied. For users that were struggling to juggle the various Mayhem effects, it could be a saving grace, but for those that like it fast and frantic, it feels underwhelming. With this, the aforementioned drop rate nerf feels delicious; players that like a bit slower gameplay can still retrieve Mayhem 10 weapons, and those that can thrive under pressure don’t have anything taken from them.

As it stands, the second season pass for Borderlands 3 is a far better value than the first, if you’re a fan of action, even at the current price point of $30. Arms Race alone sells for $15 as standalone content.

The Borderlands 3 Season Pass 2 isn’t completed yet; a ‘Director’s Cut’ (versus the current ‘Designer’s Cut’) is slated to round out the second piece of the second season, and it is scheduled to arrive in Spring of 2021. Here’s hoping it’s less talking and standing around, with a hell of a lot more action.