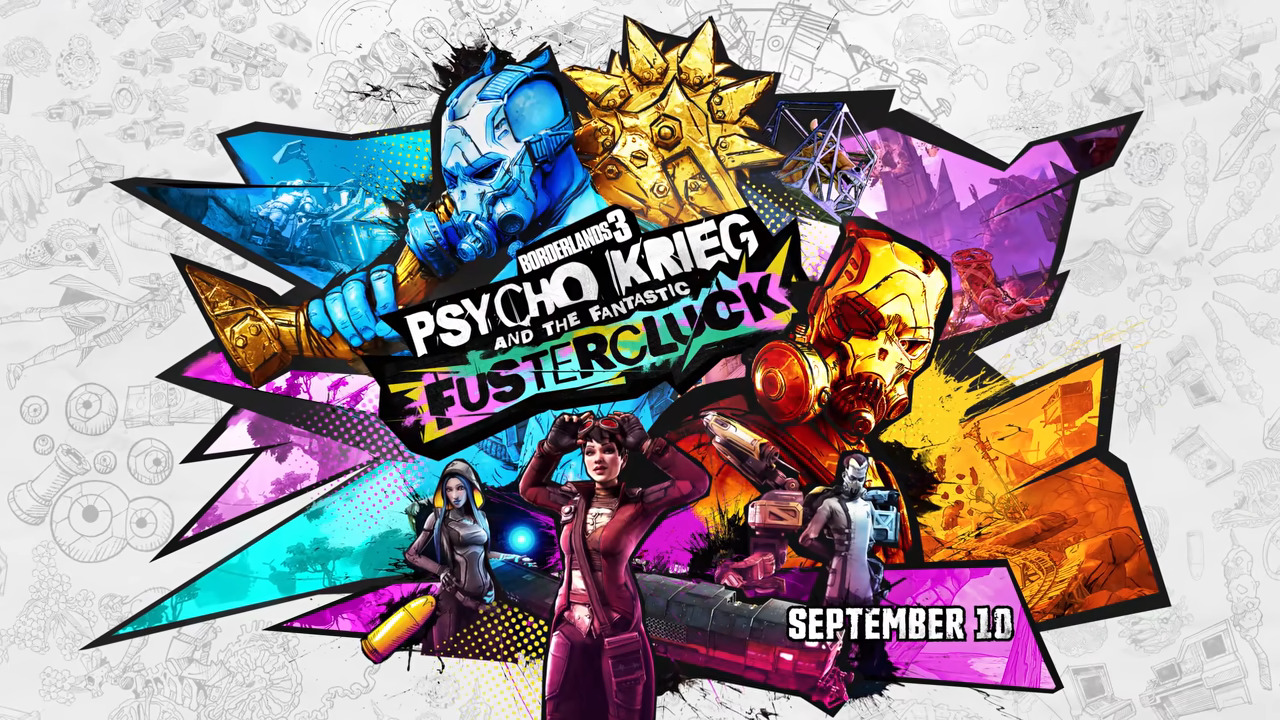 The brand new Borderlands 3 DLC, Psycho Krieg and the Fantastic Fustercluck, is out today. It’s the fourth installment of DLC and should go live later today (around 8 pm BST).

Psycho Krieg and the Fantastic Fustercluck is available across PC, PlayStation, and Xbox, and the new gameplay and story ventures into the minds of one of Borderland’s most beloved characters – the Psychos.

Ready to say goodbye to sanity, Vault Hunter? Psycho Krieg and the Fantastic Fustercluck, the 4th campaign DLC for #Borderlands3, will send you on a savage and surreal journey into madness starting September 10!

Framed by the devs as:

Brilliant scientist Patricia Tannis may have cracked one of the galaxy’s greatest mysteries: what makes the Borderlands’ psychos so uniformly deranged?

The player will literally enter into the mind of a Psycho, a character called Krieg, to discover the secrets of Vaulthalla – a place Tannis believes is the root cause of the Psycho’s insanity.

Krieg, however, is mental. Completely mental. The DLC narrative follows the footsteps of this character and the raging inner voice, slipping between calm and cognitive and raging mad.

This DLC has given the devs at Borderlands the chance to get even weirder with the environments, enemies, and storyline. You are venturing into the twisted mind of a character, and the insanity of your surroundings really represents that.

The environments are a combination of thought and memory, with the first new explorable and playable area a memory of the Siege of Castle Crimson, a battle that Krieg himself took part in.

Next up is Saphire’s Run, a bizarre dream-like environment with a constant onslaught of weird and wonderful enemies, all beset on destroying you. There is an evil train. Yes. It is fast, huge, and out to get you.

The final part of Borderland’s new DLC is a journey into Krieg’s origin story, called the Benediction of Pain. It’s likely the story takes a more moving jaunt here, as you learn of the horrors faced by Krieg at the hands of Hyperion Scientists.

Overall, Psycho Krieg and the Fantastic Fustercluck looks like another hilarious and strange addition to the Borderlands canon, and definitely worth checking out if you enjoyed the previous 3 DLCs.

This is the fourth DLC for Borderlands 3 and is included in the Borderlands 3 Season Pass but you’ll need a copy of the base game to play the full expansion.

It releases today (September 10th) on Xbox, PC, and PlayStation, keep an eye on the official Borderlands Twitter for a release date from Gearbox – nothing has been confirmed yet!

Nov 12, 2020 Chris Miller 6570
Borderlands 3 arguably has some of the best gunplay of the franchise thus far; weapons are crisp and unique, drops are heavily varied, and there is a...