Hearthstone’s New Duels Mode Is Pretty Fun, But There Are A Few Changes That Need To Be Made

Hearthstone received an update yesterday that marks the start of the Madness At The Darkmoon Faire and the introduction of a new Beta gameplay mode, Duels. Duels is a new take on the solo adventure mode that allows you to face off against real-life opponents. Build a basic deck to begin with and collect more cards and loot along the way.

You start off by building a 15-card deck, choosing a Hero, and gaining a unique hero power. To build a decent deck you will need some cards in your collection, to begin with. You can only get early access to the Duels game mode by purchasing the Darkmoon Faire expansion pack.

Like any Hearthstone mode, there are a few balance changes that should be made A.S.A.P. The one that stuck out to me after a few hours of playing was the power of the Robes treasure. This cuts the cost of your cards in half but makes so you can only play two cards a turn.

✋ They warned you… stay away

😈 We whisper… come and play pic.twitter.com/PYtEbtTA4P

While the principle of Robes of Gaudiness sounds like a fun mechanic, it actually means that anyone who gets this treasure at the start of a run (the treasures are randomized) means they’ll likely win. Drop massive cards for half the cost? Your opponent doesn’t stand a chance. 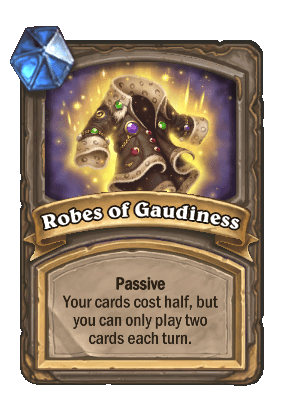 The problem got worse for me after hitting a 4 or 5 win streak. You’re more likely to come up against other strong decks thanks to the matchmaking, so many of the endgame decks I was encountering were all Robes decks with huge cards.

Other than this one particular card, the game mode is actually very fun. The Solo Adventure mode was always pretty fun, and now each run feels a bit more diverse thanks to the uniqueness of other player’s decks. It’ll be interesting to see how the meta develops over the coming days.

The Duels mode was introduced alongside the new expansion, Darkmoon Faire. This features the return of the Old God cards, C’Thun, N,Zoth, and Y’Shaarj, and a new gameplay mechanic called Corrupt. Corrupt allows your cards to be upgraded every time you play a higher value card – a pretty interesting mechanic.

Lastly, the new expansion also overhauls the dated Hearthstone achievement and reward system. There is better tracking for your in-game stats and achievements and a better rewards system that gives back to the player.

HEARTHSTONEHEARTHTONE: MADNESS AT THE DARKMOON FAIRE

Best Champions To Play In League Of Legends: Wild Rift To Dominate Your Enemies And Climb In Rank