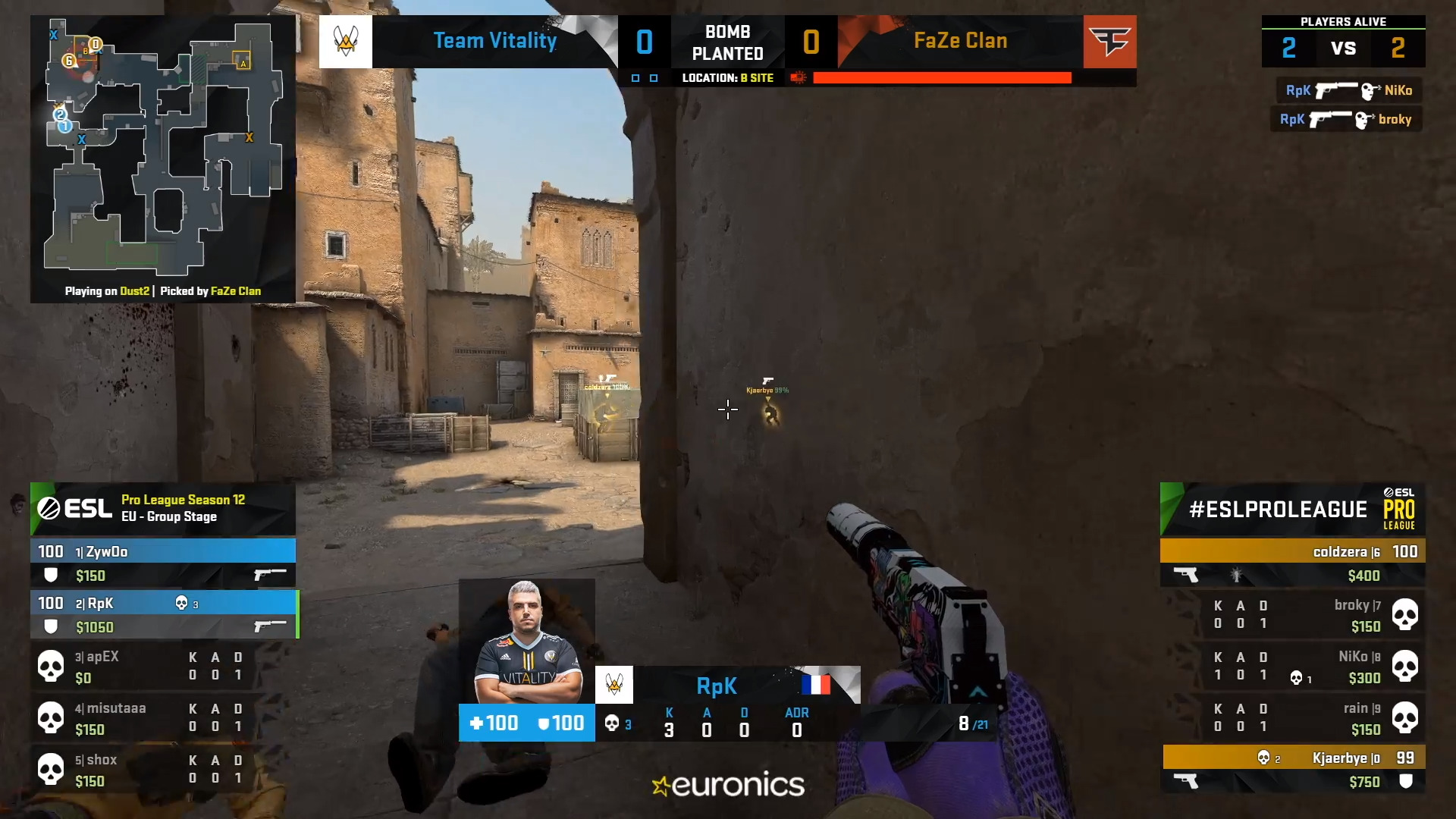 Hot and heavy would be the ideal way to describe Team Vitality (GS#1) at the moment as they’ve clawed their way up to the #1 seeded team in the world based on HLTV’s rankings; FaZe (GS#14), conversely, have found themselves on a downward trend since the middle of June with a 33% win rate of the past three months.

Yet eyes were peeled during the match-up today as Vitality took on FaZe Clan in a Bo3 series that would either highlight the astronomical skill-level of Vitality, or offer reasoning for FaZe to being their resurgence back into the top ten.

WIth fan cams and only an occasional rat play, AWPs, and stunning defenses, the match was primed today for a knock-down-drag-out fight between these two top fifteen teams.

FaZe picked Dust2, Vitality opted for Overpass, and Nuke was left over as the decider.

Vitality took on the role of CT to kick off Dust2, with FaZe putting together an impressive string of six in the first half, four by way of demolition. Vitality managed to stem the economy bleed on the eighth round on the back of RPK (le Tank!) picking up four kills with a Deagle in what would become a consistent showing for the French CS professional turned mechanic turned CS:GO professional today.

FaZe was able to right the ship before it listed too heavily, finishing the first half at (6:9). Le Tank continued in the second half, with Vitality putting up a staggering ten rounds while dropping only two points to FaZe as they took the T mantle and exploited every weakness that FaZe had, bringing the first map of FaZe’s pick (16:11).

Overpass was next as Vitality’s pick, and to say that RPK was having a monstrous game is putting it lightly. Vitality began on T side with two quick round wins, followed by FaZe putting five on the board by way of elimination; Misutaaa swung the pendulum back onto the side of Vitality with a 3K A-site AK pre-plant spray down, and ZywOo offered a bit of the classic AWPing that the French star has made his name with.

It's half time on Overpass and @TeamVitality just lead 8-7 as they move to the CT-side!#ESLProLeaguehttps://t.co/ZvDWXMUbM0 pic.twitter.com/4aD3WvpZub

The first half of Overpass ended at (8:7), and Vitality was primed and ready on matchpoint to begin the second half on CT, which they did with another two on the board by way of elimination.

The second half was consistently punctuated by FaZe offering sporadic points to stop the snowballing Vitality’s economy, yet it wasn’t enough; Vitality picked up  a clean second half with eight points to FaZe’s three, ending the match (16:10) in favor of Vitality.

RPK had an arguably defining match of his career, taking the Player of the Match award thanks to his highest kill differential of +14 at 44-30 (21 hs), and FaZe once again go back to the drawing board for strategies and counters.

Jan 20, 2021 Chris Miller 7100
It's fair to say that there was a bit of concern in the air as Team Liquid announced a mutual parting with Russel 'Twistzz' Van Dulken as the young...

Jan 19, 2021 Chris Miller 6080
It's difficult to discern precisely who the best player of 2020 would be for Counter-Strike: Global Offensive as the title as it's played...

Jan 10, 2021 Chris Miller 6260
Hopefully everyone made the most of their player break, as the next heap of professional Counter-Strike is already coming flying in, threatening to...