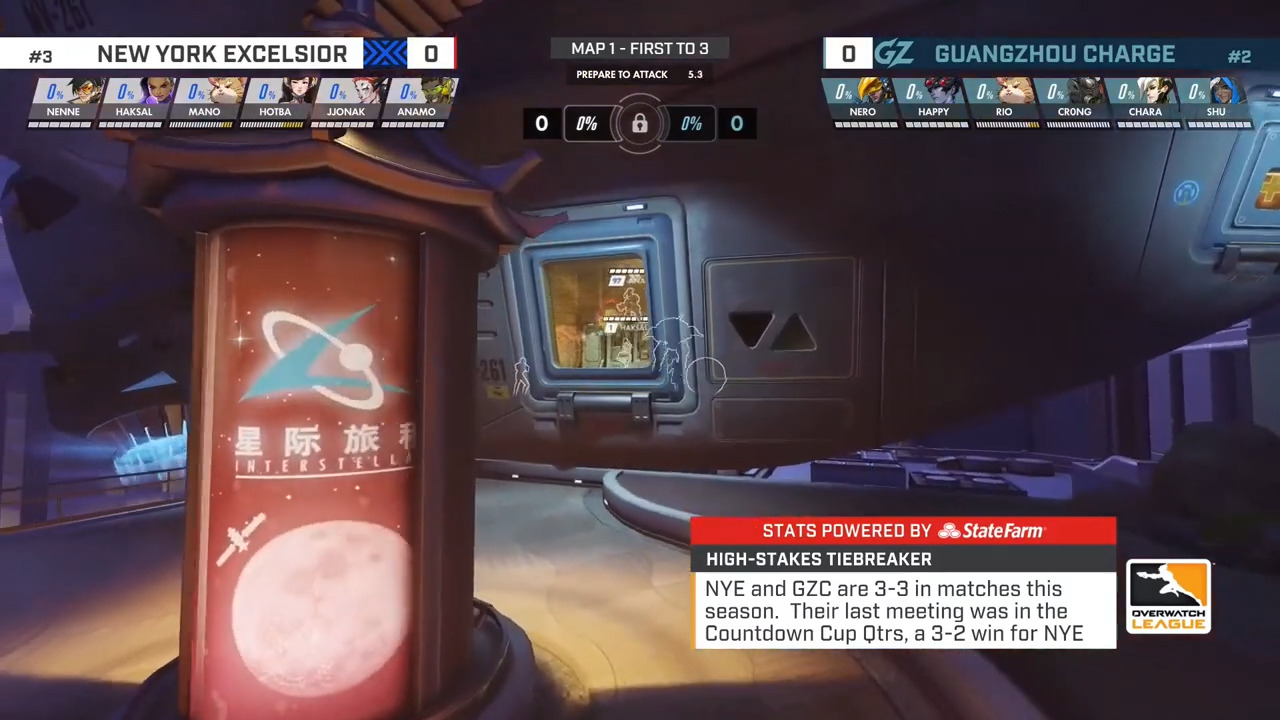 Two strong teams met today in the Asia Bracket for the Overwatch League playoffs, with New York Excelsior (ranked #7) versus the Guangzhou Charge (#5) met each other this morning with both teams desperately attempting to avoid getting dropped from the playoffs; whichever team loses today drops from the lower bracket, and simultaneously drops from post-season play.

In the Bo5/First to 3 series that is the standard format for the Overwatch League, we once again found two highly-ranked teams within the standard League season matching against each other in the lower bracket; it’s been an interesting post-season thus far, at the least.

The colossal clash began on Lijiang Tower’s Garden with NYXL showing a noticeable absence of their IGL SBB; Guangzhou brought out a Pharah/Sombra/Ball/Hog/Mercy/Ana comp, while NYXL responded with a Tracer/Sombra/Winston/D.Va/Moira/Lucio.

The Charge’s composition favored more poking across the map with Cr0ng’s Hog for the Charge working much how we saw the Washington Justice yesterday operate; pulling players out of position for the rest of the team to capitalize on. Guangzhou Charge took control of the first point, and held it thanks to Nero on Pharah up to 99% when NYXL was able to trigger overtime and then hold the point up to 100%, swinging the map’s pendulum into their favor with relative ease and taking the first round.

The second map within the Control series brought about the tight corridors of Control Center, and both teams brought a Mei/Rein/Zarya/Lucio with NYXL opting for a Sym and Bap while Guangzhou opted for a McCree and Moira.

Happy on McCree for the Charge brought out a fearful level of poke damage, forcing Nenne to shift from Sym to McCree to match after Charge took first control. The comp shift worked out, and NYXL switched control after GC gained 37% on the board while NYXL opted to play defensively on the point using the shields of Reinhardt and Mei successfully time and again; NYXL took the second point of Control and started the series up (1:0).

The second map was the hybrid Numbani with NYXL on attack, hosting Nenne on Reaper with a standard tank-line of Winston/D.Va allowing the modern dive with a Sombra accessory; Moira and Lucio rounded out the comp that was mirrored by the Charge. NYXL dove on the point attempting to force the Charge off the point, losing their tank Mano in the process which was returned by Nenne wiping the Charge with a Death Blossom that resulted in the first point being over on the first fight. The slide continued for the Charge as NYXL arguably walked the cart throughout Numbani, gaining all three checkpoints with 3:07 left on the clock.

The mirror compositions continued as the Charge began their attack, struggling to gain the first point until Cr0ng managed a zoning self-destruct ult with D.Va and shifting favor into Charge to gain the first point with a little more than a minute remaining. Charge pushed up towards the third checkpoint with relative ease until they were foiled by an NYXL defense punctuated by Haksal’s Sombra emerging and using her EMP to shutter every attack, leaving the Charge unable to finish the map.

The third map was the 2CP Temple of Anubis, highlighting why many players are frustrated with how the 2CP maps currently operate; both teams finished their first run, and then ended the map on a Draw as neither could gain a tick on their second run after a 22-minute map.

If you're @owhappy2 and you know it…

This led the teams to Havana, the bright and cheery escort map featuring long sight-lines and multiple small pockets by the carts path; NYXL began on attack with a Widow/Genji while the Charge brought a Hanzo/Widow with double off-tank featuring Sigma and Hog, relying again on the ability to pull players out of position for the team to eliminate.

Haksal’s Genji was a decisive factor for NYXL’s push; fans of Haksal know that he’s a legend on the hero, and he proved it consistently cutting down everything from DPS to tanks with relative ease giving NYXL an easy first point. The second point offered the Charge a difficult task with their double sniper/double off-tank composition, as the factory is tight and easily contested, encouraging flanks and dives before snipers can become comfortable; this ultimately offered the NYXL a free push for the second point as Haksal picked up another three kills to close the second point.

NYXL had four minutes to capture the third point, and they only needed two minutes; the double sniper fared well enough for the Charge, but the off-tank strategy ended up costing the team as they couldn’t maintain forward pressure. Guangzhou Charge then returned the favor of a quick first two points, stymied temporarily at the first point thanks to Nenne’s Widow, but managed to beat the NYXL’s time bank when they concluded the push on Havana.

NYXL managed to maintain their overtime through almost to the final point on their second run, ending with five points captured and 19.99 meters remaining. The Charge could not fare as well, beginning their overtime shortly after capturing the first point before Haksal’s Sombra ult offered a hack on four members of the attackers that offered easy pickings for the NYXL.

The Charge hasw dropped out of the playoffs after a close (3:0) where the scoreline simply didn’t tell the whole story. NYXL came out swinging, and they’re going to have to face the winner of Shanghai Dragons versus the Seoul Dynasty.