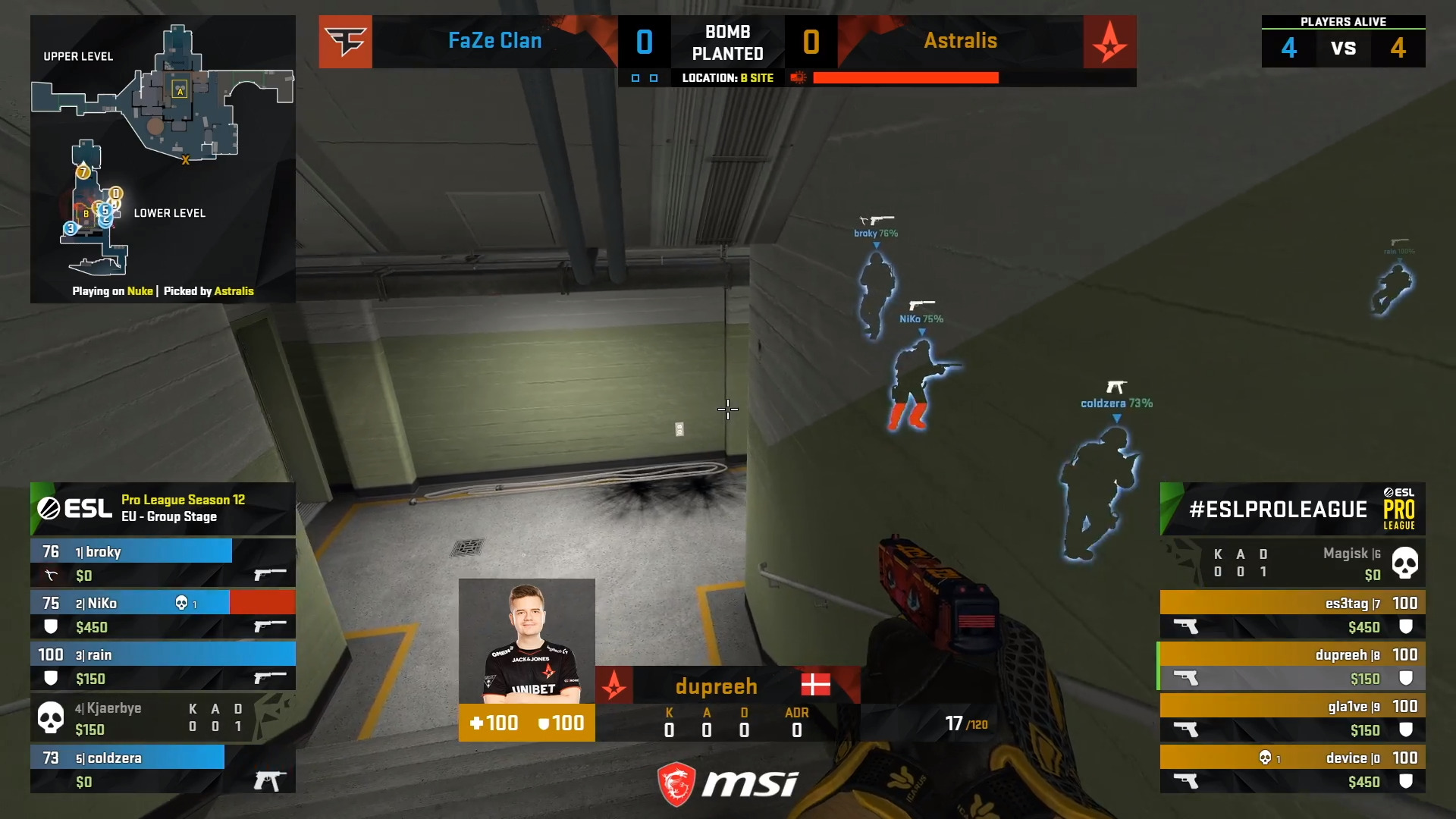 It was going to be a colossal match-up.

The European FaZe Clan were going against an arguably weakened Astralis as Gla1ve finally had returned from his absence and was settling back into his role of IGL for the legendary Danish team that has spent an astonishing amount of time at the highest seed in the world, only to crumble with burn-outs and the pandemic shifting how professional Counter-Strike: Global Offensive could be played.

FaZe stepped forward with a lineup of NiKo, rain, coldzera, broky, and Kjaerbye versus Astralis line-up of device, dupreeh, Magisk, es3tag, and Gla1ve. Es3tag was still in the line-up after Astralis recent struggles showed him to be a rather valuable addition to one of the most prestigious teams in CS history.

Astralis had first map pick and they opted for Nuke, while FaZe chose Train for the second.

Astralis began their offense on Nuke with a massive statement, winning the first nine rounds without offering FaZe a say in the matter; five on eliminations and four on defuse.

FaZe managed to eke out a response with four points while Astralis picked up an additional two in the first half, which ended at a (4:11). The second half initially offered promise, with FaZe picking up a clean demolition, yet Astralis had a massive point advantage that FaZe could not surmount in the second half.

Nuke went the decided way of Astralis at (7-16), and FaZe were expected to pick up their own map choice of Train.

Apparently FaZe didn’t get the script far enough in advance.

FaZe began on T and managed a whopping three points (via demolitions) across fifteen rounds, forcing Astralis to defuse only twice. It was a one-sided stomping that was as difficult as it was to watch as it was for FaZe to play; Astralis simply had an answer for every strategy played, and consistently won aim duels across the map no matter the advantage. Astralis, on the eighth round of Train, had every player maxed out on cash at $16,000. The second half once again showed to be a monumental climb for FaZe, who capitulated after six rounds in the second half.

Rounds like this are the reason Counter-Strike is the greatest esport of all time.#ToTheStars I #ESLProLeague pic.twitter.com/Yszzg5WAFK

The score was (5-16), and FaZe took a brutal loss to the chin in a clean sweep (0-2) that they frankly looked ill-prepared for.

A massive factor was Lukas ‘Gla1ve’ Rossander himself who looked to be back in fine form; he led the server in kill differential at +20 while device offered up a healthy average damage per round of 91.5.

Dec 5, 2020 Chris Miller 6110
Astralis is worth a mouthful every time they're brought up: the team is legendary within the realm of professional Counter-Strike for being a...

Oct 15, 2020 Chris Miller 6260
The rumors that were circling around the professional scene of Counter-Strike yesterday have just recently been confirmed: the sudden burgeoning...