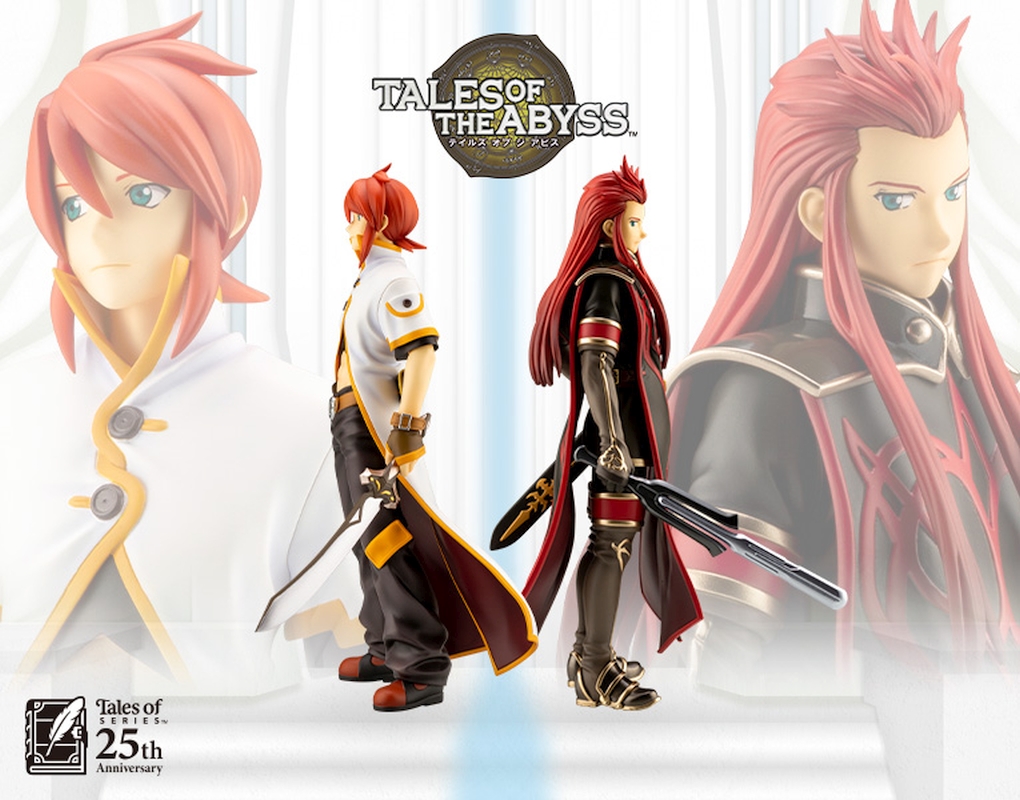 Tales of the Abyss will soon celebrate its 15th anniversary. Bandai Namco has announced the launch of Luke and Ash figures on the Kotobukiya Japanese website.

The upcoming figure set is based on one of the famous scenes from the game. Both men are standing back to back before they engage in a one-on-one fight. The pedestal the statues stand upon has a pattern from the interior of Hod Temple.

The figures display the men holding onto their swords with one hand and sword sheath with the other. Owners of the statue can place the men in their back to back pose or facing-forward. Since the statues are not glued in place, owners are free to display them however they wish.

As an additional bonus, a bonus faceplate with a smiling expression will be included for both Luke and Ash. Unfortunately, the statues are not poseable.

RELATED: Doraemon Story Of Seasons Is Coming To Nintendo Switch And PC, A Heart Warming Tale About a Village In Natura

Namco Tales Studio developed Tales of the Abyss in December 2005. The game was initially launched on the PlayStation 2, then published by Bandai Namco in North America in October 2006.

The game tells the story of Luke fon Fabre, who was the sole heir of his family. After some events, he is forced into the outside world and embarks on an adventure. But Luke grew up in social isolation without meeting many people.

Throughout the game, Luke has to learn about living outside of his large home and how to survive out in the wide world. His adventures teach him important lessons about friendship and duty. Depending on Luke’s actions, his dramatic change may bring peace to the world or worse.

Years after its launch on the PlayStation 2, Tales of the Abyss was launched on the Nintendo 3DS. The game was first launched on the handheld in Japan in June 2011, and then later in North America in February 2021.

The title became so popular that a 26-episode anime adaptation was created in 2008. Three manga adaptations were also created for the game.

The Tales series prepares to celebrate its 25th anniversary. The 17th installment in the series, Tales of Arise, is now scheduled to launch sometime in 2021.

RELATED: An Artificer’s Guide To 5E: A Few Simple Things Every Artificer Should Know In Dungeons And Dragons

The Tales of the Abyss Luke and Ash figures are scheduled to begin shipping in June 2021.

Jan 11, 2021 Jeremy Green 3840
We are well into January and that's good news if you hold an Xbox Live Gold membership. In just a couple of days, the second batch of freebies will...