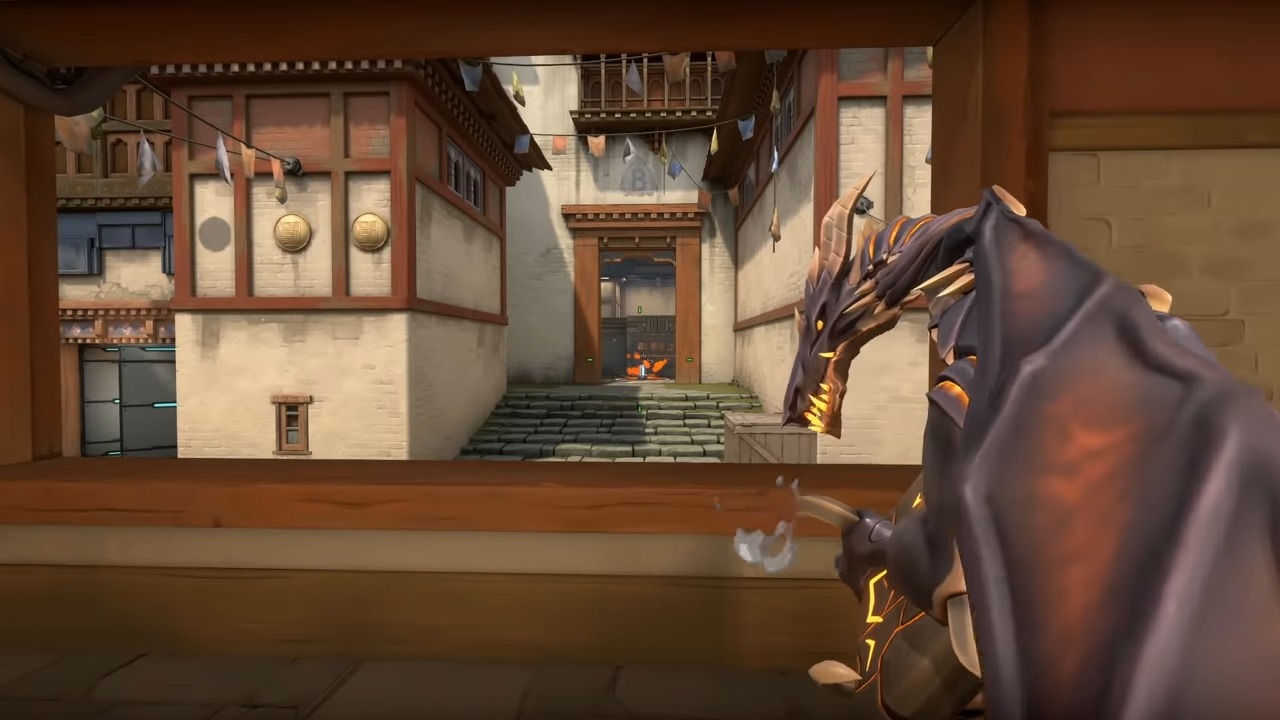 First and foremost: Riot has pulled back the curtain on the newest set of skins that can be purchased in-game for a surprising amount of money: a full bundle will run roughly $95 after users change their money into the in-game currency to purchase the skins in a fun layer of obfuscation.

The skins are pretty wild, featuring a dragon that seems to live as your weapon; your barrel (as much as it can be called that) becomes floppy when reloading, the dragon is rather animated as you’re reloading or rechambering a round, and it all seems very fun, if not outright kitschy.

For some, the pack is a fun twist on weapon skins. For others, the seemingly incessant animation of a weapon that you use to murder others with, in a title that holds a very low TTK, is wildly distracting. There’s yet another issue with the skin pack, however, that doesn’t seem readily noticeable by the developers: readability.

Let’s not think too hard about what part of the dragon’s body is the trigger.

Presuming that there is no way to turn off skins for everyone, as that would lead the purpose of blowing $100 on one weapon pack moot (since no one could see that you’re the type of person to throw $100 at weapon skins), this could bode poorly for Valorant in the future regarding the readability of any scenario.

Let’s say you’re clearing out a bomb site on CT, and you notice two enemy players: one holding heaven and another coming from connector. The one on high-ground is swinging an angry lizard above their head that glows neon green, and entry is holding a dragon of some sort.

Which one should you engage first? Having wild weapon effects is a fantastic way to encourage users to customize their weapons and playstyles to stick out on the battlefield, but for a title that is supposed to be the ‘next big thing’ in competitive esports, it hinders the experience far more than it benefits.

Even if all Elderflame skins roughly mirror the weapons they are replacing, the issue will become more widespread once additional weapon packs are released.

Suddenly, attempting to find the AWP becomes a bizarre game of hide-and-seek as you attempt to figure out which mythical zoo animal you need to pick up before the round resets after a clutch, which isn’t likely to make you many friends when you grab the dragon that’s a Spectre instead of a Vandal because it’s next to impossible to tell what is what.

Riot seems keen to reinvent particular aspects that have worked well for Counter-Strike, who holds onto one of the most established esport scenes in the world. There are only so many ways to reinvent the wheel before you lose all momentum, however. Let’s hope that Riot has already sussed out these details for us.

Oct 8, 2020 Chris Miller 32880
There's very little that is more pleasing than watching cheaters deal with the repercussions of their actions as inevitably, the system will catch up...