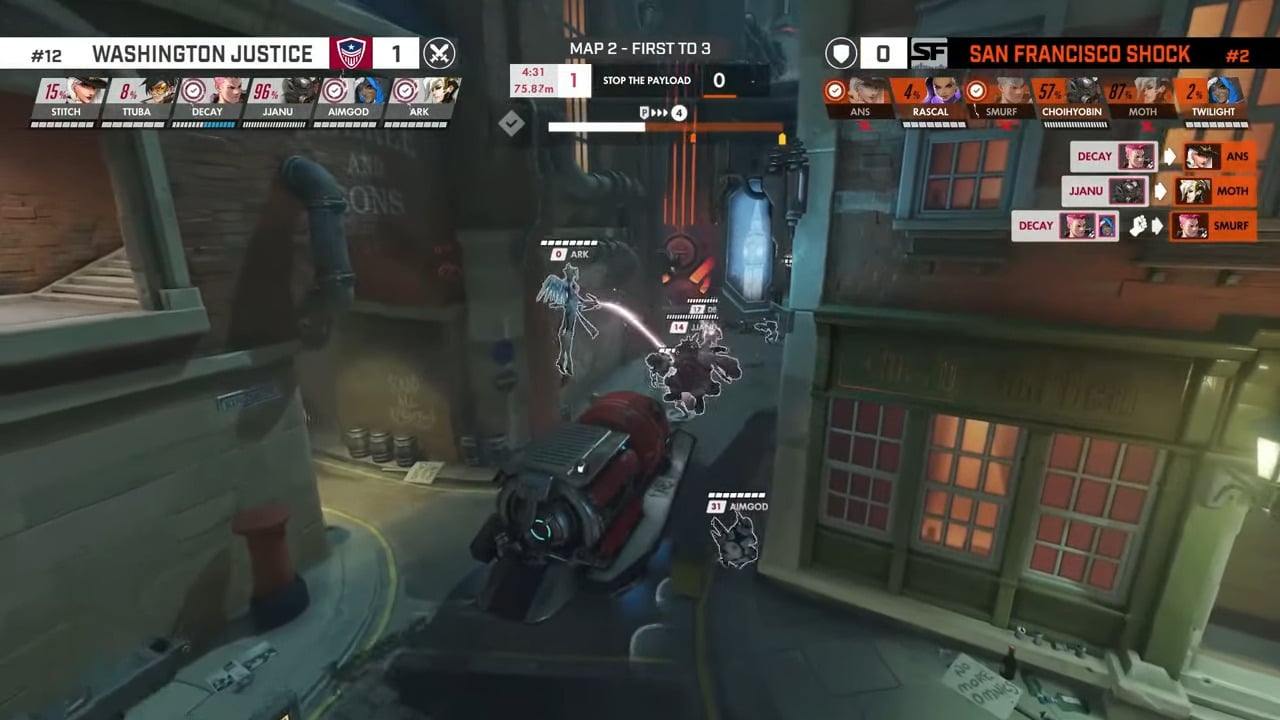 Two teams that have both had major DPS keystones leave for Valorant faced each other this evening, and they still were both a threatening presence in the server.

The San Francisco Shock need no introduction, and the past season hasn’t made them any less frightening throughs the high’s and low’s of online competitive play; Super has had a few key moments in past matches where he would step into the Genji role and simply shred, and the Shock tank line still didn’t look any the weaker.

Washington Justice, on the other hand, has the indomitable Stich (the very same from Team RunAway) on their roster, along with a very solid Sombra TTUBA as his DPS partner in time. The Justice had noticeably struggled throughout the season, however: they’re ranked 19 out of 20 versus the Shock that are in third based on match-difference.

The table was set for something that appeared a very simple stomp for the San Francisco Shock; what happened was wildly unexpected.

The two teams began on Oasis University, with Justice playing a Sombra/Ashe and a double off-tank with Zarya and Roadhog; San Francisco started their battle with a Reaper/Sombra and Winston/D. Va tank line; The Shock started with agreeing to the consensus, taking the control point easily at first and running the percentage up to 60% before the Justice could recap while retaining a massive ult bank that the Shock had no response for; the Roadhog was simply too much with his ability to pull players off of the point and away from their healers.

Gardens was next and Shock came out swinging once again, gaining first control of the point with Smurf’s Winston play continuing to disrupt the Justice’s strategies; Justice managed to wipe five of the six Shock multiple times yet Shock stalled on the point and Justice didn’t manage to put up a single percentage before Shock took the win.

City Center was the final Control round map, and Justice took the aggression on the back of TTUBA’s Sombra and Stitch on Ashe as they continued to run the double off-tank which proved to be Shock’s comeuppance based on the value that JJanu received from his Roadhog alone; Shock managed 15% in a brief offensive before the Justice clutched the map.

King’s Row was next in this battle of David and Goliath, and Shock began on the defense while Justice brought an attack that mirrored their prior round; double off-tank with Ashe and Tracer, and the team was firing on all cylinders on the first point that was captured within a minute while Shock simply fell in front of the players while Justice beat them in the literal neutral, allowing them to build up massive ult banks for the second point which rolled as quickly as the first.

The Justice took the second point with over five minutes of extra time, and they clutched the third point after an additional 20 seconds that left Justice with 4:40 in the timebank. A feat that Shock seemed quick to repeat as they achieved the second checkpoint with five minutes to spare; a massive struggle, however, gave the Shock only 23 seconds on the second run which proved to be a fatal mechanic for the favorite.

At the half, the Justice held a (2:0) over the favored San Francisco Shock. The confusion could only be matched by Counter-Strike competitive play, where masters of the craft have recently struggled against newer teams in matches that bald bookies.

Volskaya Industries was up, and Justice was on offense as the mental of the Shock was assumed cracked looking at the scoreline: Justice continued their same line-up and Shock brought out Widow and Tracer in a deadly duo of strength and speed. The Justice was able to scrap together the first point, and the second point found Shock sitting on a deep ult bank that continued to tower over the Justice and their offerings as they struck the defensive wall of the Shock repeatedly.

With massive dives on behalf of the Shock against the backline of the Justice, scattering and eliminating Stitch on the dangerous Ashe in a modern rendition of the dive formation; Justice couldn’t pick up a single tick on the second point. The Shock had no such problem; a quick first point capture offered the Shock a whopping five minutes to cap the second point which was ultimately unneeded as they walked in and simply took it.

Watchpoint: Gibraltar was either the match point, or the equalizer, and suddenly we were looking at a very possible close game as the Shock began on attack with ANS playing a phenomenally off-angle Ashe while Stitch responded in kind with his own. Shock’s offense proved far too great of a threat, however, as they swept all three points in relative ease with 2:38 in the bank thanks to consistent backline dives against ARK on Mercy and AimGod on Zenyatta. Justice then responded with their own clean sweep with 2:42 in the timebank.

It consistently was the battle of Ashe as Stitch and ANS both dragged for their teams while their other DPS players would keep the attention away from the damage dealer with harassing fire; a meta formed seemingly for this match alone. The Shock took their second attack and was stopped shortly after the first point at 25 meters. All the Justice needed to do was push the cart 30 meters, and the Shock would be relegated to the lower bracket. The San Francisco Shock managed to gain an ult bank advantage early on the back of two won fights, and they used them sparingly until the clutch final seconds, where they unleashed a barrage while Justice attempted to retake.

Once again, we were looking at a map five after two teams with a startling rank difference seemed even keel, blow for blow.

It all concluded on Lijiang Tower, with the tight corridors of Control Room on offer. Shock brought out a Reinhardt on no other than Super, with Choihyobin offering support on Zarya. Thew combined strength proved to be a difficult lineup against their new standard of two off-tanks running with Ashe and Sombra. Justice managed to cycle their ults and regain control when the Shock reached 99%, making it clear they weren’t giving up just yet. Justice managed 99% and Shock switched it back, taking control and the first point for Lujiang Tower after a nasty scrap on the point at 99/99.

Garden was next with its central stage consisting of high walls and gaping entrances, and Justice took a quick point by shifting TTUBA over to Pharah while Stitch took his classic Tracer. Justice spent the entirety of the Garden without catching the point once, and the Justice took the second point of Lijiang. To appreciate, the match was again on even ground with both teams evenly matched, one of the best in the world and a team that struggled throughout the 2020 season, and it all came down to a single point on Night Market.

The Washington Justice wasn’t done from the second point, however; they started by grabbing a massive 82% before the San Francisco Shock could retaliate and build an attack capable of breaking through the off-tank line. Super then opted to match the Justice, and picked up Roadhog. The Shock held the point at 99% until the Justice could turn the tables; they lost control at 91% and the Shock took the final map.

Esports offer exciting times where anything can happen, and the online format only adds more to the fray. A bottom team took one of the highest-ranked teams the distance. Justice drops to the lower bracket while Shock charges onwards.