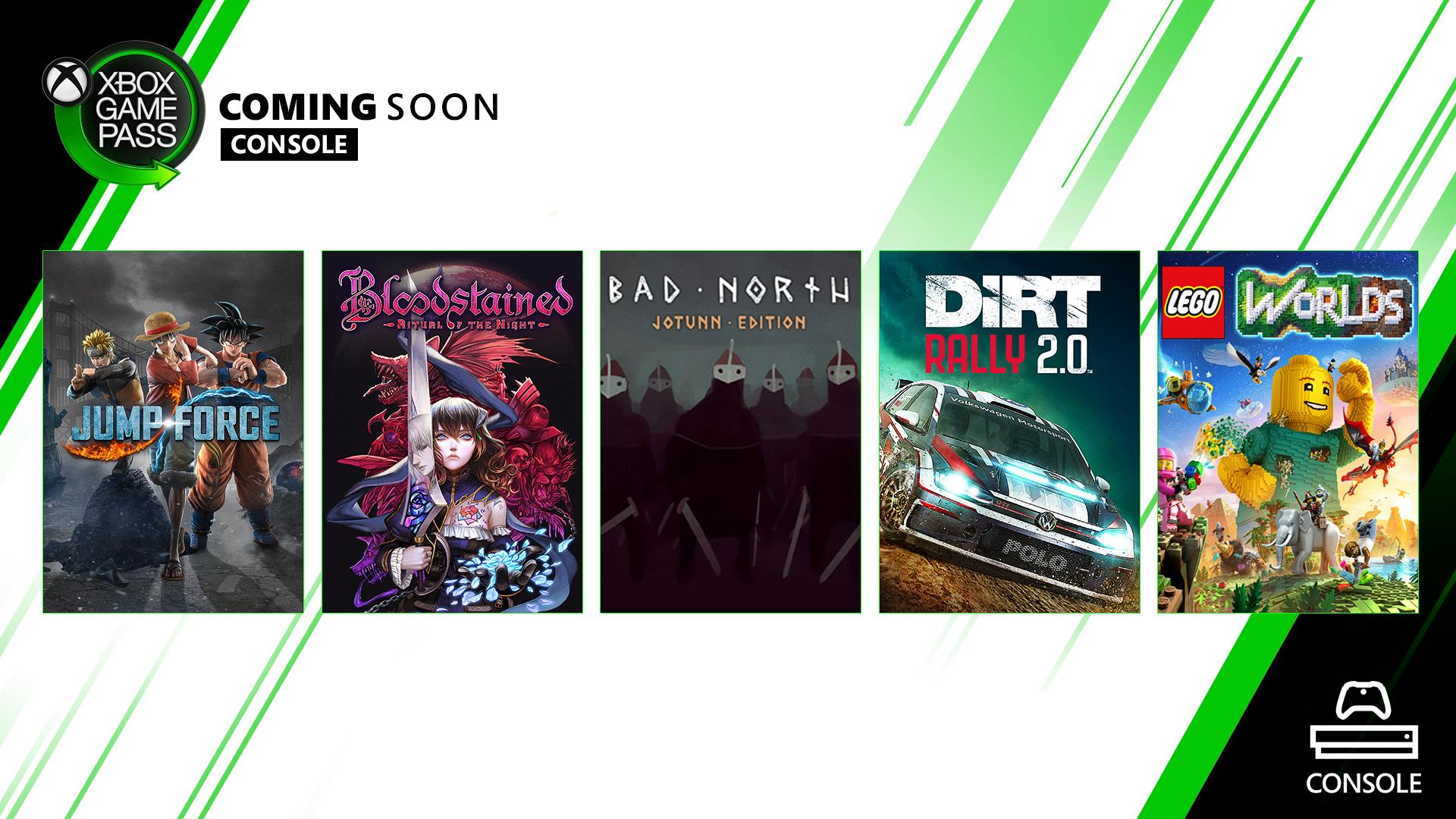 Microsoft and Major Nelson have revealed the next five titles that will be gracing Xbox Game Pass for Console, starting today, September 19. The games cut across different genres, so all subscribers have something to try out.

The five games will be dropped in two phases. Game Pass Ultimate subscribers can download and play Bloodstained: Ritual of the Night and Jump Force. A week later, i.e., September 26, the remaining three titles will be available – Bad North: Jotunn Edition, LEGO Worlds and Dirt Rally 2.0.

1. Jump Force
Jump Force is a 1v1 fighting game developed by Spike Chunsoft and published by Bandai Namco Entertainment. When a venom attack faces the real world after colliding with Shōnen Jump universes, humanity is under siege. Create your avatar and be part of the Jump Force and fight the enemy.

2. Bloodstained: Ritual of the Night
Dubbed the spiritual successor of the Bloodstained series, Ritual of the Night is a Metroidvania-type game developed by ArtPlay in conjunction with several other developers and published by 505 Games. It features exploration-focused, side-scroller action role-playing gameplay. Play as Miriam and use your melee abilities and skills to fight the monsters as you explore the labyrinthine series of rooms.

3. Bad North: Jotunn Edition
This is a real-time strategy game developed and published by Plausible Concept and Raw Fury, respectively. It focuses on real-time tactics gameplay where the object is defending your kingdom from the advancing Vikings. And it doesn’t end there; you have to guide the people to safety through the challenging islands.

4. Lego Worlds
As the name suggests, this is a Lego-themed sandbox game developed by British gaming company Traveller’s Tales and published by Warner Bros. Interactive Entertainment. Build your world using Lego bricks and go around collecting studs, and in-game currency, among other rewards.

5. Dirt Rally 2.0
Racing fans won’t be left behind as racing franchise Dirt Rally 2.0 arrives on Game Pass for console. The 13th release in the Colin McRae Rally series promises realistic gameplay on some of the best circuits inspired by the FIA World Rallycross Championship.

There you have it folks, all the titles for console coming to Game Pass. Nicknamed the “Netflix for video games” the Microsoft’s subscription service offers members a catalog of games, including AAA titles like Gears 5 for a fixed monthly subscription fee.

At the moment, you can take advantage of a crazy offer that gives you two months Game Pass subscription for just $2. Otherwise, the normal monthly subscription is $9.99.

Dec 3, 2020 Chris Miller 4720
We admittedly could have written this up before the title even dropped after it struggled valiantly (and continues to do so) on the Nintendo Switch...

Nov 12, 2020 Chris Miller 8170
Bloodstained: Ritual of the Night has had a bit of a rocky road, paved with good intentions as most of the roads paved to hell tend to be. What...

Nov 8, 2020 Lisa Nguyen 4900
Previously, NetEase Games announced in a press release its plans to work with developer ArtPlay to port Bloodstained: Ritual of the Night to mobile....