After two one-sided series in the LCS and LEC Spring Split finals yesterday, DragonX and Damwon Gaming offered a close best-of-five match in the second round of the LCK playoffs earlier today.

DWG weren’t able to pull off a miracle run. They lost 3-2 against DRX, who advance to the third round of the playoffs where they’ll face off against T1.

Even though DWG had an impressive performance against KT Rolster in the first round of the LCK playoffs, DRX were the favorites in this matchup. They looked strong coming into the series by grabbing two wins in a row against DWG.

DRX secured most of the objectives in the early and mid game. They punished every DWG player’s missteps and controlled the pace of both games. They made the final push of game two after trapping DWG around the dragon pit, making the risky choice of prioritizing Baron over Dragon Soul.

DRX then looked strong coming into match point. They took the edge over DWG in the early game by punishing risky engages while trying to secure objectives. DWG successfully delayed DRX, though, and took the offensive after catching up to them in gold. They made the final push after stealing Baron from DRX and killing four of their players. DWG’s Nuguri had a strong performance on Sett, which was then banned away. 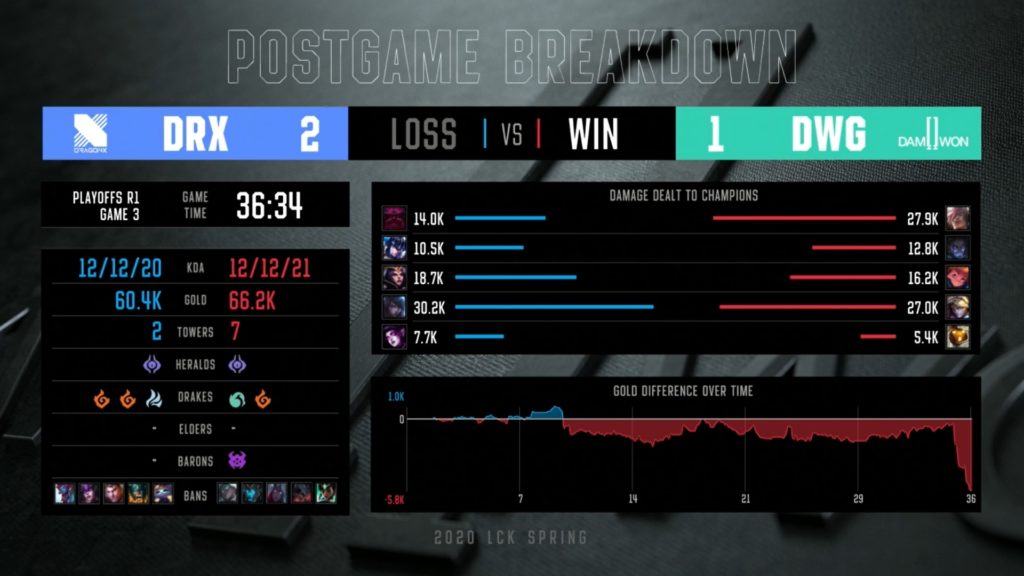 DRX’s draft looked stronger in game four with mid laner Chovy on Irelia and better lane matchups against DWG’s poke composition. For the fourth game in a row, they took the advantage in the early and mid game by securing both first blood and the first drake.

After a messy fight for the dragon, which DRX Keria’s Morgana stole, DWG turned the tide of the game. Despite DRX securing Baron, DWG caught Chovy out of position and decided to push into their base. The Baron buff gave no advantage to DRX. DWG secured the Dragon Soul and rushed their Nexus with a double-teleport play.

The last game of the series, on the other hand, turned out to be more one-sided. DRX chose a composition to wrap up the game rapidly and left space for Deft’s Aphelios to shine. He tore apart DWG players in every fight and made a final push after comfortably securing Baron. Deft earned his second MVP title of the series in game five.

After winning this series, DragonX have two days to prepare for their hard matchup against the three-time world champions, T1. That match will kick off on April 22 at 3am CT.

This will be a hard matchup since T1 are the only team that DRX couldn’t beat in the regular season. The winner of that series will then face off against the LCK’s top team of the split, Gen.G, in the finals.