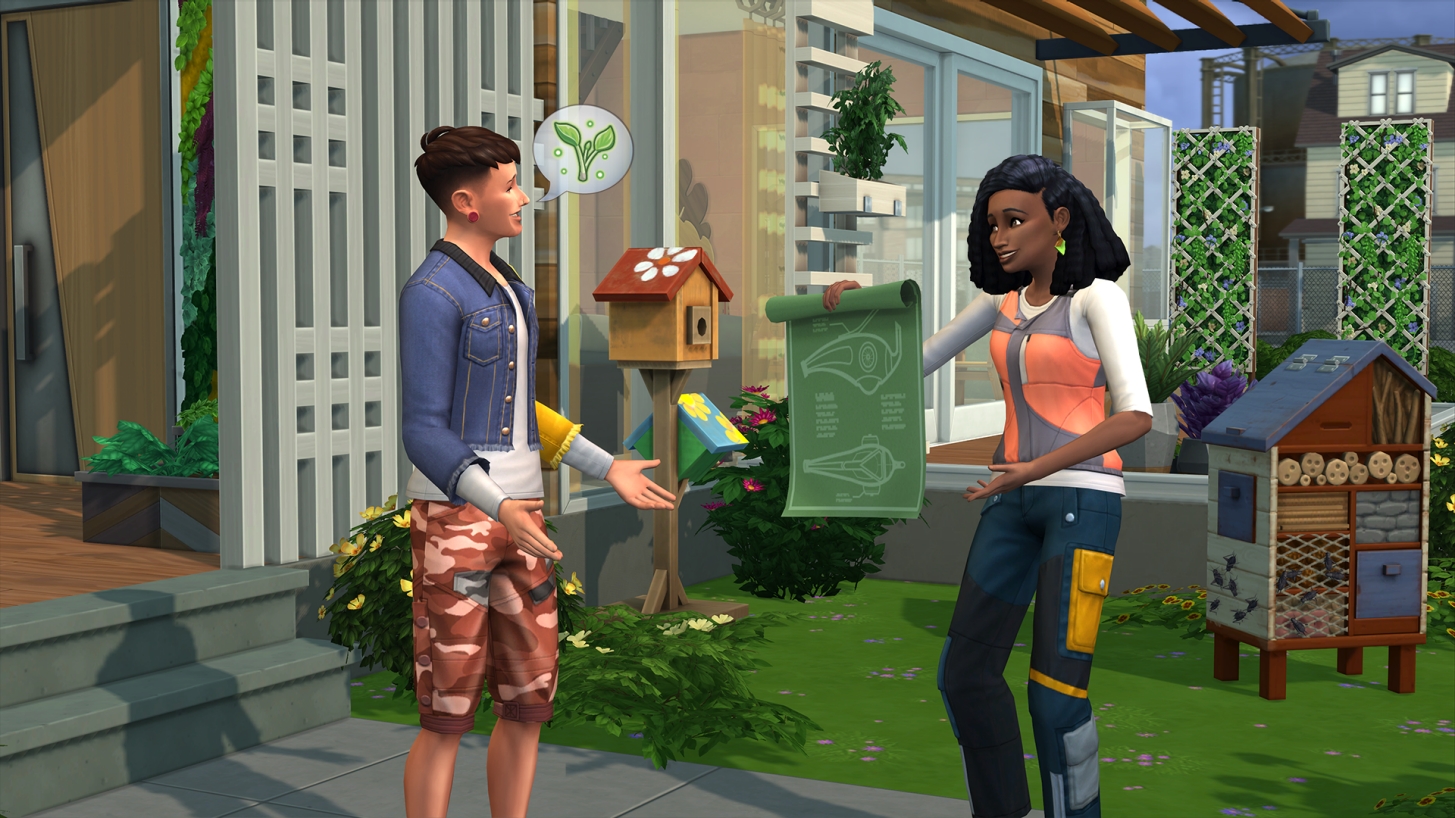 The Sims 4 team recently livestreamed an in-depth look into the upcoming expansion pack Eco Lifestyle. The over two-hour livestream was a deep dive (and major spoiler) into all of the content in Eco Lifestyle. The EP is the newest major content pack coming to the game that focuses on the importance of being eco friendly.

The primary focus of Eco Lifestyle is to clean up the neighborhood. Sims will have to change their habits to live a more sustainable lifestyle, recycle, and clean up or else live in a world filled with smog and acid rain (if the Seasons EP is installed). Sims living in polluted worlds can become so embarrassed by the state of the neighborhood, that they will wear paper bags over their heads. For those that aren’t interested, players can turn this off the negative effects in the settings.

Introduced first was the new world Evergreen Harbor. The world will have three neighborhoods with eleven lots plus two apartment lots. Within each apartment lot are two additional liveable apartments. The City Living EP is not required for the apartment lots.

Sims will have more to do in Live Mode. There are new pre-made Sims plus new careers: Freelance Crafting and Civil Engineer. For players who want to save even more money, they can dumpster dive for meals but beware– Death by Flys makes its return.

“Neighbourhood Action Plans” have been added, where Sims can vote, or influence other Sims to vote. These plans make major changes for neighborhoods for a single world. They include plans such as Power Conservation and Free Love.

Create-a-Sim (CAS) wasn’t covered in as much detail, but more clothing, accessories, traits, and aspirations are coming soon. Traits include eco-related personalities like Maker and Freegan. Sims will also get new piercing options for eyebrows, nose studs, and septum plugs.

Base game updates are coming soon, including ladders, a new inventory system, returning NPCs, build mode gameplay, and more. Firefighters and the Repo Man will return to help or harm Sims. While the Repo Man appeared in University, they only repossessed items if loans weren’t paid back. Now they’ll appear when bills aren’t paid.

Regarding bills, instead of one lump sum, Sims will get to see exactly what they’re paying for. This includes their power and water, which can be sold for a profit.

The livestream video is available on The Sims’ official Twitch channel for anyone who missed yet.

The Sims 4: Eco Lifestyle launches on PC, PlayStation 4, and Xbox One simultaneously on June 5. The free update for base game owners launches on June 2.

Koei Tecmo's Atelier Ryza: Ever Darkness And The Secret Hideout Is the Fast Selling Title In The Series

Jun 23, 2021 Harry Alston 37151
At long last, Skull Town is making a return to Apex Legends, just not in the way that was expected a few months ago. With the release of the Arenas...