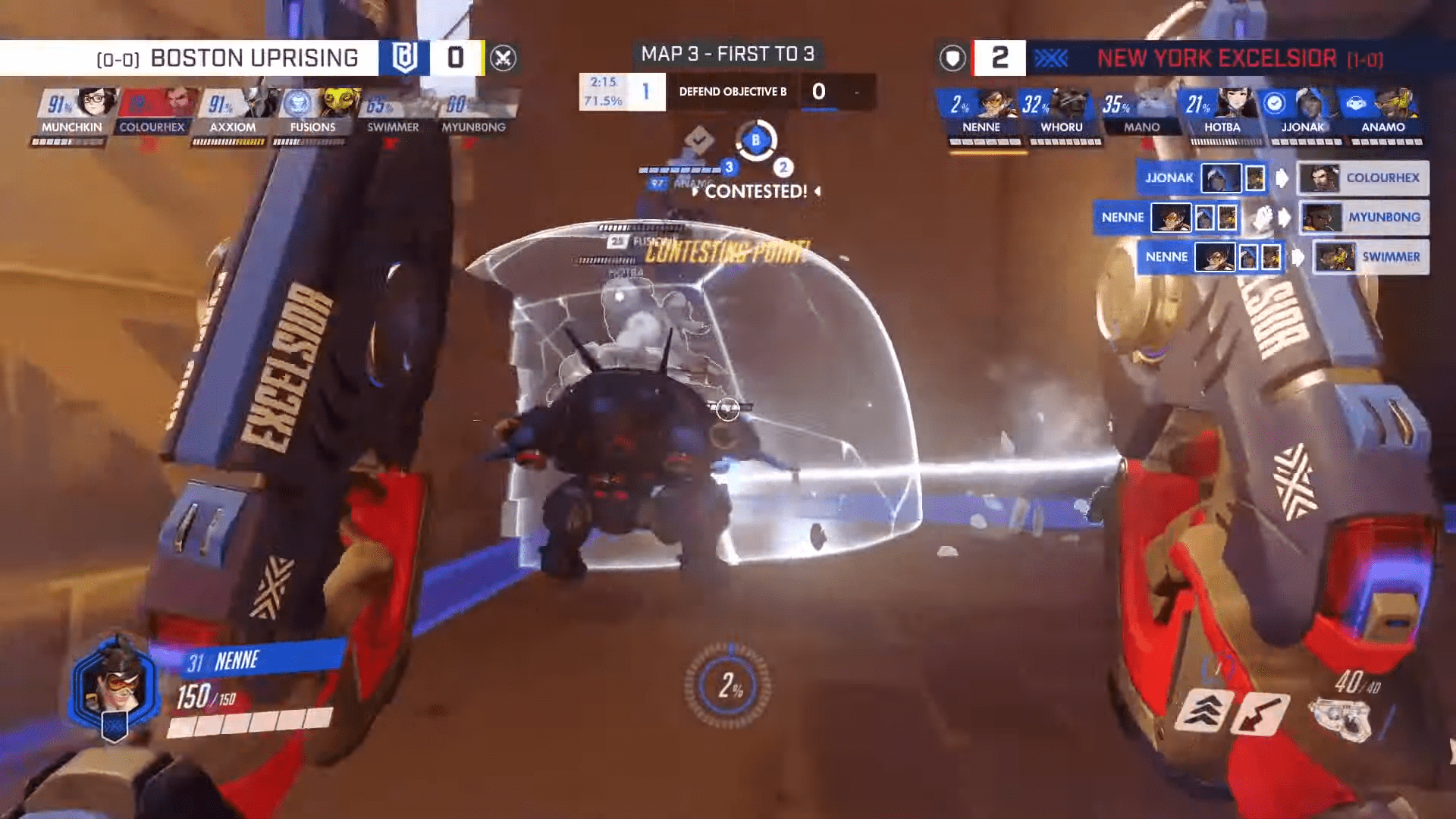 Another day of the Overwatch League has come and gone, bringing with it all of the bits and bobbles that fans are coming to expect.  The meta being shaken up by weekly hero bans ran by Blizzard shows its face today, and some classically strong teams appear like they’re struggling against the ever-shifting sands, that once was a reliable figure that sometimes wouldn’t change for years.

Four more matches to chew through, but we’ll be splitting the matches between the two host cities each day for precision and ease of browsing.

The first two matches of this series showcased Paris Eternal stomping the ever-loving snot out of London Spitfire that appeared to be unsure of how to react to Paris’ unorthodox compositions.  Paris (pronounced ‘Pairee’ if you’re cultured enough) was bringing Widowmaker and Symmetra to bear, teleporting players around the maps while London attempted to run a conventional Reaper/Mei DPS combo.

London came back from the halftime looking a bit more mobile in terms of hero compositions, with Glister often switching between Tracer and McCree to challenge Paris’ indomitable tank line.  FDGod ran an impeccable Lucio on map three, Hanamura, harassing London’s backline on both attack and defense with London having very little to answer with the mobile hero.  Paris struggled to mount an effective attack on Hanamura until the final fifteen seconds of the first point, where London Spitfire simply crumbled under the pressure applied by Benbest on the frontline on Reinhardt while FDGod continued to harass backline.  The second point crumbled relatively quickly with Xzi running a Symmetra teleport to the top of the defensive spawn point, and Paris capped the point in overtime, bringing the opportunity to attack to London.

Nobody but @xzi_ow can make it look so easy.

London mounted a far better attack on Hanamura’s first point, leaving over two minutes for their attack on the second point, carrying with it their hopes of staying in the series.  NicoGDH shined on Mei during the second point defense for Paris, closing out multiple ultimates from the attacking heroes, and FDGod continued to run an impeccable Lucio that ensured players simply couldn’t get onto the point.

It was the first clean sweep of Season 3 of the Overwatch League, and Paris bounced back after their crushing defeat yesterday against the Toronto Defiant.

NYXL is stepping back onto the stage in their home town, and the married man meta once again comes into play as the ever-popular Saebyeolbe (SBB) replaces Nenne on the starting line-up against Boston Uprising.  It’s the first match for the Boston Uprising, and going into the match no one knew what to expect from the as of yet unseen new roster after transfer-season shake-ups, although no one frankly expected Boston to be able to bring any heat to NYXL.

The first map was set to be Oasis, the de facto introduction to a series with a Control map. On the City Center stage of Oasis, Boston Uprising gained first control on the first map, gaining over 90% before NYXL could force the switch due to SBB switching from McCree to his iconic Tracer.  The first Control map went to NYXL after an exhaustive fight on the point with both teams capped at 99%.  The second map stage Garden and Boston Uprising looked a bit out of their element as they attempted to play an Orisa/Ball combo, with a Pharah raining down shots.  NYXL took the second stage with comparative ease, bringing NYXL the first map point.

The second map was a Hybrid map set in Blizzard World with Boston on the attack first, bringing the apparent weekly meta of Mei/McCree DPS.  ColourHex and SBB were both on McCree, and both were doing an admirable job of removing the enemy team for the majority of Boston’s attack until the payload was stalled just before the second point.  NYXL was able to stop the attack at 111 meters and switched to the attacking role while maintaining the same hero roster that they’ve played the entire series thus far.  NYXL easily walked the payload through the 111-meter checkpoint from Boston with over three minutes to spare, giving NYXL the second point for the series.

Maybe we could keep attacking/defending icons up if they were brought to us by Cheez-Its. – /u/survivalsnake via Reddit

The third map was the Temple of Anubis, the pinnacle cancer of two control point maps, and SBB was subbed out in place of Nenne.  While both teams were able to complete the first iteration, Boston stumbled yet again on their second attack, consistently getting their team separated by Mei walls and intelligent ultimates from NYXL that saw them unable to gain a single point of progress while NYXL simply dunked on their heroes time and again, with little recourse.

It’s the first weekend of the Overwatch League, but already Mei is stifling on every map.  There has been a handful of times that Mei was not seen on a team thus far, and some players have taken to calling for massive nerfs on both Reddit and Twitter.

With her ice walls that feature five pillars of 400 HP each, and the ability to encase herself in ice to heal and deny point progress, she’s simply a brutal hero that will continue to get playtime until her abilities are nerfed into the ground.  Weekly bans can only do so much against massively oppressive heroes, and she’s still over-tuned from when Blizzard was attempting to remove GOATs from the stage.