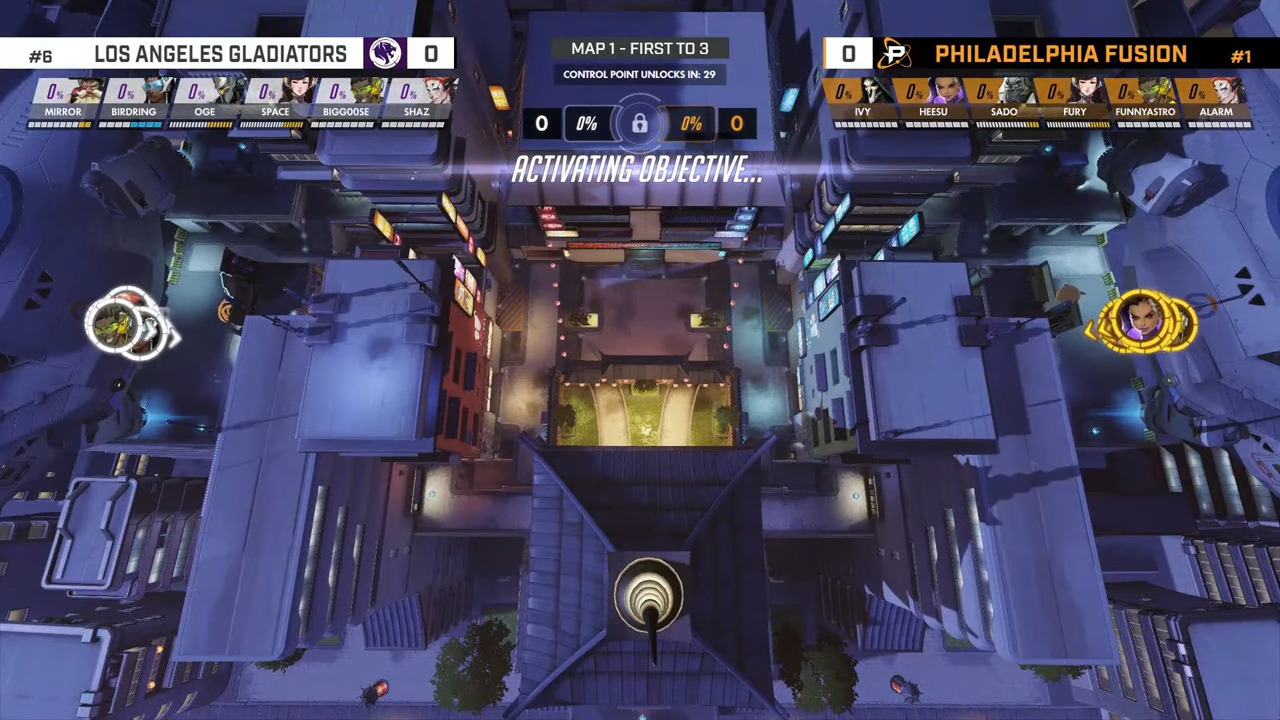 After the LA Gladiators faced off against the Toronto Defiance, Birdring appeared to pass out after trying to rise to his feet; it was broadcasted and looked concerning after statements of relatively poor health began to spread around the forums as the legendary DPS player caught an illness at the wrong time.

Many were hoping that the LA Gladiators would be able to postpone their match-up, but it wasn’t to be as they faced off against the Philadelphia Fusion today to see which team would be sent to the lower bracket.

As LAG was decidedly understrength presuming that Birdring is still sick (he played regardless for the entirety of the match), and the match concluding surprisingly quick, it’s clear what the result was; let’s do the dance anyways.

Once again, it all begins on Lijiang Tower on Night Market; LAG was able to net the first 25%, yet Fusion clapped back with a Reaper/Sombra DPS lineup; the teams continued to pass control back and forth with no clear winner, and both teams were locked on 99/99 until the Gladiators took a decided advantage with OGE taking up massive space on a rare Reinhardt pick.

The second round of Lijiang was on Garden, and once again Gladiators took early control for a short time (16%)until Fusion’s Ivy and Heesu on Tracer and Sombra managed to harass LAG while Fusion managed a massive 88%, bringing the round into one-fight territory. Glad recapped, and Fusion then won the following fight with Sado on Winston which brought the Fusion control of the point yet again. While LAG attempted to stall, Fusion picked up the second round of Lijiang.

All that was left was the Control Center, with it’s tight corridors and difficult entry onto the point, and Fusion came out swinging in the first fight: they capped the point and had a massive ult bank for them to work with as LAG was left trying to poke and get inside. With Fusion at 99%, LAG managed to recap with Mirror on Doomfist and Birdring on Junkrat; the ultimate economy never fully recovered from the initial Fusion push, however, and Fusion managed the win at 81/100.

Up next was the utopic city of Numbani with Gladiators on attack, and Fusion began the round with an early ambush against the LAG while they were moving to point in a modern-day reformation of old-school dive, and Gladiators couldn’t remember how to counter the dive tactic; a heft of time was lost fighting to gain control of the first point, and LAG stalled out just 4.5 meters away from closing the round with three full points.

Fusion managed to reach the third point with 1:30 remaining, and the Gladiators couldn’t manage to clutch a similar defense as Fusion walked in on the back of a (and this was a repeatable point throughout the series) massive ult bank which allowed them to capture, and win the round.

Since we love consistency here, the third map was played on Temple of Anubis with Gladiators on attack. Gladiators continued to lose team fights while Fusion banked their ultimate, and LAG struggled massively to capture the first point; the second point thankfully fell quicker with Gladiators only keeping 12 seconds in the timebank. Fusion competed their initial round with 1:51, and LAG had mere moments to cap in the second round which they failed to do, and Fusion capitalized on the shortened time bank by capping the first point.

LAG drops to the bottom bracket, and the Fusion push forwards.