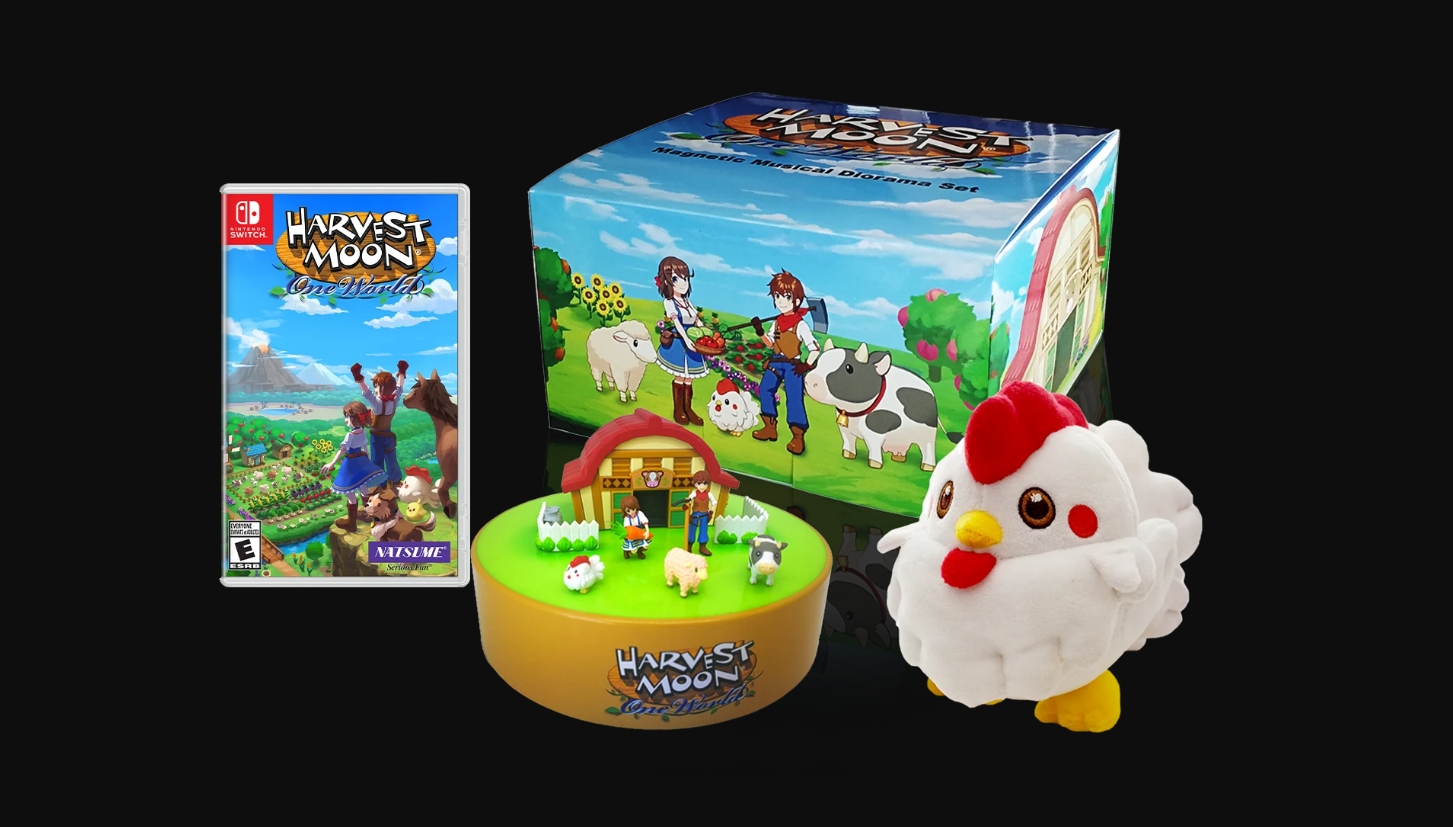 Natsume has announced its partnering with Limited Run Games to release a Harvest Moon: One World Collector’s Edition. The bundle will be available for both the Nintendo Switch and PlayStation 4 version of the game.

The Harvest Moon: One World Collector’s Edition is packaged with the game’s standard physical edition. It also includes a chicken plushie based on the animal from the game. The biggest part of the limited edition package is a music diorama.

RELATED: Flying Soldiers Is Soaring Onto PS4, PC, and Nintendo Switch This September 17

The diorama depicts a scene where the male farmer is standing with a tool while the female farmer is holding a bag. Both protagonists stand in front of a barn. Also included is a small version of a chicken, sheep, and cow. The characters are magnetized and interchangeable in case players can shift their positions.

The musical diorama plays the original song “Spring on the Beach” from the upcoming game. The animals rotate while the music plays. The outer ring of the diorama also rotates when the music is activated. All of the items are packaged inside of a collector’s box if players want to store the items.

RELATED: Gears 5 Boss Has Directly Addressed Microtransaction Concerns In The New Game Saying That "We Are Learning As We Go"

We're excited to be partnering with @LimitedRunGames for a unique #HarvestMoon: One World Collector's Edition!

Learn how to get your hands on this musical diorama, plushie, and game bundle: https://t.co/nsR29lEt8Upic.twitter.com/xc7lRlniAp

Harvest Moon: One World is the latest installment in Natsume’s original Harvest Moon series. The company has developed its own farming simulator game after it stopped localizing the Bokujo Monogatari series, which is now known as Story of Seasons.

Harvest Moon: One World takes players out on an adventure in a big new world. Players journey to discover new crops and make new friends. The locations span from the beautiful beaches of Halo-Halo to the snowy mountains of Salmiakki. The new title was developed with an all-new engine and new graphics.

Pre-orders for the Harvest Moon: One World Collector’s Edition begins on January 5 on the Limited Run Games website. The ordering window is only for four weeks before it’s cut off.

A previous Limited Edition set was previously announced through NIS America. This set contains a physical edition of the game for either the Nintendo Switch or PlayStation 4. Players will also receive the “Life on the Farm” official soundtrack on an audio CD, “Best Friends” animal lapel pin set, and “A Fruitful Season” cloth poster, all contained within a special collector’s box. The NIS America website states the items are still available to pre-order, but the stock is now very limited.

Harvest Moon: One World launches on the PlayStation 4 and Nintendo Switch on March 2, 2021.

Jan 11, 2021 Lisa Nguyen 7880
President and CEO of Natsume Inc. Hiro Maekawa recently posted a New Years' message on the official website. The post spoke about the impact of...

Jan 4, 2021 Lisa Nguyen 6340
Natsume has announced its partnering with Limited Run Games to release a Harvest Moon: One World Collector’s Edition. The bundle will be available...

Jan 3, 2021 Lisa Nguyen 6190
Natsume has released further information regarding its upcoming title Harvest Moon: One World. The company has released images and biographies of the...