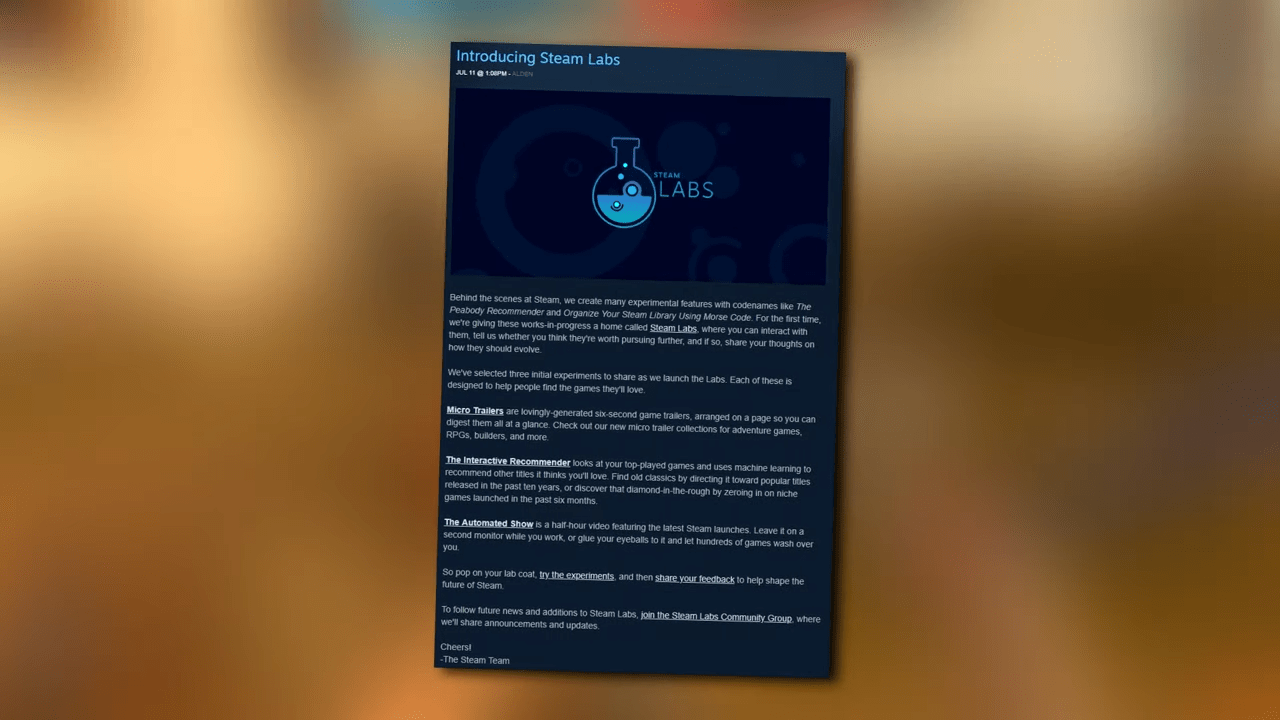 You would think with Half-Life: Alyx coming terribly soon to a global audience that has waited for years with anticipation would be enough to ensure that the Washington company would have all hands on deck, tweaking and polishing the title until moments before the final release.

No one could accuse Valve of sitting on their laurels with such a hotly awaited game on the cusp of release, allowing the Steam platform to tend to itself however momentarily.  Instead, Valve has just pushed a pretty sizeable update to the favored PC gaming platform, bringing the Interactive Recommender live for everyone to experience.  This is yet another Steam Lab Experiment (002, to be precise) that is now coming live as Valve has found the idea to have merit in practice, and all denizens of the platform now stand to merit from the decision.

The Steam Interactive Recommender gives players a wealth of tools to use that allows them to find yet-unpurchased titles based on what they’re played recently, spent the most time in, or simply by tags.

Players can determine the weighting of various aspects based on age, how popular they were with the community based on reviews, and exclusions; all settings are also saveable, meaning that once you find your preferred balance scale, you don’t have to tweak it again.

It also boasts an ingrained inclusion with your Wishlist on the Steam platform, so you won’t be stumbling across games that you’ve already found and included in your ‘future purchase’ list.  Valve heralds the Interactive Recommender as a machine learning experience that looks into the average playtime of millions of users, learning more about titles by looking into similar games players have in common when they spend a wealth of time in a specific title.

For example, I spend an embarrassing amount of time in RimWorld, and I also spend a fair bit of time in ARK: Survival Evolved.

Based on those two patterns, Steam then will look at other players who experience similar patterns and can suggest titles to me based on what those users tend to band together to experience.  It’s frankly a brilliant move that will ensure that even more games are explored on the title that can seem a bit difficult to maneuver due primarily to the number of games available.

Users can explore the system themselves and find their next addiction right now on the Steam platform.  Just be advised that time, unfortunately, continues to pass as you’re diving into your ‘next big thing’.

Jul 4, 2022 Tom Lee 340
Fntastic and MYTONA in May postponed the premiere of the MMO survival shooter The Day Before but decided to transfer it to the Unreal Engine 5...

Jul 4, 2022 Tom Lee 120
It including Splinter Cell: Blacklist and several installments of the Assassin's Creed franchise. Be sunset in September. Most of these games will...