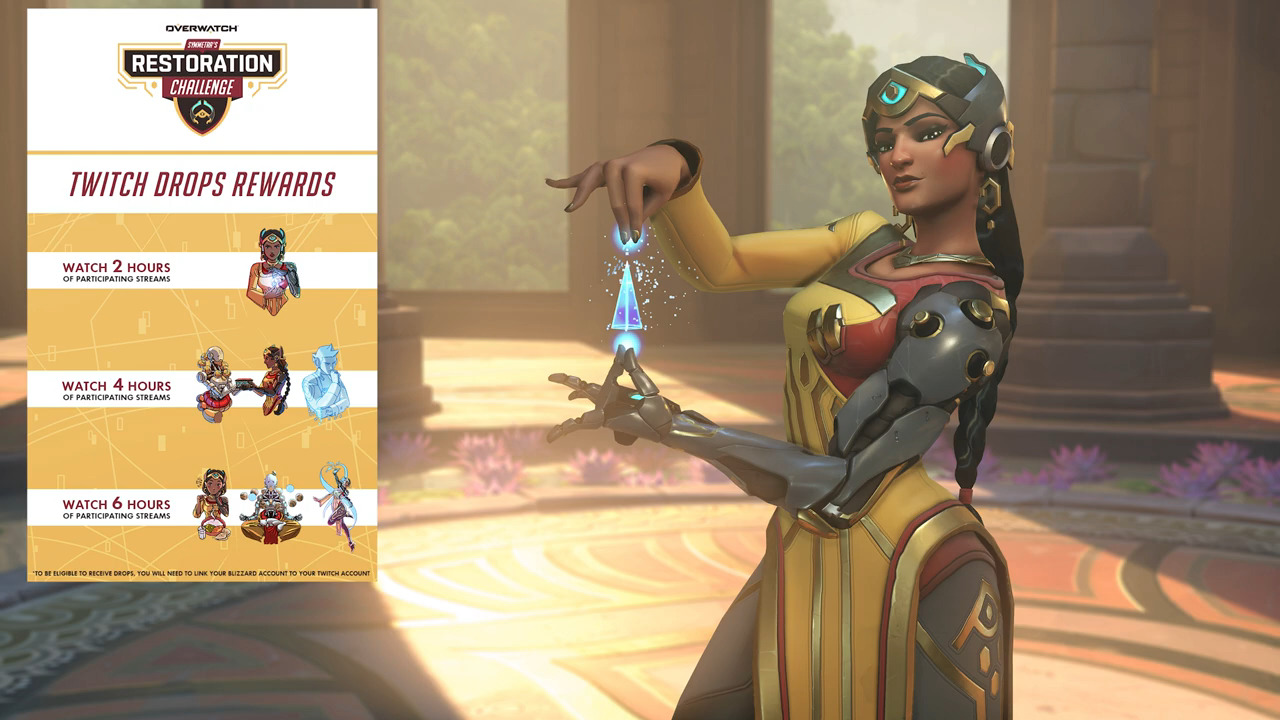 In another series of the mini-event style updates for Overwatch, one featuring everyone’s favorite Vishkar employee Symmetra is finally live. The event corresponds with the release of a new short story titled “Stone by Stone” that prominently features both Symmetra and Zenyatta. The in-game event runs from November 17th until the 30th, so there is still time to jump in and grab those limited-time cosmetic rewards.

The skin in question is called “Marammat” and is epic tier quality like most skins released in this way. It features a golden outfit interlaced with blue glowing “V”s running down the leggings, as well as a neat headpiece and accessories in a similar style. The best feature of the skin is arguably the long single braid that sways to and fro in the back.

In order to receive this skin, you have to win 9 games in either the competitive, arcade, or quick play game modes. This means that pretty much every time you win a game, you make progress towards these rewards. For every 3 wins, you will receive new cosmetic rewards, culminating in the skin upon the final victory. For the 3rd win, there is an icon while the 6th win will net you a spray.

These aren’t the only rewards associated with this event, but for the rest, you will need to head on over to Twitch and link your Blizzard account to your Twitch account. After this, there is a list of participating streams you need to watch in order to rack up hours towards different cosmetic rewards. Details regarding the exact streams that are eligible and how to link your accounts are located in the link on the official Overwatch Twitter post down below:

RELATED: Star Wars The Old Republic Releases Alderaan Stronghold To Public Test Server For The First Round Of Feedback

RELATED: PAYDAY 2 Is Receiving A New DLC After Months Of Silence, Get Ready To Strap In Cause These Clowns Are Crossing The Border

Rewards using this method are earned at the 2, 4, and 6-hour mark of watching the streams. At 2 hours, there is a more serious spray of Symmetra facing forwards. At the 4 hour mark, there are two sprays, one joint spray of Symmetra and Zenyatta, and another who is presumably another character from the comic. The final reward at the 6-hour mark features three sprays: Symmetra preparing food, Zenyatta meditating, and the final one has Symmetra dancing.

The sprays are just small rewards, but all are fairly interesting and a fun challenge for completionists to collect. The event runs through until the 30th of this month, so there is still plenty of time to collect all the rewards. Also, be sure to check back here for all the latest information for Overwatch events and updates.

Time Is Running Out For The World Of Warcraft: Shadowlands Scourge Invasion Event!