The recent Super Smash Bros. Ultimate Tournament that took place at Evo Japan was the birthplace of a truly cringeworthy moment.

Tournament winner Shuto “Shuton” Moriya was awarded his prize of a golden Nintendo Switch Pro Controller and then promptly dropped it on the floor by accident.

It should be noted up front that the prize was already viewed by and large by the gaming community as a joke. Typically, these massive tournaments feature some kind of cash prize. For example, the winner of the Tekken 7 tournament at EVO Japan would receive 1 million yen, which is $9,000 USD.

So why was Nintendo handing out a golden controller? Apparently Nintendo was legally unable to offer a cash prize because it had not registered Super Smash Bros. Ultimate with the Japan Esports Union. That’s because the company has distanced Smash from the label of Esports title since its release last year.

So, as Nintendo’s Mr. Sakurai looked on, Shuton fumbled with the prize as it was handed to him and dropped it on the ground.

The incident can be seen in full here on Twitch.

In the player above, you can relive Shuton’s victory in the grand finals of the EVO Japan 2020 tournament. He takes on Kome in one of the most insane Smash Bros. matches you’ll ever see.

Shuton uses Olimar and his army of Pikmin against Kome, who fights as Shulk. There are some breathtaking displays of Smash skills that will leave anyone who has ever played the game on the edge of their seat.

At one point in the second bout, it looks like Kome has Shuton beat, but a misplaced air slash forces him off the stage. Each of the three bouts were stock battles, where each player was given three lives. Shuton takes the tournament in the third match to become the Evo 2020 Super Smash Bros. Ultimate Grand Champion.

Despite the momentary gaffe of dropping the controller, a grateful and victorious Shuton shared his trophy, medal, and golden controller via Twitter. The rest of the gaming world was left scratching its collective head at the lack of a major prize coming out of Nintendo.

Evo Japan is a major fighting game tournament, and Super Smash Bros. Ultimate is the number one best-selling fighting game of all time, recently dethroning Street Fighter 2 after only one year in circulation.

It stands to reason that the number one fighting game in the world should have been able to offer up a better prize for its Grand Champion at one of the biggest tournaments in the world. 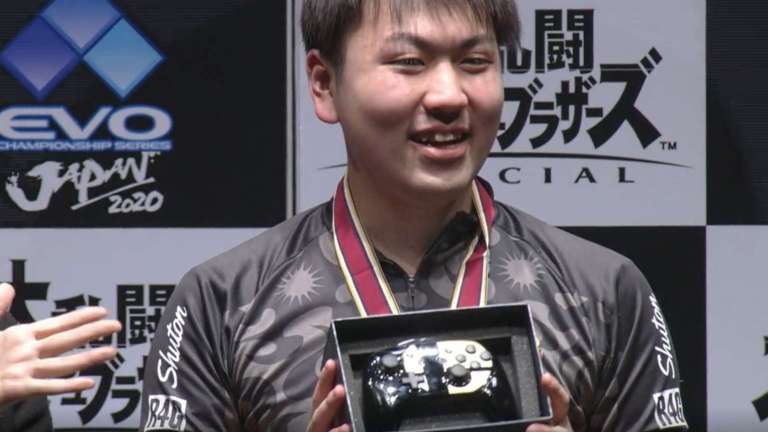