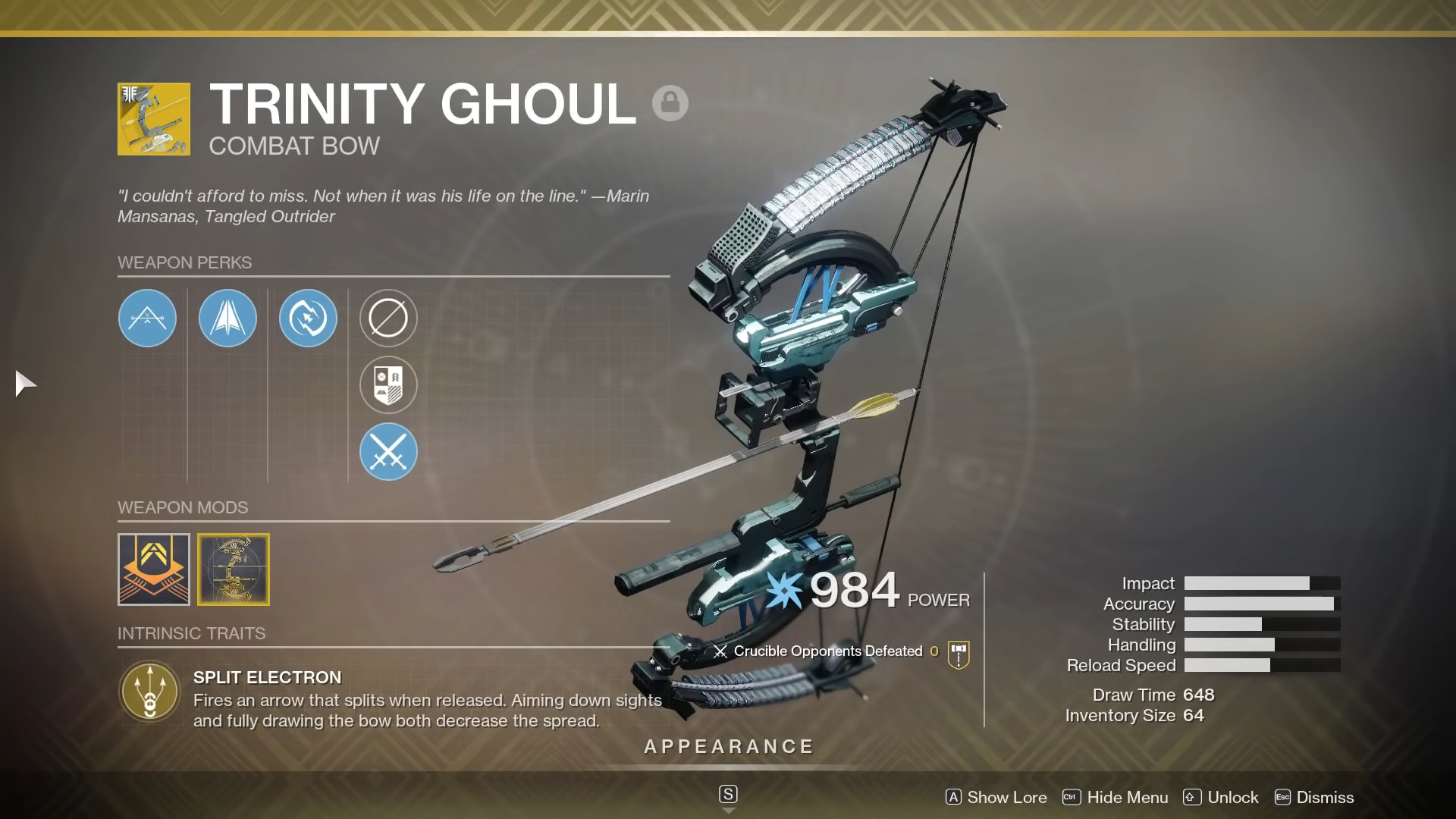 Besides the weekly reset, another activity players look forward to in Destiny 2 is the return of Xur. The strange creature and so-called Agent of the Nine visits good little guardians every week with a host of exotic items for sale.

This week, Xur can be found right at home in the Tower. Travel to the Hanger area to find him. Besides the usual host of exotics, he also carries an item called a Fated Engram for the price of a whopping 97 legendary shards. This item is well worth it, however, as it guarantees a drop of an exotic you do not possess if there are any left to grab.

RELATED: The Indie Shooter Prodeus Is Now Available On Steam

This weekend in Destiny 2 you can find Xur in The Tower.

RELATED: Tired Of Nintendo's Smash Antics? Fraymakers May Be The Game You've Been Waiting For

Starting off with the weapon, this week Xur sells the Trinity Ghoul exotic bow. This weapon has two intrinsic perks, called Lightning Rod and Split Electron. Combined, this bow has precision kills which grant the next shot chain-lightning capabilities, and also fires an arrow that splits when released.

This bow is just so-so with the perks listed above but really shines when combined with the catalyst that was released back during Season of Arrivals. As such, it is definitely worth the time and effort to purchase this week and track down the catalyst during gameplay later.

Now on to the armor pieces, Hunters this week have arguably the best pick with the Gwisin Vest chest armor piece. This chest piece (despite being very aesthetically pleasing) is also a must-have for those who favor the Spectral Blades Super. The Roving Assassin perk reads, “Each spectral blade kill you make before going into stealth will restore more of your Super energy.”

Warlocks have the option to purchase the Vesper of Radius exotic chest piece this week. The idea behind this exotic is solid in that it aims to turn your rifts into something deadly for foes. The perk Planetary Torrent sends out an arc shockwave whenever you place down your rift. Unfortunately, the exotic still isn’t that great even in PvE and is greatly outclassed by other rift-enhancing pieces.

RELATED: Save People From Burning Buildings In Embr - The Uber Of Firefighting, Headed For Steam Early Access

Finally this week, Xur is offering the Armamentarium chest piece for Titans. The perk And Another Thing simply gives your guardian an extra grenade charge. No fancy frills here, but combined with some of the more powerful grenade options this can be a useful and all-purpose exotic. However, it is outclassed by other options for the class in specific situations.

Xur returns every week with a host of new items to collect. As such, be sure to tune back here for information on both Xur’s inventory and the latest Destiny 2 news.

Dec 24, 2020 Seb Bates 3280
In Destiny 2, no matter what holiday you celebrate in real life, guardians celebrate the weekly reset within the game. During the reset, players have...

Dec 19, 2020 Seb Bates 2860
Each week in Destiny 2 a certain traveler returns to a predetermined location in order to sell exclusive weapons and armor to all the good little...

Dec 19, 2020 Seb Bates 4610
This week in Destiny 2, players can look forward to the introduction of the Dawning Event beginning on the 15th. While grinding for seasonal rewards...