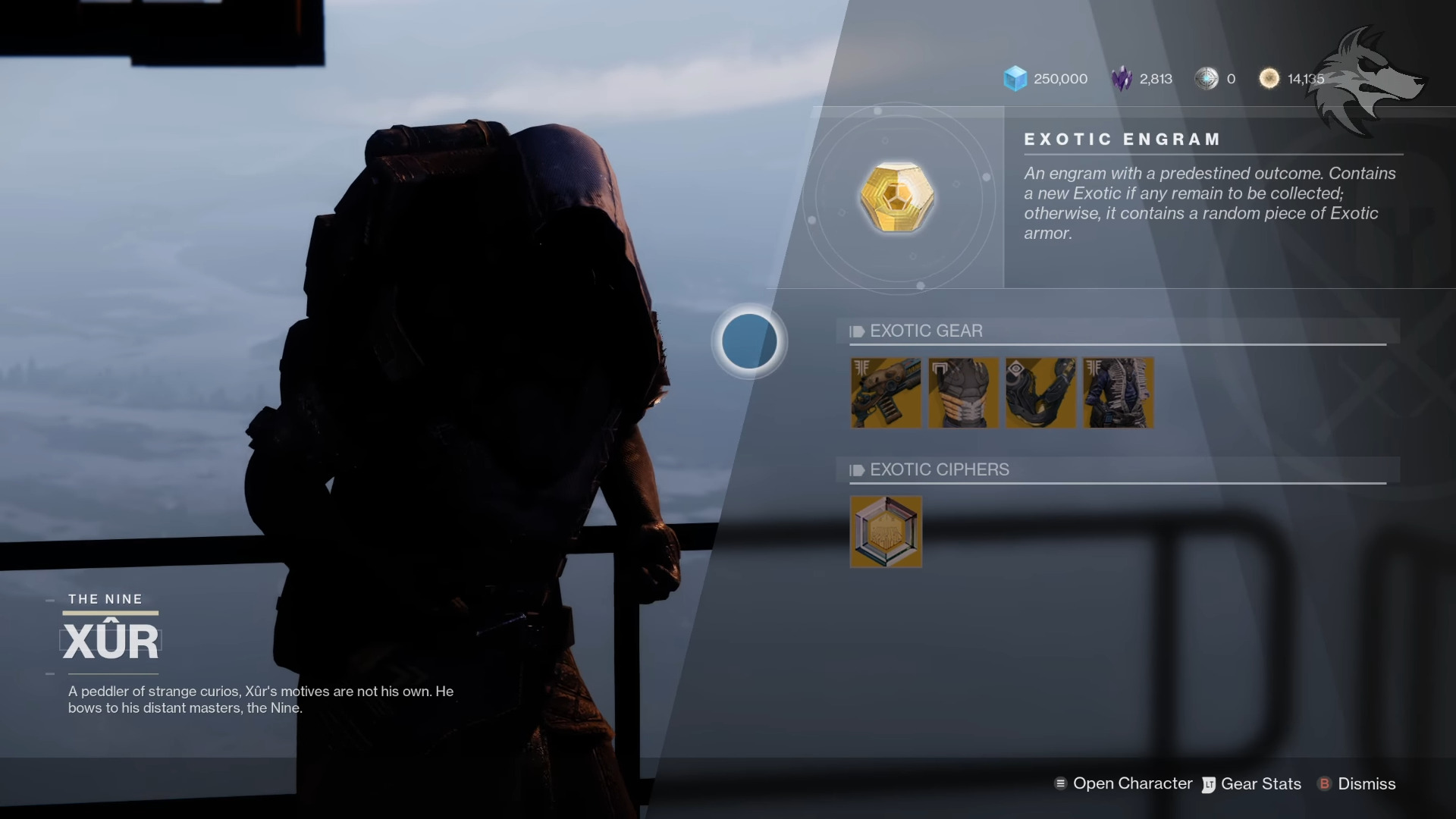 Destiny 2 is a few days into its newest expansion, Beyond Light, with millions of players logging in to have a go at one of those powerful new Stasis subclasses, alongside a host of other new content as well. With Beyond Light not even a week old, players new and old will once again be on the grind for exotic loot. One of the best places to get this loot is from Xur, a wandering exotic loot vendor.

To start off, Xur this week is located in the Tower. When you transmat into the tower, just head over to his usual spot in the Hangar, above the Dead Orbit folks.

For the weapon of the week, Xur is currently carrying the Lord of Wolves exotic shotgun. This weapon packs quite a punch and is best used as a DPS weapon against a variety of targets, whether they be single, large health bosses or crowds of multiple enemies. It has two perks that make this storied weapon such a loved addition to Destiny: Shrapnel Launcher and Release the Wolves.

Lord of Wolves is a shotgun that released in Forsaken that has seen some pretty extensive play in its day. The first perk, Shrapnel Launcher, causes the weapon to fire flaming shrapnel in a burst towards your opponents. Holding down the circle button will activate the Lord of Wolves’ second perk, Release the Wolves, which doubles the amount of damage dealt with the weapon but also consumes twice as much ammo.

Warlocks can grab the Chromatic Fire exotic chest piece this week. This is a somewhat useful chest piece if you need to destroy large groups of enemies at a time, as the main perk, Crystalline Transistor, is an upgraded version of the Firefly perk, which causes enemies to explode when headshot.

Titans this week can grab the Aeon Safe gauntlets. These gauntlets come with the Aeon Energy perk, which gives class energy to nearby allies who are also using Aeon gear. Unfortunately, the exotic perk is terrible. These exotic pieces of gear are generally not worth purchasing or hunting down unless you’re a completionist.

Finally, the Raiden Flux chest piece is for sale for Hunters this week. This chest piece is a solid PvE option, allowing you to make the most out of your Arcstrider subclass. The main perk, Synapse Junction, grants you additional super energy and increased damage for each subsequent strike. Nightfall, Raids, and Warmind activities are all great places to take advantage of this exotic, as well as public events.

That about wraps up the information on the Agent of the Nine for this week. Xur returns with a new host of weapons and armor each Friday, so make sure to find him when the time comes. With Beyond Light out, be sure to check out our Light Leveling Guide! Check back here each week for the newest Destiny 2 updates.

How To Pass Time While Waiting For Rare Spawns In World Of Warcraft: Shadowlands Scourge Event