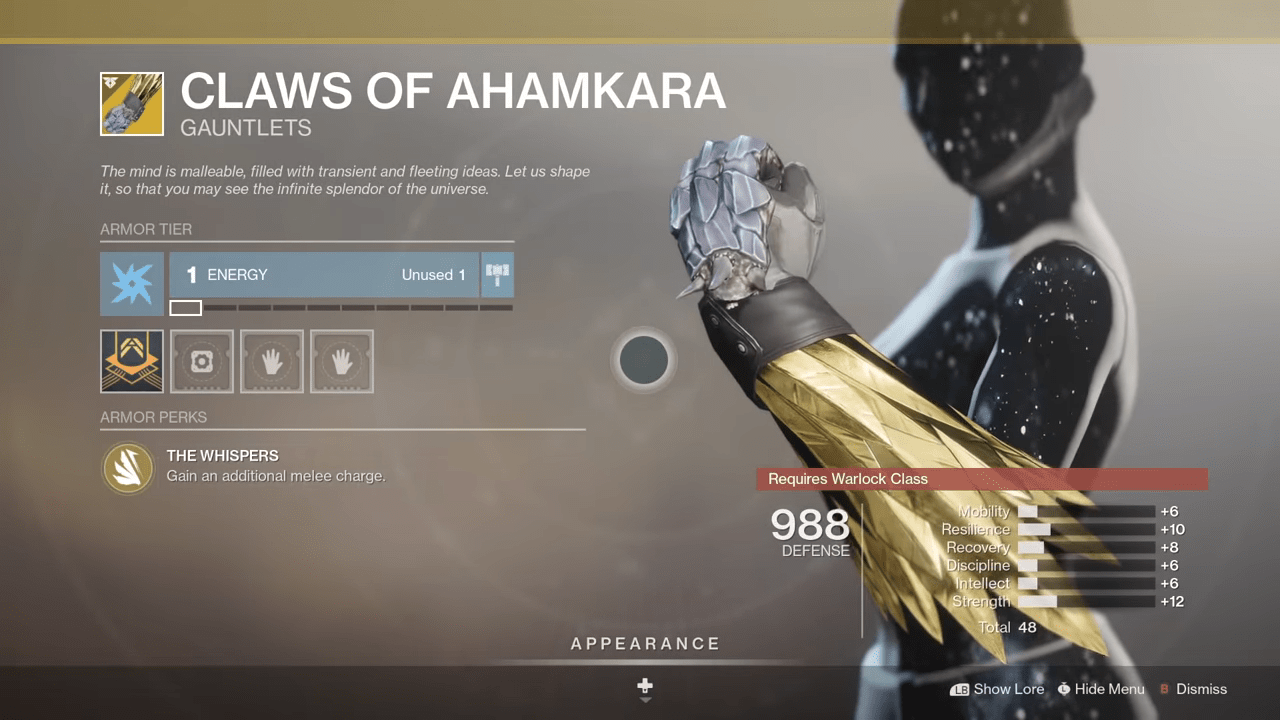 In Destiny 2, even lapsed players tend to log in on Fridays as an exciting vendor rolls into town. The merchant Xur, so-called Agent of the Nine, appears in a set location every week in order to peddle his goods.

The goods in question are definitely worth the trip. Xur is the only vendor for exotic weapons and armor in the game. This week he can be located on Io, nested in his little cave on the edges of Giant’s Scar.

Once you locate the elusive creature, you can trade him a hefty 97 legendary shards in order to nab the coveted Fated Engram. Besides the already grand reward of an exotic engram, this specific engram is only able to drop unobtained weapons and armor pieces.

If that’s not good enough, Xur also offers an armor piece for each of the three classes and a set weapon. This week, he carries The Sixth Coyote, Claws of Ahamkara, and Dunemarchers, alongside the D.A.R.C.I sniper rifle.

Starting with the only weapon of the bunch, the D.A.R.C.I sniper is a powerful choice for single target DPS, although it admittedly is outclassed by other similar weapons like Izanagi’s Burden or Whisper of the Worm.

It’s perk displays data on your target enemy, and increases the headshot damage you deal while the display is up. It takes a bit to start up, however, so it’s best used against slow-moving targets rather than other guardians in the PvP arena.

Shoulder-charge happy Titans will be thrilled with the choice this week, as the Dunemarchers should cater to your every need. The exotic has potential for both PvP and PvE activities.

Just take a look at the description, ”Increases sprint speed. Sprinting builds up a static charge. After melee-attacking an enemy, that charge will chain damage to nearby enemies.”

For Hunters, certain specialized builds are able to make good use of The Sixth Coyote chest piece. The armor gives your guardian a second dodge charge, which works with your choice of Gambler’s or Marksman’s Dodge abilities.

This seems a bit lackluster compared to other powerful Hunter exotics. Keep in mind however, this also works with The Burning Edge ability from the Way of a Thousand Cuts subclass. Combined with a weapon like Polaris Lance you can enjoy nearly unlimited dodges and all the benefits that come with it.

Warlocks can pick up the Claws of Ahamkara gauntlets, which provide a hefty benefit to your character besides just looking cool. The newly added exotic simply grants an additional melee charge, which doesn’t seem all that exciting.

However, Warlocks also have access to some of the most powerful melee abilities in the game, and weapon perks like Swashbuckler can also be of some use. The attunement of Hunger immediately comes to mind, as Devour is a powerful ability with only one melee.

Each week, Xur returns with a new host of shiny weapons and armor pieces for loot hungry guardians to get their hands on. Hopefully, in the future, we will continue to see the newly added Season of the Worthy exotics alongside old favorites.

MineCraft's Bees Do More Than Just Sting, They Allow Your Farms to Flourish!