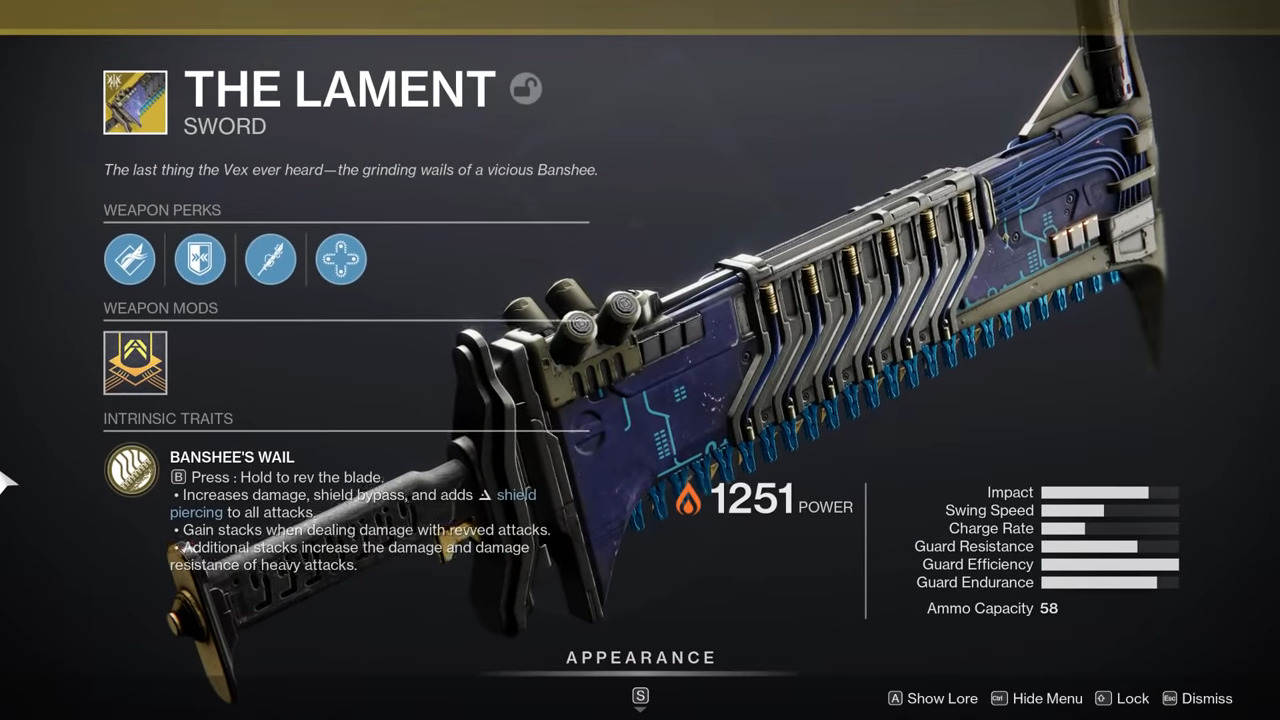 A new exotic quest has been released for Destiny 2, this time in order to receive an exotic sword called The Lament. The weapon is powerful in the right hands and can be “revved up” to increase the weapon’s damage and shield bypass capabilities.

Talk to banshee to receive the first quest step “Lost Lament,” which directs players to find three dead exos on Europa. You can scan these three fairly easily as there are dead exos throughout the map, but an easy three to grab are one on Camdus Ridge, one in the boss room of the Perdition Lost sector, and one in a broken-down building within Eventide Ruins.

A mortal blade, a stalwart shield.

The Lament Exotic Sword Quest is available from Banshee-44. pic.twitter.com/4EGNMpwMFg

After this, the quest will update. The next step to grab this exotic sword is to find the giant exo located in the Exo facility. Within the facility, a new door leading to the right from the main chamber has opened up, and following down that path will take you in the right direction. Conversing with the giant exo head several times will update your quest once more.

Next up is some combat! After a bunch of fetch quest steps, this should be a bit refreshing for hack and slash type Destiny players. The step requires players to kill 100 Vex with swords, and deal 20 final blows with swords to Hydra, Cyclops, or Minotaur Vex enemies. It is important to note that kills for this step only count if you are fighting Vex on Europa.

One easy way to complete this quest is to farm the Asterion Abyss area of the map, as Vex spawn in there quite frequently. Another fairly easy way is to complete runs of the Perdition lost sector, as this provides a near-infinite supply of Vex foes to face. Sword scavenger or similar power ammo finding mods will help with speeding this quest step as well.

Weirdly enough, this quest step can be trickier than the description implies. This is because the game doesn’t count certain enemies towards the kill count for the second objective. Only red health bar enemies make progress towards final blows of Hydra, Cyclops, or Minotaurs, so don’t be surprised to find this step takes longer than anticipated.

Once you have finally reached the goal of 20 final blows, the quest will (you guessed it) update once more. This instruction is a bit more cryptic however and just instructs players to complete an Exo challenge. This can be acquired by talking to Variks. Completing the mission titled “Old Secrets, New Challenges” will complete this quest step as well.

This quest will only show up if you have completed the rest of Varik’s activities, so be sure to do that first if you are having difficulty with this step. The challenge itself is easy to find as it is located on your map. Once inside, players will find themselves completing a small jump puzzle while also trying to stay warm. Defeating enemies and collecting the gambit-esque motes that drop, or sheltering in a warm zone will all help decrease your frostbite level.

The next part of this quest is to kill Vex enemies with finishers. This step is another hack and slash combat-oriented step, and the best methods to complete it are similar to the sword kills from above. This quest step doesn’t specify Europa, but it’s best to fight Vex on the planet just to be safe. This time, more powerful enemies grant more progress, so you don’t have to be choosy regarding who you are killing.

After doing this, yet another step will activate. This time, players will need to head to “The Glassway,” strike activity and locate the blade pieces within. The blade pieces are not a locate-able item like the exo scanning from earlier, instead, it will randomly drop for players from killing enemies within the strike. It might take repeated runs to get this to happen, so just keep at it and be patient.

Once you have the blade pieces, you will be directed to talk to Banshee back at the Tower. Don’t get your hopes up yet, as this quest is not quite finished. It is an exotic quest after all, you can’t expect it to be that easy. Banshee will give players a Broken Blade and the quest will update again.

RELATED: Usurpator Is A Isometric Melee Slasher That Is Planning To Release On KickStarter Before Launching For Fans

Players will now need to head to an abandoned bunker within Eventide Ruins, Broken Blade in hand. Or not actually, you can complete this step without using the Broken Blade if you so desire. This step also does not have a map marker associated, but all you need to do is complete the Bunker E-15 lost sector found within the Eventide Ruins.

Now, for the moment you have been waiting for… almost. Players have to complete one final quest titled Reforging the Past, and this quest will appear on your map after you have looted the lost sector chest from the step above. Completing this mission is fairly straightforward, but it does have an interesting story which we won’t spoil. During this quest, guardians will finally get their hands on the Lost Lament exotic sword.

Should You Do The Flashback Aguero SBC In FIFA 21? Brilliant Card...If You Have A Club Left To Complete It