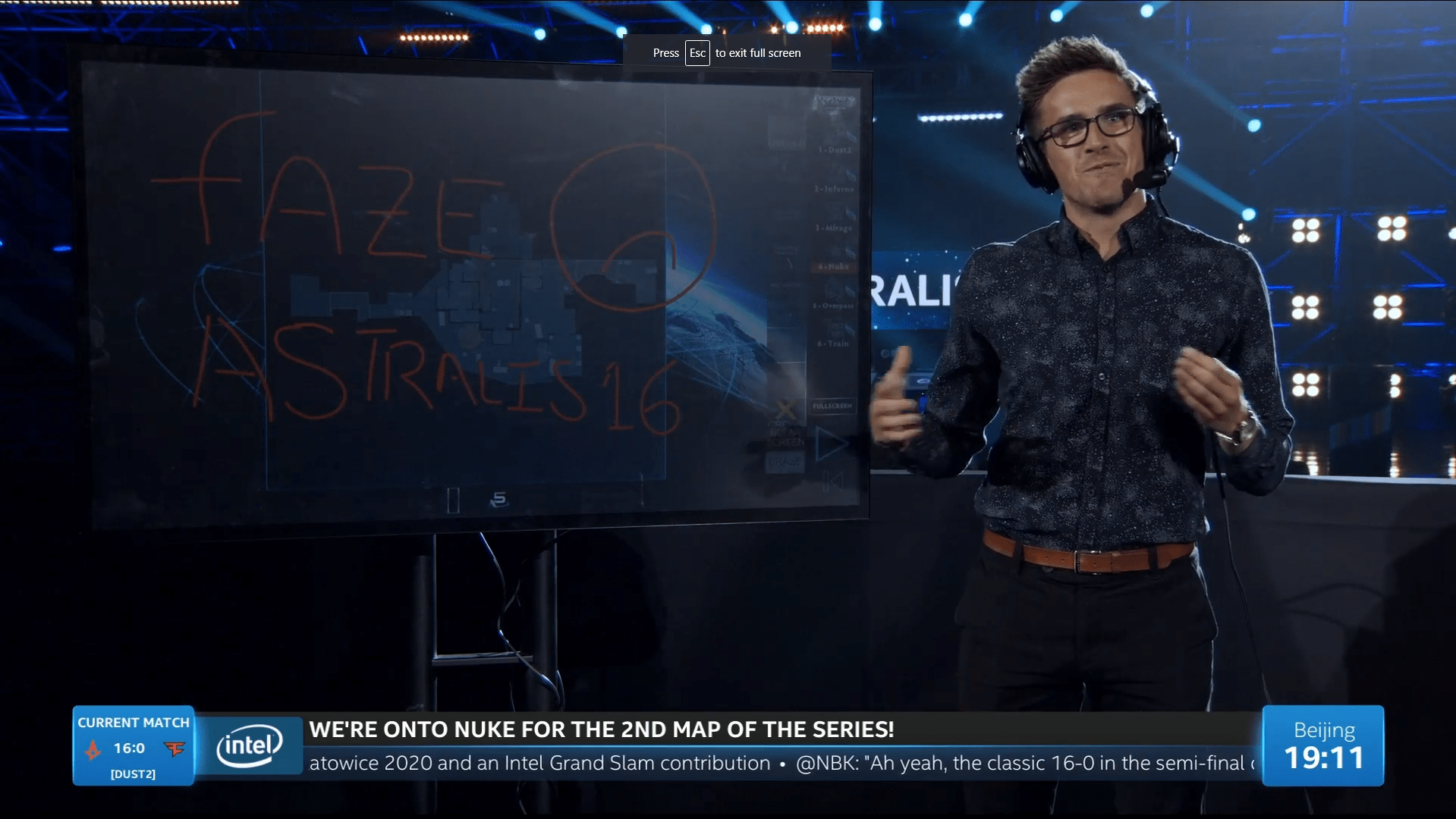 Another morning of Counter-Strike has been completed, this time in the far east; Beijing, China is hosting the IEM Beijing 2019 tournament, playing host to eight different teams from around the world.  These teams have earned the right to compete for a $250,000 prize pool, and four of the teams that entered were sent home packing yesterday.

This morning, two matches were played for the semi-finals, with the winning teams moving to the finals held tomorrow morning, and the losing teams going home with $22,000 each.  Team Vitality was up against 100 Thieves, and Astralis was pitted against the rising FaZe Clan in a best of three.

The day started with the once again rising Team Vitality up against the rebranded Renegades, 100 Thieves.  Team Vitality was favored to win, as they once again seemed poised to restart their domination of the professional league.  Team Vitality’s coach Rémy “XTQZZZ” Quoniam has fallen ill, and the French team were destined to stand on their own for this best of three series.

The first map was Mirage selected by 100 Thieves, who found difficulty in gaining purchase on the map.  With Vitality’s ‘ZywOo’ finding himself as anchor of bombsite A, ‘RpK’ was able to pull massive flanks around the squad to constantly catch them unawares.  ‘Gratisfaction’ from 100 Thieves notably pulled two obscene triple kills in two separate rounds to keep 100 Thieves in their map pick, yet they ultimately succumbed to Vitality at (16-8).

Vitality opted for Nuke which they’ve held a commendable record on.  After the dominant performance in the first map, and with Nuke being Vitality’s pick, casters and fans alike expected Vitality to walk away with yet another win for the French team.  Both teams vied evenly for the map and the first half closed as close as possible, at (8-7).  100 Thieves had a tendency to fight to get as many firearms in the door at once as possible, which consistently allowed Vitality to hold accurate sprays to bring the rounds in their favor.  ‘RpK’ also had an impressive 1v4 clutch, with a bomb plant in the situation as well.  Despite these factors, 100 Thieves were ultimately able to return the favor of map-theft, and it closed (14-16).

Inferno was all that remained, and it appeared as though the gas was simply gone from Vitality’s tank after losing their map choice.  They threw themselves into 100 Thieves CT defense in every way they could figure, and 100 Thieves continued to mop them up on the back of ‘jks’.  It seemed as though ‘jks’ held the entirety of the defense on Inferno for 100 Thieves, with 2 separate quad kills frustrating the Vitality.  Vitality was able to grab two separate rounds in Inferno before falling at (2-16).

Despite the overall scoreline, 100 Thieves seemed to have poor positioning multiple times across the three maps and were saved by ‘jks’ and jkaem’ coming through in clutch moments.  If they can hold tomorrow in the same manner that they held today, there may be a fighting chance.

Astralis were given odds at 1.2/2.8, and they were well earned.  This match is theorized to be one of the quickest semi-final series to occur within ESL, although that has yet to be fact-checked.

Faze received first map pick, and they opted for Dust2.  Astralis decided to hold an absolute clinic on FaZe, and won the map pick (16-0).  FaZe’s resident sniper ‘olofmeister’ was clearly becoming frustrated, as with every purchase of the AWP, he would do little more than deliver it to the feet of Astralis.  Nuke was Astralis’ map pick, and FaZe were able to nab a total of two rounds, ending (16-2).

Dec 5, 2020 Richard Sebastian 23100
Tomorrow, one team will certainly be crowned the most effective VALORANT group in the NA region. After a number of qualifiers as well as thousands...

Nov 15, 2020 Richard Sebastian 10950
Reports have surfaced a day before the League of Legends free agency market opens that 100 Thieves will acquire jungler Can "Closer" Çelik and AD...