Surprise! Two new maps have been added to Counter-Strike: Global Offensive last night, and both play out very differently.

Note that these maps are not yet available for play within official competitive matchmaking, but they are useable as deathmatch maps and scrimmages. If you’d like to experience a competitive scenario within them, you can also do so by playing with bots.

The two maps are Mutiny and Swamp, and we’ll take a brief look at both to explain how they play in their current state.

Mutiny is best explained as a pirate-themed map with sharp angles that make pushing without vision-obscuring utility, such as flashbangs and smokes, a tenuous play. 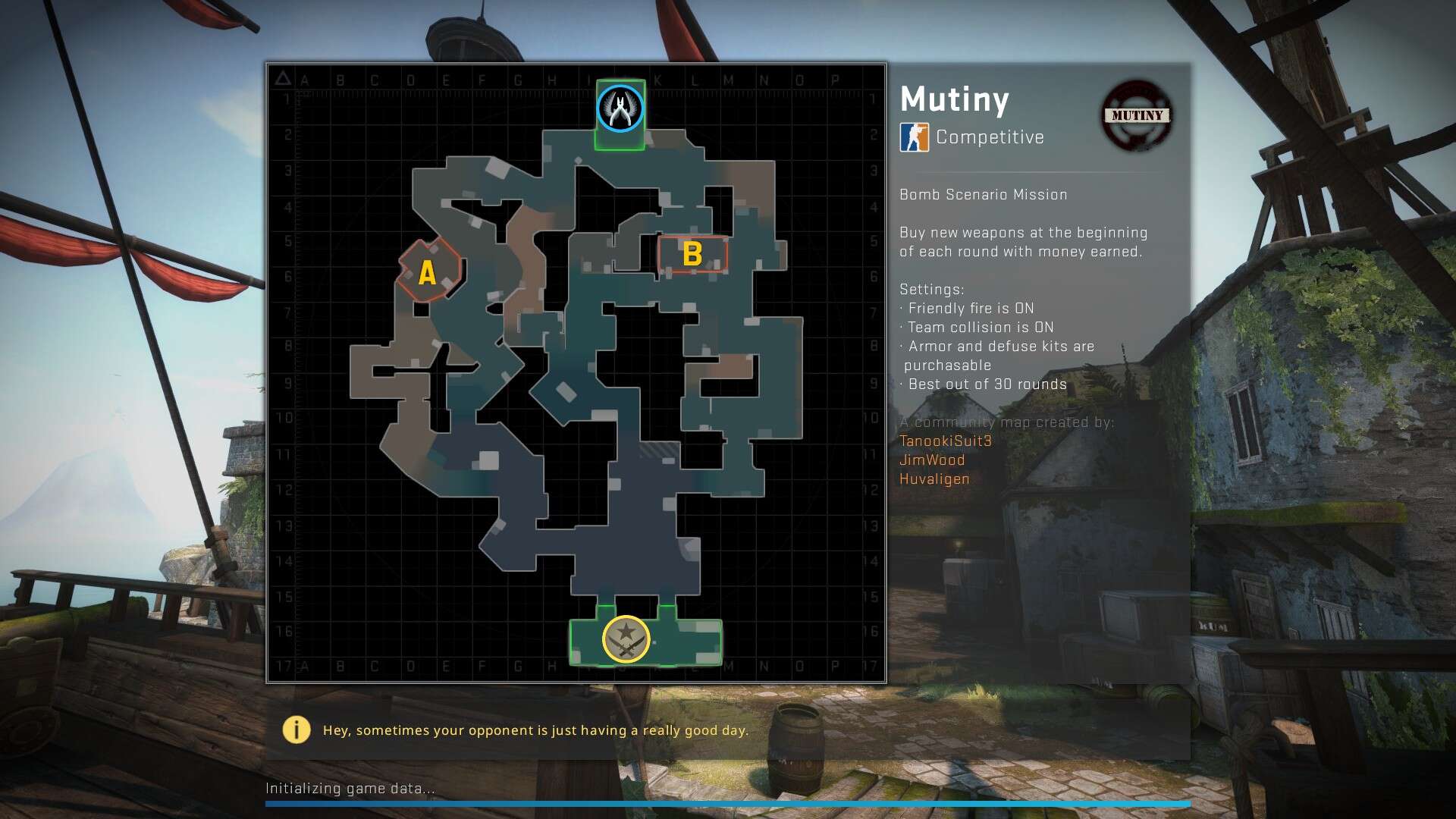 If you’ve played Riot’s Valorant, then you’ll likely be a bit more at home within Mutiny. There are corners that need to be cleared everywhere, and pushing lone-wolf will likely result in an easy kill for the opposing team.

With lush, verdant greens covering large swaths of the community map, it’s also relatively easy for agent skins to use the natural foliage to their advantage, CS:GO’s agent contrast notwithstanding.

Mutiny does have a large number of wall-bang opportunities, however, with CT start into B bombsite and connector to A bombsite being the two primary locations to grab an easy frag in a post-plant situation once you get the feeling for it.

CTs hold an easy advantage in connector at round start, holding elevation and cover versus the T-side needing to wide-swing from connector to attempt to hold for rotations.

Today we have a number of updates. Chlorine and Jungle have been removed from official matchmaking and Mutiny and Swamp have been added. This and updates to Trusted Mode, Decoy grenades, and more can be found in today's Release Notes: https://t.co/1TclOYr2d6

Where Mutiny brings about a whole different level of angles that need to be pied, Swamp brings new heights (heh) to the elevation of maps with multiple tiers overlooking bombsites. 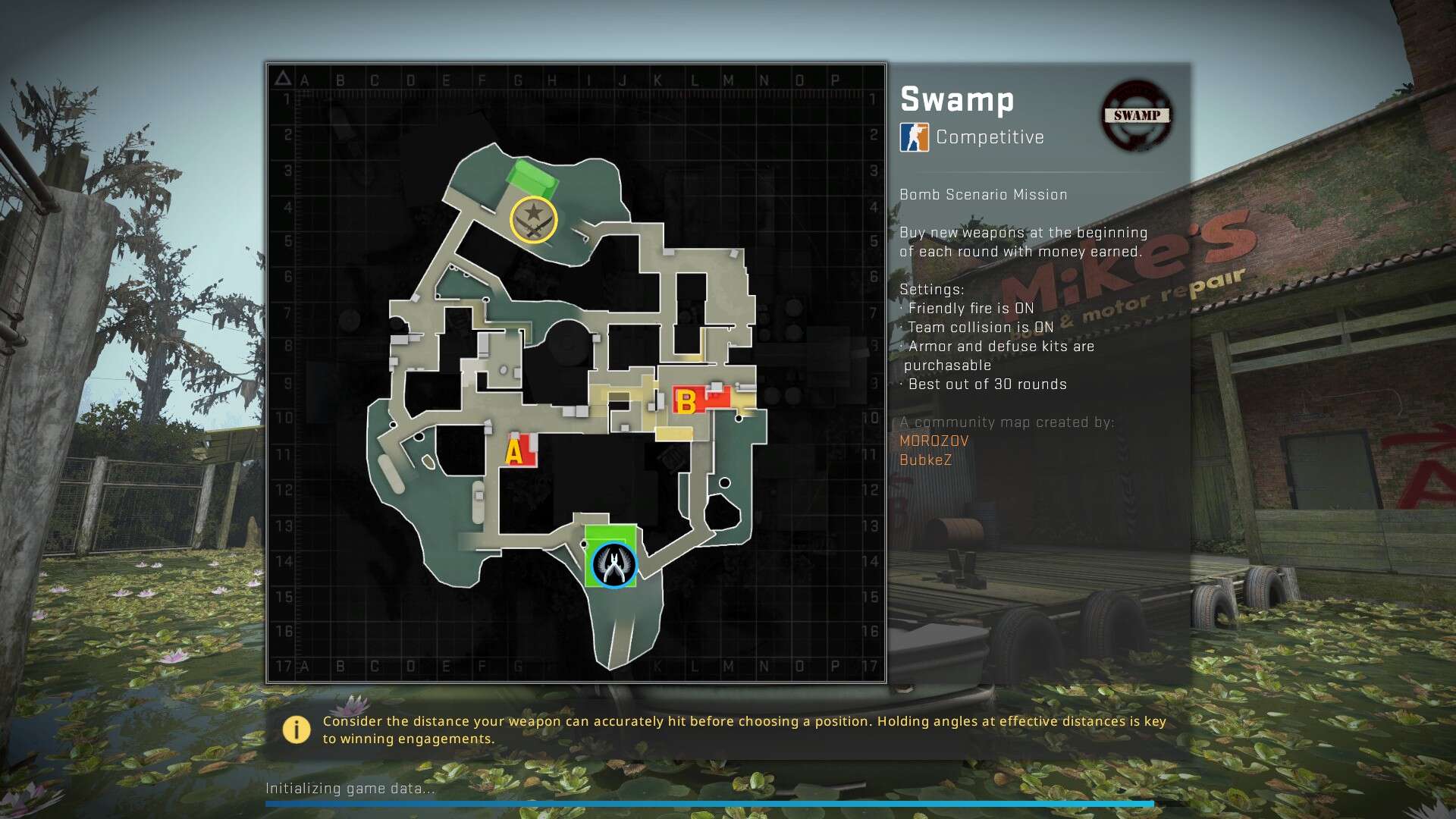 Where Mutiny offers complex angles overlapping each other, Swamp offers various levels of elevation that come into play far more readily than seen in Vertigo – Valve via Counter-Strike: Global Offensive

Bombsite B, in particular, offers a few nasty positions of elevation that can give CTs an advantage if they can scramble up there in time; the primary platform can be reached from both B site and A site, meaning that it’s easy to get flanked if you aren’t watching your back.

A small part of A site can be covered from the central perch, but the fear in A is a large swampy region just to the west that overlooks the bombsite, allowing defusers to get sniped without ever knowing what hit them.

Smoke is the name of the game on Swamp, allowing players to cover angles that offer an easy kill to the opposing team.

For T-sides, if CTs are holding that central high ground with impunity, the A bombsite is going to be your best friend. Toss a smoke into connector and you can easily pick off however trudges towards you; just watch that CT spawn immediately south of the site.

On top of these two new maps, decoy grenades no longer damage teammates on explosion, ensuring you can’t get kicked for team damage if your team decides they’ve had enough of you playing the game with them.

Good things all around: what are your thoughts on the new maps?