There was a bit of a surprise yesterday when Baldur’s Gate 3 finally released into Steam‘s Early Access program at a full price of $60, as fans were a bit upset that they were paying for the opportunity to be a tester for the newest title coming from Larian Studios.

We speculated a bit on precisely why Larian Studios opted for the full-price of Early Access, and it seemed like they had a specific plan as well.

The apparent plan was for a small subset to be willing to bite on the full price for Early Access, and then Larian Studios would then iterate with a core group through bugs and content. Instead, Larian has been overwhelmed with the number of people diving into the title to help refine it through its Early Access journey.

Our sales are insane – this is just Early Access you all. We just wanted to have a nice little community to iterate with. Now what are we going to do?

With this in mind, the developers working at Larian Studios aren’t exactly sitting back on their heels now that they’ve pushed a product outwards: two hotfixes have already been pushed out in an attempt to stymie the litany of bugs and errors that have been cropping up.

The bugs have been admittedly monumental; desync inflicts woe with reckless abandon during multiplayer, bugs affect save games forcing players to replay hours of content that they’ve just cleared, and all of the content clocks in currently around 25 hours from Larian’s own estimates.

There’s a long road ahead for the title, but if anyone is capable of the journey currently it’s Larian.

This hotfix is now live on Steam, will be on GOG soon and on Stadia a little later.

Baldur’s Gate 3 quickly became the top seller on Steam, causing such a great demand that Steam itself struggled to handle the massive influx of purchases; a feat typically reserved for monumental seasonal sales. It’s out-selling Star Wars: Squadrons and Among Us with relative ease.

Precisely how you want to take the news depends on which side of the fence you find yourself; Larian Studios should now have, by all estimates, more than enough capital to ensure that the studio is safe and the developers will be paid in a timely manner to ensure that Baldur’s Gate 3 can be realized to the full vision that Larian Studios has, whatever that may eventually turn out to be.

For users that were somehow diving into the Early Access title expecting a fully-realized title without bugs and glitches, however, are likely disappointed that the RPG still has a long and winding road ahead of it.

Missing the number of signs and announcements that the title is in Early Access, prominently placed just below the purchase option, doesn’t appear to be on Larian.

Activision Blizzard Reportedly In The Process of Dissolving Their Versailles Office, Ending Operations

Dec 2, 2020 Chris Miller 4880
For some, it's a delightful way to romp through what many others would find as blood-soaked streets and dying foes, turned into pristine avenues of...

Oct 24, 2020 Emmanuel Giovanni 40980
In this freshly-launched Baldur’s Gate 3 mod, players get the option to customize a character to their taste when creating a new one. At first,... 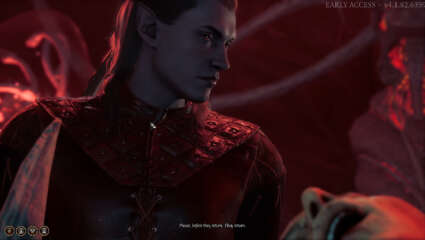 Oct 13, 2020 Chris Miller 7530
When it comes to a storied and legendary title such as Baldur's Gate, players are clearly willing to take a bit of a leap of faith with the title...