For the past three days, Twitch ran afoul of a couple of issues during the day that rendered viewers unable to chat, streams were ended unceremoniously, and it was otherwise another mess during what should be peak hours.

Perhaps it all stemmed from someone using a naughty ad blocker on the website to attempt to watch the content instead of being barraged with ads every ten minutes that lets viewers miss every clutch play and interesting development of the streamer that they’re watching.

RELATED: Riot Games, The League Of Legends Developer, Is The Leader Of Twitch Viewership And Hours Watched In 2019

If you’re frustrated about this, we’ve talked about it multiple times: the only way to bypass this without ripping out your hair is to bite the bullet and opt for Twitch Turbo unless you’re watching all of one streamer.

It is what it is, and much like YouTube gets to play coy with their gamut of bizarre behavior thanks entirely to how popular they are, Twitch is also blazing the trail with unflagging repose; which allows them to be the final say in not hurting the feelings of blind people that are watching video streams that could be offensive by reading the term ‘blind’.

If you are engrained in the cat & mouse chase with Twitch (and for all clarity, feel free to stick it to the man as hard as you can) by updating ad blockers with scripts, you’re likely getting a purple-shrouded message regarding how ad blockers can (apparently) make Twitch unstable.

This is why Twitch has continued to try to edge out their function: it has nothing to do with ensuring that they can get the maximum amount of profit from every viewer, which is an absolute relief. 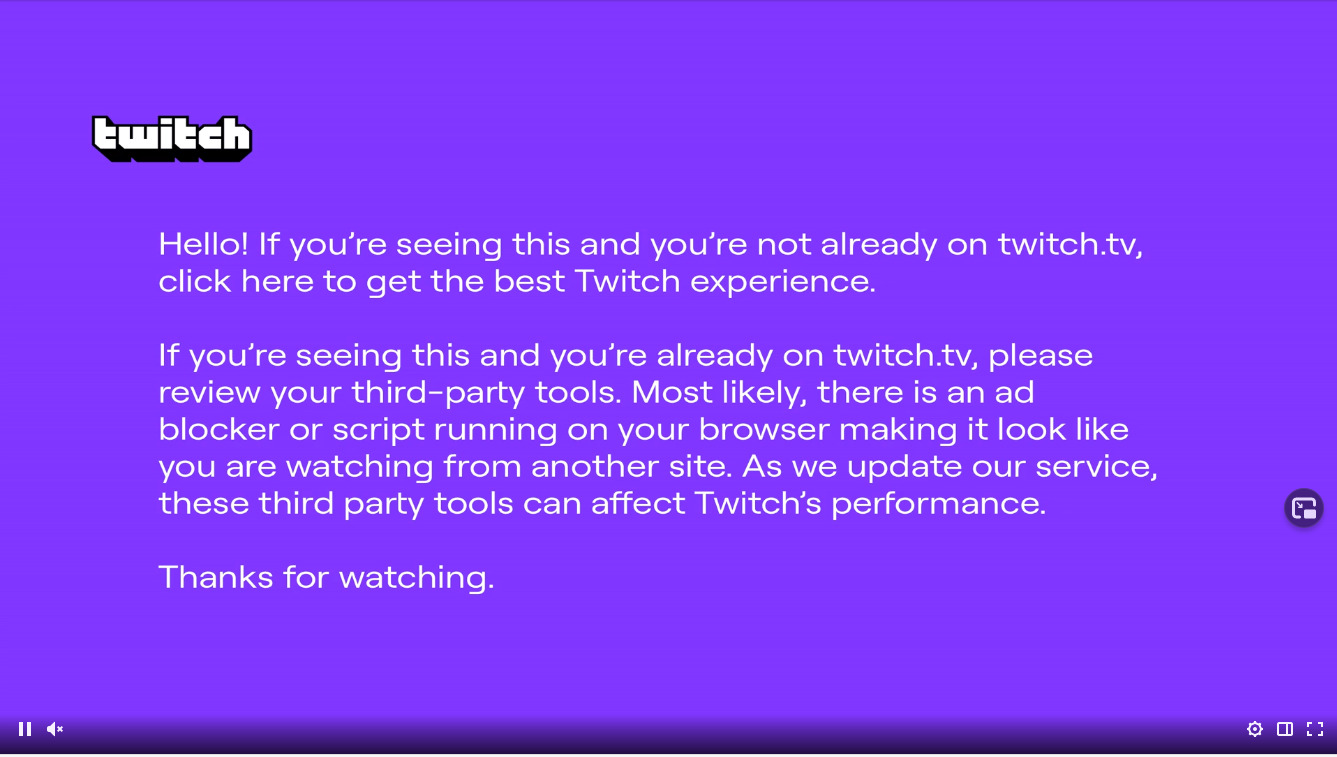 To be fair, ad blockers and the accompanying scripts can interrupt Twitch’s intended performance, inasmuch as Amazon intends everyone to sit through five minutes of commercials every so often, and that’s the entire point of the ad blocker and script, so that viewers can continue to watch the streamer that they’re on the website for.

Yet for as long as Twitch views the only solution to be this full-screen advertisement that blocks out everything that’s happening, they’re seemingly encouraging the public to continue to fight them at every junction, resulting in a frustrating and tedious battle where the only winner is those that don’t log into the website.

With all the screen real estate available, you would think that Twitch would manage to do something aside from blocking the entire reason the website has visitors. Perhaps they could gain more revenue if they received a cut of the OnlyFans promotions that they allow.