A tactical shooter that is still going strong today is Rainbow Six Siege. It has a good mix of detailed progression, varied operators, and regular DLC content that keep returning players excited and new players impressed out of the gate.

The game has always been available on multiple platforms and is set to release on next-gen consoles, including the PS5 and Xbox Series X. It’s also possibly coming to Xbox Game Pass according to the official Xbox Game Pass Twitter feed.

Just recently, the account revealed an image of a siege on a castle and six rainbows up above. That pretty much confirms Rainbow Six Siege coming to the platform. Microsoft hasn’t confirmed or denied these rumors, but it’s pretty clear what they’re trying to market.

That’s great news if you have this platform and haven’t yet experienced the amazing sensation that is Rainbow Six Siege. As far as tactical shooters go, it’s one of the very best. It has only gotten better with time too thanks to Ubisoft Montreal’s constant efforts to elevate the game over the years.

The game is now in year 5 and even still, it’s continuing to receive support and worthwhile content. For many, it’s the addicting tactical combat that brings them back. The battles play out in a way that requires everyone to have their roles locked down.

Before every round starts, you want to have a good strategy and figure out what locations will prove most resourceful. Going at it haphazardly is generally a recipe for disaster and that makes you care about what you do and where you do it.

Ubisoft has continued to add new operators over the years, which keeps players honest in their tactical plans. Every operator has a unique set of skills that have to be used a certain way for them to be maximized.

The looming addition to the platform is pretty big for Microsoft as they get ready to release the Xbox Series X, a next-gen console that is decked out in impressive specs. Xbox Game Pass seems to be a huge selling point for this next-gen console.

Members, for an affordable monthly charge, can gain access to a large library of games that are updated regularly. Rainbow Six Siege is probably just the tip of the iceberg for the platform heading into the new year, which is what you want to hear if you plan on picking up the Xbox Series X or S at launch.

Anti-Venom Is Coming To Marvel Strike Force, So Who And What Is He? Oct 18, 2020 Jeremy Green 2240
A tactical shooter that is still going strong today is Rainbow Six Siege. It has a good mix of detailed progression, varied operators, and regular...

Sep 11, 2020 Chris Miller 2700
In light of Control from 505 Games and Remedy Entertainment being thrown through the mud in regards to precisely what does, and does not, entail... 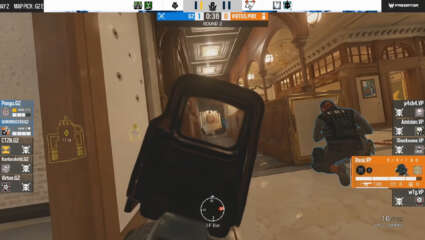 Aug 23, 2020 Richard Sebastian 3070
In first-person shooter games like Rainbow Six Siege and CS:GO, a single-player should not be able to take down a team of four or five. In simple...