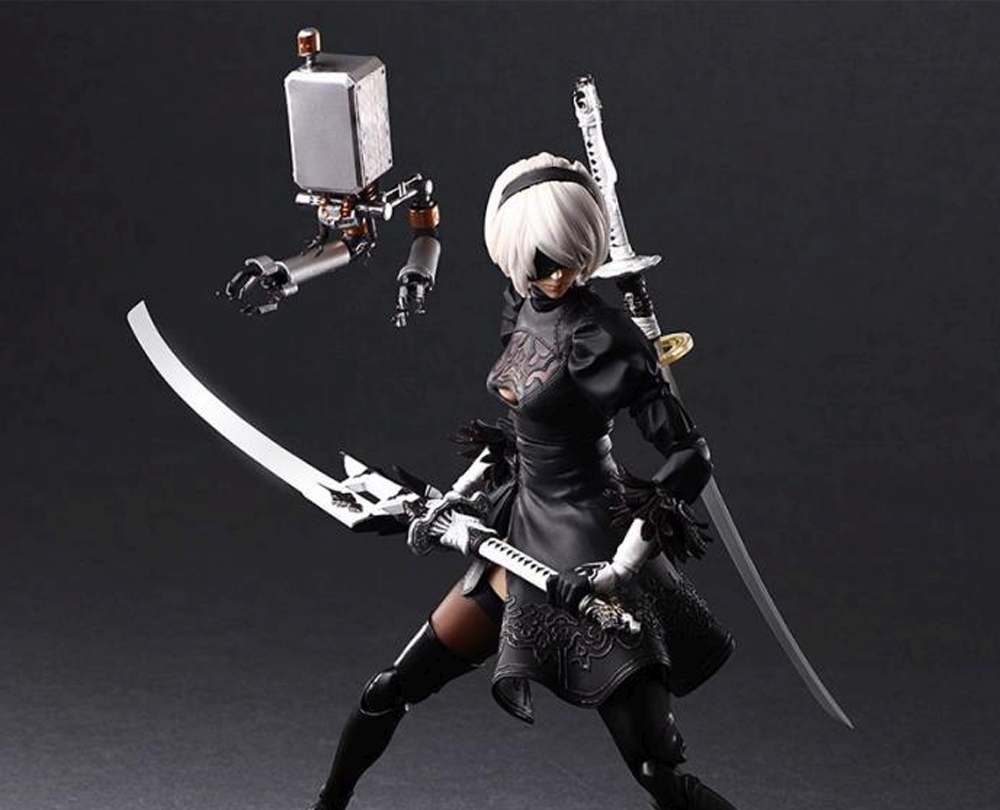 Play Arts Kai has revealed its next highly-detailed figure and, this time, the star is 2B from Square Enix’sNieR: Automata. The Play Arts line is unlike regular figures one may see on a store shelf. These items are highly-detailed and come with multiple accessories to make them an ideal collector’s item.

The 2B figure will ship in her well-known dress and wearing a blindfold. However, the base of the skirt is also detachable to show an alternate outfit for a white-one piece suit. The blindfold is also removable for those who choose to show 2B’s eyes.

RELATED: Gameplay Is Finally Coming Out On Marvel’s Avengers At San Diego Comic-Con, Only For Attendees Though

The figure will ship with multiple weapons with a matching hand accessory to hold each one. The weapons include two swords: Virtuous Contract and the larger Cruel Blood Oath. She can either hold both at the same time or strap them to her back. While 2B is highly-detailed, so are her swords, which are physical versions of the 3D game renders.

An additional accessory is the Pod 042 tactical support unit. Fans of 2B can recreate any scene from the game with the included props. While the figure can stand on its own, 2B is packaged with a stand with 2B’s YoRHA emblem.

RELATED: Final Fantasy VII Remake Part 2 Is Confirmed To Be Under Development By Square Enix

The figure stands at around 9.5″ inches and is made out of plastic. Players can pose the figure in a variety of ways and change out her various accessories.

Play Arts Kai has announced two versions of the future. The Deluxe Edition comes with a full range of accessories, while the Standard edition comes with all of the basics but not at the expense of any details.

Square Enix has continued to announce new products to celebrate the NieR: Automata series as NieR celebrates its anniversary. While 2B is getting the most attention, the company recently announced a Masterline statue that also features 9S and A2.

For those who aren’t interested in statues or figures, but for more practical items, Square Enix has additional items in store. The company collaborated with Suer Groupies for several accessories based on both NieR: Automata and NieR: Replicant.

The Square Enix and Super Groupies collaboration includes a watch, a black tote bag, sling pack, and a scarf. There’s plenty of items for NieR fans to choose from. However, most of the items won’t be released until 2021. Preorders are available for most of the items now.

RELATED: Final Fantasy 7 Remake For PC Already Appears To Be Ready To Play In Some Capacity

Play Arts Kai 2B from NieR: Automata is scheduled to be released in April 2021.

Feb 7, 2021 Lisa Nguyen 7590
Square Enix has announced the release date for the upcoming mobile game NieR Reincarnation. The company is handling the publishing, while Applibot...