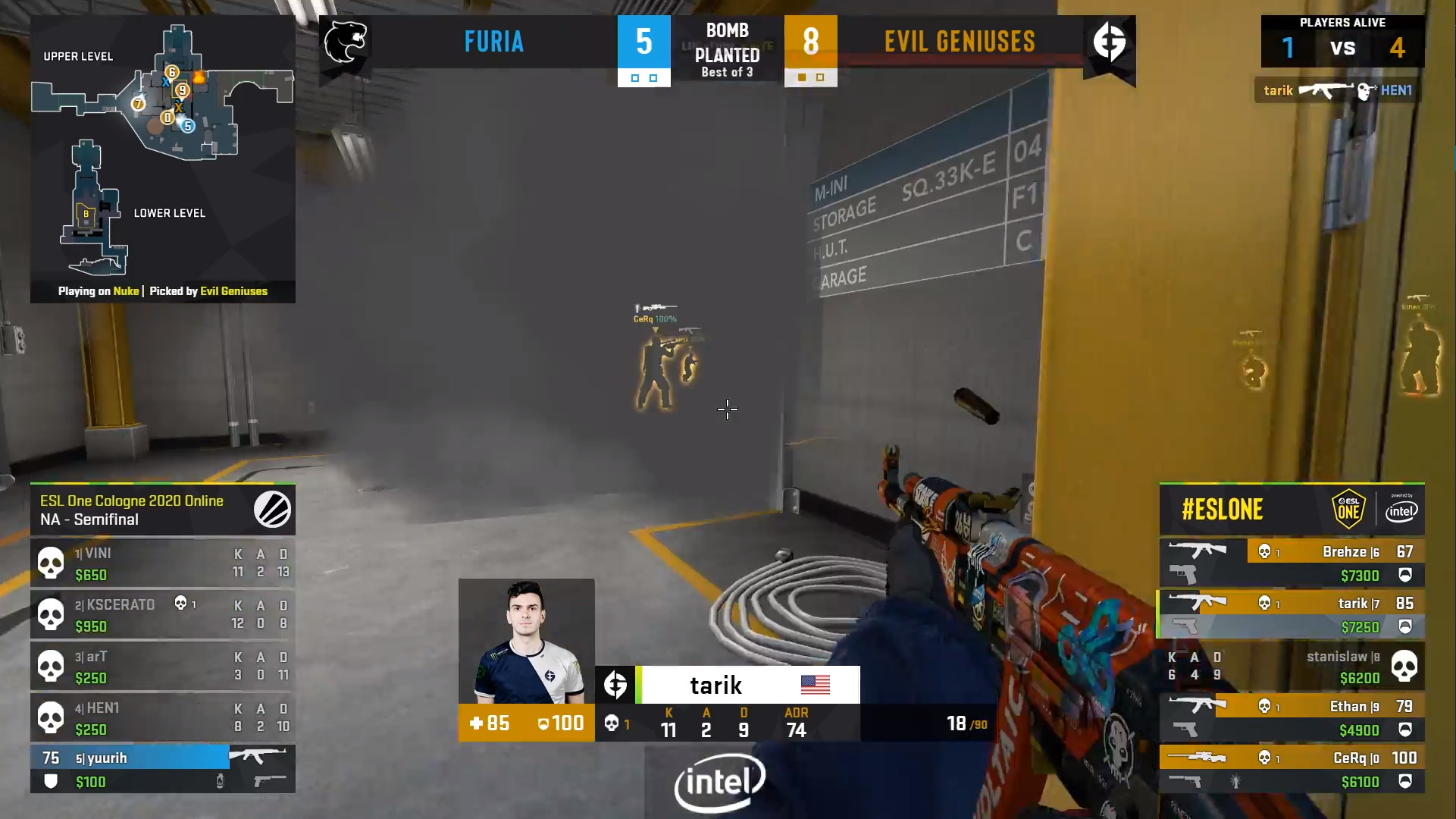 Right now, esports has been the only sporting events that have even been viewable during the pandemic, barring the NBA restarting with strange fishbowl-esque fan cameras around the outside of the court.

Thus, esports (and the game industry in general) have been finding relatively higher viewership numbers as everyone just wants to watch some competition; it’s given TO’s a bit more motivation to continue the show in any way that they are possible to do so, and teams are becoming increasingly eager to use this platform to shine a light on the injustices that are running increasingly rampant in the United States.

It’s worth noting that the teams highlighted in today’s actions are playing in the North American region; thus, they are highlighting injustices within North America. This is an important aspect to explain lest concern-trolling become commonplace.

Today, Furia and Evil Geniuses were scheduled to clash in the semifinals, and they began with an odd gesture that echoes of Chaos’ frankly forceful message.

Prior to the match beginning, all players huddled together around a crown graffitied onto the floor, and the players held up signs that stated that Black Lives Matter.

Taking their stance, @EvilGeniuses and @furiagg take a knee ahead of their match. pic.twitter.com/JSRQNdOzl7

The move has been considered a bit radical by some that oppose the #BLM movement, stating that it’s a decentralized terrorist organization; far more individuals, thankfully, found the movement and the fact that Counter-Strike teams are beginning to throw their weight behind cultural movements rather than flaming other teams.

This appears to be the beginning of a massive movement that began with Chaos EC yesterday, and it’s a far cry from earlier months when teams were far readier to leverage their fanbase for more toxic means.

Yet while some have been put off by this, it’s healing deep rifts within the scene; multiple MIBR fan accounts on Twitter commended Chaos EC for taking a stand against systemic racism.

Aaa a brazilian, we have our in game differences and rivalry. But this situation goes beyond all of that, and this attitude should be taken as an example of humanity and humility.

& despite rivalry, I hope you & other MIBR fans know there is NEVER any hatred towards you. We keep it lighthearted and fun. Brazilians face a lot of racism in the gaming community, it needs to stop and we will do what we can to help.

Of course, there are still the standard bevy of accounts that find an issue with all of this, disagreeing with whatever stance of equality these professional CS:GO teams (which have a massive amount of influence over younger generations) are attempting to put forth.

To play the devil’s advocate, it could be a polarizing issue in the near future; many consider the stance (due to machinations and talking heads on 24/7 news cycles) to be politically divisive, an ‘us versus them’ stance, and the concern that the teams will begin using their fan bases (and ESL as a whole) to further political traction for select candidates is an interesting aspect that may one day, somehow, show its face.

That day, however, is not today; today is about beloved teams offering more focus to a cultural crisis within the United States. And that’s difficult to argue against.

Jan 20, 2021 Chris Miller 11930
It's fair to say that there was a bit of concern in the air as Team Liquid announced a mutual parting with Russel 'Twistzz' Van Dulken as the young...

Jan 19, 2021 Chris Miller 9330
It's difficult to discern precisely who the best player of 2020 would be for Counter-Strike: Global Offensive as the title as it's played...

Jan 10, 2021 Chris Miller 8970
Hopefully everyone made the most of their player break, as the next heap of professional Counter-Strike is already coming flying in, threatening to...