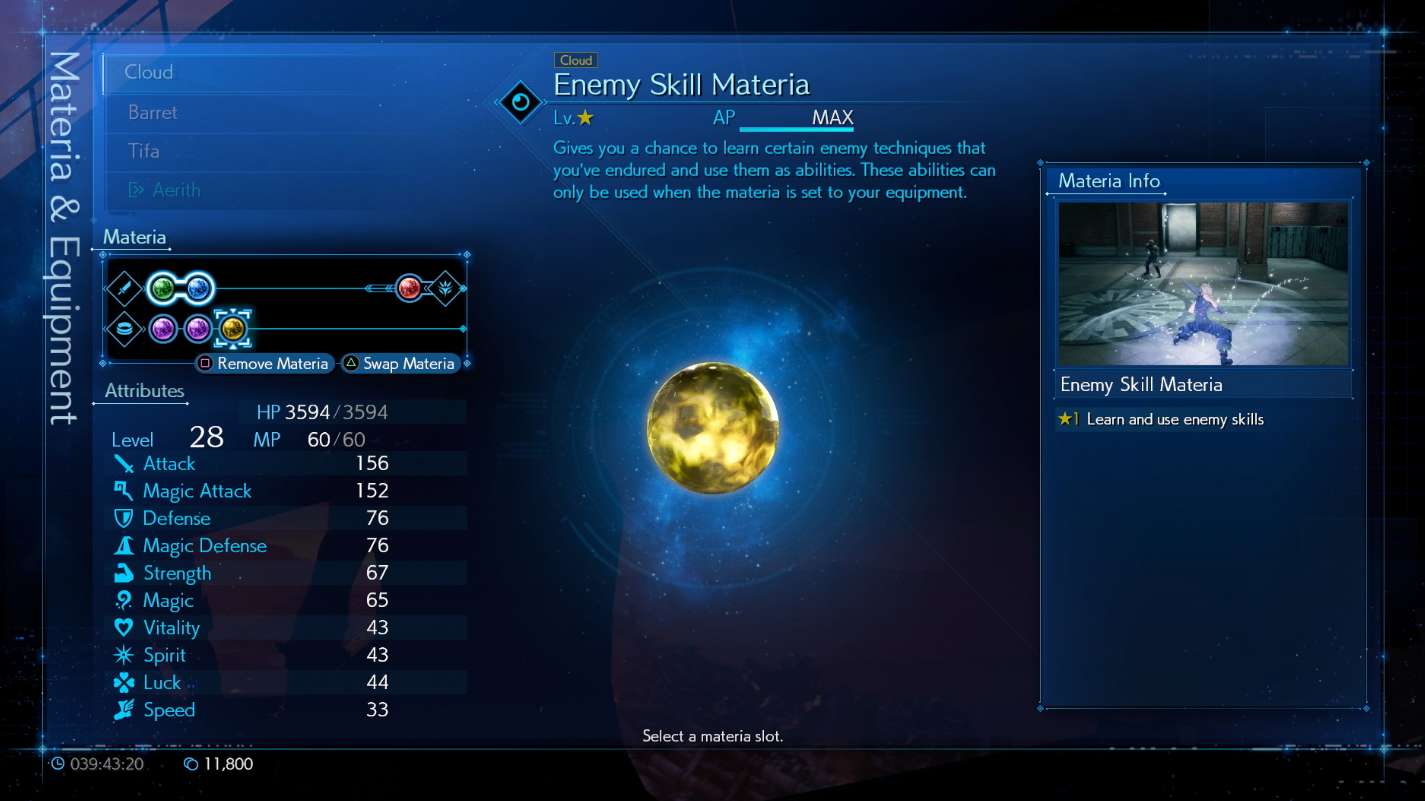 There have been a number of classic elements from the original Final Fantasy VII sprinkled throughout the upcoming Final Fantasy VII Remake. From Limit Breaks to the Materia system, fans of the PlayStation 1 classic have a lot to look forward to when the game releases next month.

Square Enix recently revealed another awesome bit of news for the Remake, via the game’s official Twitter account. The classic Enemy Skill Materia will be making a major comeback.

Using the Enemy Skill Materia in #FinalFantasy VII Remake will allow you to learn certain enemy techniques you've endured with it equipped. Give your foes a taste of their own medicine! #FF7R pic.twitter.com/fFOQEt0ofY

“Using the Enemy Skill Materia in Final Fantast VII Remake will allow you the learn certain enemy techniques you’ve endured with it equipped,” Square said in the tweet. “Give your foe’s a taste of their own medicine!”

In the original game, a character with the Enemy Skill Materia equipped would be learn certain spells or techniques cast by enemy characters in the game. Some of these were small and inconsequential, while some were huge and allowed you to bring down untold levels of destruction on your foes.

The Enemy Skill Materia also involved a lot of strategy. For example, there was one Enemy Skill called Big Guard. It was one of the most effective spells in the entire game and would come in handy, especially with large-scale boss battles. It casts Barrier, MBarrier, and Haste on the entire party.

The only problem was, no enemy in its right mind would cast it on you. That’s why you had to know which enemies had the Big Guard ability and come into the battle prepared. If you ran along the beaches in the Corel Area, right outside of Costa Del Sol, you could encounter a squid-looking enemy called Beachplug.

If you took control of a Beachplug with the Manipulate Materia, you could use its abilities to cast Big Guard on your party. If a party member had the Enemy Skill Materia equipped, they would then learn the technique and you would have one of the game’s most effective spells permanently.

Then you had some massive damage spells that you could learn from bosses. One that immediately springs to mind is Trine, which cast a pyramid of lightning magic on all enemies. You could learn this technique from The Materia Keeper boss fight in Mt. Nibel.

Perhaps the most infamous Enemy Skill was Aqualung, which cast water magic on all enemies for huge damage. This could be learned at the end of the first disc from Jenova Life. All of Jenova Life’s attacks were water-based, so if you went into the fight with the Water Ring equipped, you were essentially immortal.

It will be interesting to see what impact Enemy Skill has on Final Fantasy VII Remake.