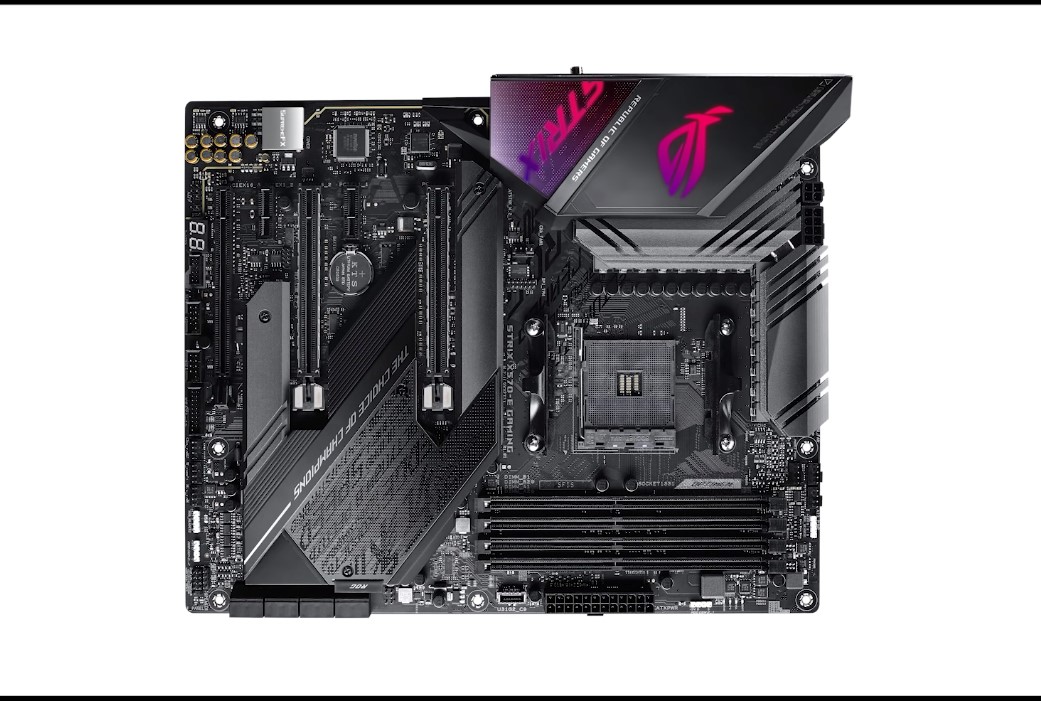 For a mid-range gaming alternative, the Asus ROG Strix brand has always stood out amongst reliable options at a lower price. The Asus ROG Strix X570-E gaming motherboard, in particular, has an ATX-sized board and is one of two models from the same range. The other model, the X570-F possess lower specs, and the X570-E is somewhat at the higher end. Nonetheless, both the ROG Strix models possess great features to support low to mid specs games.

The X570-E is capable of supporting a two-way NVIDIA SLI configuration or the three-way AMD CrossFire multi-graphics card. It has a robust 2.5 GB networking capacity and fully compatible with the Wi-Fi 6 Wireless Interface.

Some of the noteworthy things about the Asus ROG Strix X570-E model is its game-centric Realtek RTL8125G 2.5 GB NIC. It also comes with the Intel I211-AT GB NIC acting as a secondary port control. The motherboard has a powerful wireless capacity thanks to the newly released Intel adapter, the AX200 Wi-Fi 6 802 11ax. There are a total of three PCIe 4.0 slots with the configurations of x8/x8, x8/x8/x4, and x16. It also comes with four additional port sockets coming from the main X570 chipset.

For internal cooling, the Asus ROG Strix X570-E uses two M.2 cooling heatsinks located both at the top and bottom part of the dual PCIe 4.0 M.2 slots. An integrated cooling fan removes heat from the board and keeps the X570 chipset at a stable temperature.

Despite its relatively low price, the ROG Strix X570-E has tons of great features only found in a high-end gaming rig. It has a total of four DDR4 RAM slots able to support up to 128 GB of memory and has eight Serial ATA (SATA) bus interface.

The USB connectivity is one of the strongest selling points of the X570-E gaming model as it is loaded with ports. There are a total of 8 Type A and Type C USB 3.1 slots located at the rear panel. The motherboard is also powered by the SupremeFX audio codec s1220 HD, one of the most exceptional audio components with a 113 dB capacity.

The MSRP for Asus ROG Strix X570-E gaming rig sits at $330 and fills the gap between the mid and high-end models of the ROG Crosshair series. This ROG model is an excellent catch for gamers who are looking for quality gameplay with lots of connectivity ports and a reliable wireless connection.