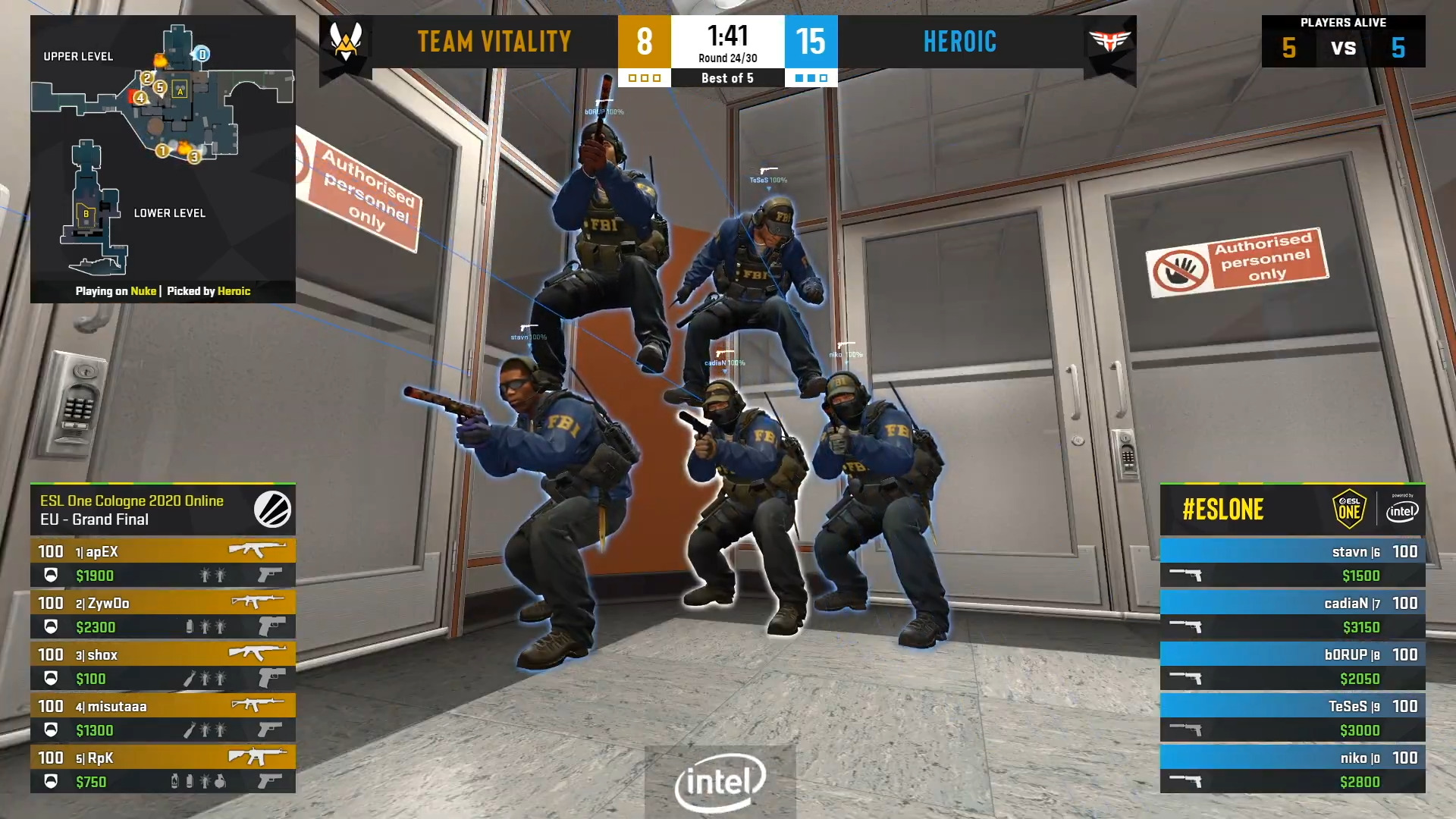 While Evil Geniuses facing off against Team Liquid promised (and more than delivered) and multi-round slugfest between two Counter-Strike heavyweights, the European Grand Finals, unfortunately, delivered something a little bit different.

Many went into today’s match expecting for Heroic to be on the backfoot as Vitality continue their pervasive dominance of anyone that looks in their direction with ZywOo and shox both looking indomitable in recent showings. Then the match started and everything went out the window.

Heroic began their map pick of Mirage on T, where they managed nine rounds in relatively quick succession, stymied temporarily only by Vitality successfully defending fatal funnels to bomb sites. The second half saw a radical shift in the game, however, as Heroic took the CT side and quickly dominated Mirage with an additional seven points while Vitality managed only one (7-16).

Oh this match is looking CHAOTIC going into the second half 👀@stavnCS ends the round with a knife 🔪https://t.co/Z8HYtaIAYd #ESLOne pic.twitter.com/uetdHMUp1w

Niko had the highest K/D spread with +12 (24 kills, 11 by way of headshots) and highest ADR (by a massive margin) with 119. Niko stepping up would be a constant in the matchup between the two European teams.

The second map was Inferno, and Vitality began on T with the same difficulties that they were showing under pressure on Mirage; Heroic picked up five of the first six rounds. Vitality clapped back with four consecutive demolition points, and the first half ended at (7-8). The second half started far better for Vitality, with six points consecutively added, two by way of defusal. A dropped round from Heroic’s thrift turned the tides of battle starkly, however, and Heroic put up the remaining eight points with nary a response from Vitality (13-16).

The third map of Nuke was Heroic’s pick, which made the outlook dire at best for Vitality after a difficult time on their own map pick.

Flashed, through smoke but he still hits the shot 😱https://t.co/Z8HYtaIAYd #ESLOne pic.twitter.com/8LLR195MM2

Vitality started off on CT with four elimination points in a row before Heroic responded with an escalation of force, bringing eight points in a row via eliminations, barring the final point which was a defuse. The two traded the remainder of rounds within the first half which saw the teams (6-9) (nice). Heroic took CT for the second half, and it was over before anyone was ready for it to be as Heroic put up seven rounds, sporadically punctuated by a flustered Vitality (9-16) that comes in second place for the European region of ESL One Cologne 2020 Online.

Stavn again put up a monumental performance on Nuke, where he held the highest KDR of +10 (26 kills with 16 headshots) and highest ADR with 106.1. Heroic easily walks away from the ESL One Cologne 2020 Online European Grand Final in first place. Vitality is bound to be frustrated, as Heroic simply looked in a class consisting entirely of themselves as Vitality struggled to appear competitive.